During the week of November 15-19, pilot RLAs will be conducted in the following 17 counties: Beaufort, Brunswick, Buncombe, Carteret, Cleveland, Granville, Harnett, Henderson, Johnston, Mecklenburg, Scotland, Stokes, Transylvania, Union, Watauga, Wayne, and Wilkes. See the schedule and contests to be audited below. 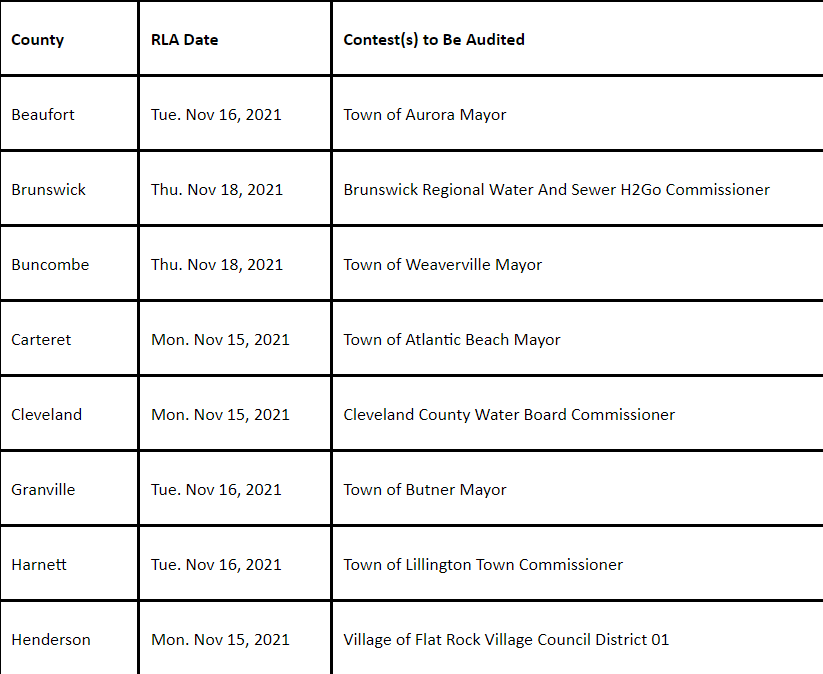 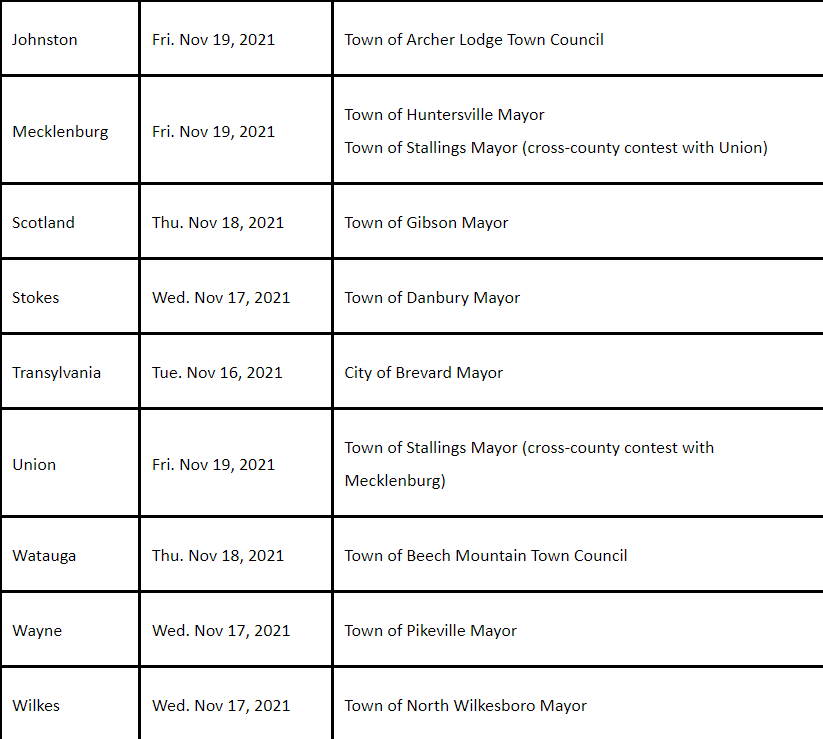 If the pilot program is successful, risk-limiting audits may be conducted in all 100 counties in future elections. These audits would be completed in addition to the statutorily required sample audits and other post-election audits already conducted by the state and county boards of elections after every election.

"North Carolina election officials already test all voting equipment before every election, and conduct a series of audits after every election," said Karen Brinson Bell, Executive Director of the State Board of Elections. "RLAs are another way to ensure that your vote counts."

What is a Risk-Limiting Audit?

An RLA is a hand-to-eye recount of a randomly selected sample of ballots in a contest, which provides strong statistical evidence that the machine-counted results are correct. This is based on a "risk limit," the largest chance that an incorrect outcome of a contest could escape correction by the audit. A risk limit of 5%, for example, means that there is at least a 95% chance that an audit will correct the outcome, if the outcome is incorrect.

RLAs demand that close contests get more scrutiny by requiring a hand count of a larger sample of ballots. If the margin of victory is wide, fewer ballots need to be reviewed to provide confidence that the outcome is correct.

RLAs are possible in North Carolina because every county uses either hand-marked paper ballots or ballot-marking devices that print a paper ballot for each voter. This provides a paper record of voter-verified selections that can be checked against the machine-reported results.

How is an RLA conducted?

The pilot RLAs will be conducted using the "Arlo" risk-limiting audit tool, which is open-source software developed by Voting Works with support from the U.S. Department of Homeland Security.

The software randomly selects an initial sample of ballots to be counted in each county. Based on the results of a hand count of the sample ballots, the number of ballots, and the contest margin of victory, the current risk limit is calculated.

If the outcome is below the risk limit threshold (15% for North Carolina's pilot audits), then the audit stops. If it is above the threshold, a second sample is selected and counted by hand. The process repeats until the risk limit is reached or until a full hand count is performed.

State Board staff will provide a special report on the RLA pilot to the State Board of Elections during its meeting at 11 a.m. Tuesday, November 23. That meeting will include the state canvass of the 2021 municipal election results.

For additional explanation of RLAs, view the RLA flowchart.