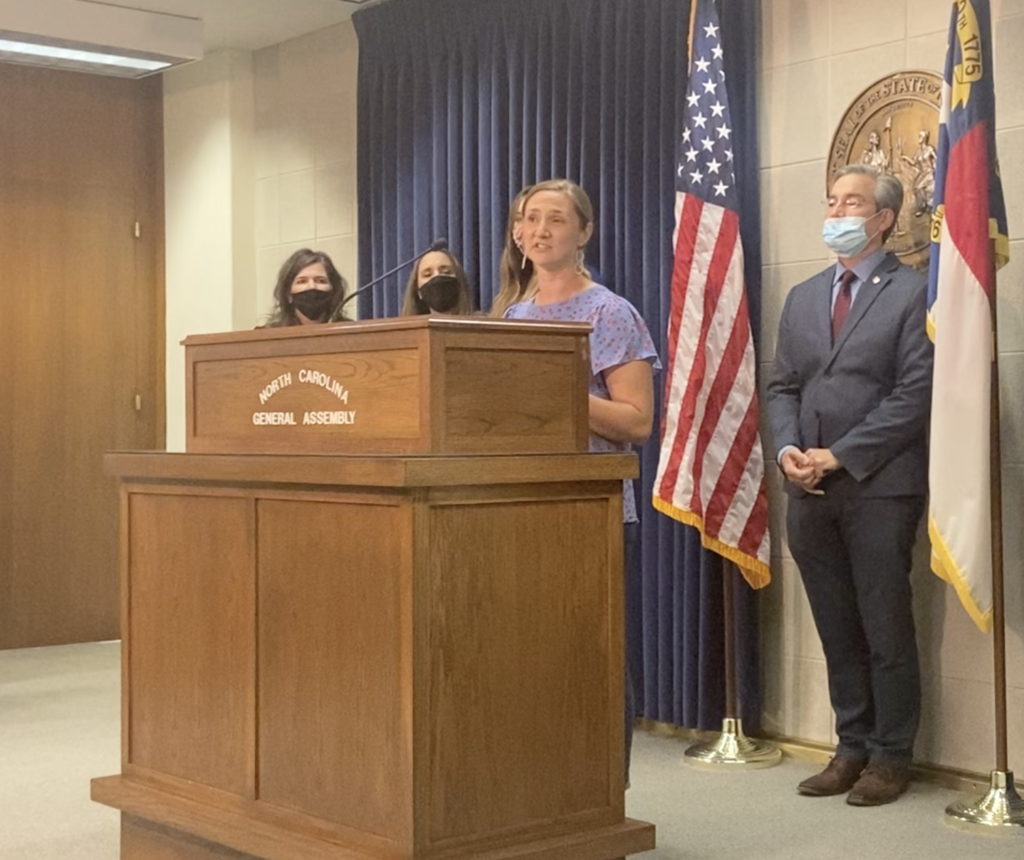 Melissa Mitchell during a news conference on Opportunity Scholarships April 28. (Photo courtesy of Parents for Educational Freedom in N.C.)

Sixty-two percent of respondents favor the scholarship, compared to 28% who oppose it. The poll, commissioned by Parents for Educational Freedom in North Carolina, found an enthusiasm gap, as well, with 36% of those in favor of Opportunity Scholarships expressing that support "strongly," compared to 18% of those opposed to the program doing so "strongly."

Opportunity Scholarships are valued at up to $4,200 a year and help low- and moderate-income families send their children to a private school. Due to a significant expansion included in the new budget, the scholarships will now be worth up to $5,900 each annually. They also will be expanded to new families due to an increased income threshold needed to qualify.

"In our era of deep division and hyper-partisanship, how many issues garner as much support as we are seeing for the Opportunity Scholarship Program?" said Mike Long, president of Parents for Educational Freedom in North Carolina in a statement. "The reason is simple: Opportunity Scholarships allow low- and middle-income families to send their child to an educational choice that's right for them. This program puts into reality the belief that we should fund students, not systems and bureaucracies. North Carolinians realize this and overwhelmingly support the program."

The survey also addressed election-related matters, including voters' viewpoint on the two open seats on the N.C. Supreme Court in the 2022 mid-terms. The results of that election could sway whether the state's top court upholds or strikes down the Opportunity Scholarship Program.

On that question, the survey found that respondents were 2-to-1 opposed to the idea of the N.C. Supreme Court declaring the scholarships unconstitutional. Respondents reported they would vote for a Republican rather than a Democrat for the two open seats by a 51% to 39% margin.

As for likely voters' views on teachers' unions, 39% had an unfavorable view, compared to 36% with favorable and 20% with no opinion.

"What we are finding is that the past two years have been a breakout moment for the school choice movement in our state," said Long. "Even while more and more parents are clamoring for options, the real and substantial progress we are seeing continues to be fought tooth and nail by the education establishment, which wants parents to only have one option - their locally zoned public school. Here is what parents and voters are telling us: That type of thinking does not reflect the varied options and demands of our 21st-century life. School choice is here to stay."

Dr. Terry Stoops is director of the Center for Effective Education at the John Locke Foundation. In addressing school choice, Stoops was clear and succinct.

"Opponents of parental school choice are hilariously out of touch with mainstream support for public and private educational options," Stoops told Carolina Journal.

The poll - conducted Nov. 6-8 by the consulting firm The Differentiators - surveyed 500 likely voters in the General Election. Thirty-seven percent of those polled were registered Democrats, 33% registered Republicans, and 29% registered Independents or with other affiliations.

In a statement, Sen. Deanna Ballard, R-Watauga, said, "A private education shouldn't be available only to those who can afford it. The Opportunity Scholarship program empowers parents with the resources to send their children to the same school as better off families if they choose."

The far-left NCAE is suing to kill the program, a GOP news release says, even as polling shows it's wildly popular and the number of Opportunity Scholarship recipients has grown exponentially since 2013.

Ballard continued, "This is going to the battle line of the next year: parents versus bureaucrats. I side with empowering parents by letting education money follow the child. We need to fund students, not systems."
Go Back