Local Government Commission to Vote on Dissolving the Town of East Laurinburg | Beaufort County Now | The end could be near for East Laurinburg as an incorporated entity.

(Raleigh, N.C.)     The end could be near for East Laurinburg as an incorporated entity. The Local Government Commission is scheduled to vote on a measure to dissolve the Scotland County town. It would mark the first time the commission exercised that power authorized recently by the General Assembly.

The LGC, chaired by State Treasurer Dale R. Folwell, CPA, and staffed by the Department of State Treasurer (DST), voted in November to impound the town's books and assume full control of its finances due to major bookkeeping, banking and auditing deficiencies.

That action followed years of failure by East Laurinburg to file required annual audits or to establish and maintain a proper accounting system needed to track finances and operate under a balanced budget ordinance. A state audit found apparent embezzlement by a former town finance officer whose mother, a Town Council member, co-signed illicit checks.

The resolution to dissolve the town states East Laurinburg provides no essential services to its citizens, and that its financial affairs are not sufficiently stable to continue operations. But first the LGC would have to pass a resolution outlining criteria that qualifies East Laurinburg as an unsustainable municipality in fiscal distress under Senate Bill 314, which was signed into law by the governor on Aug. 30.

The LGC has a statutory duty to monitor the financial well being of more than 1,100 local government units. The commission also examines whether the amount of money units borrow is adequate and reasonable for proposed projects, and confirms the governmental units can reasonably afford to repay the debt.

Among financing requests on the LGC agenda on Tuesday, the city of Winston-Salem is seeking approval for $70.5 million in revenue bonds to improve water metering and billing procedures, sewer infrastructure operation and regulatory compliance. The city also wants the green light to obtain $60 million in limited obligation bonds to refinance previous debt at a savings of nearly $2 million, and to make improvements to Bowman-Gray Stadium, Long Creek Park and Liberty Plaza, construct the Belview Recreation Center and acquire the former U.S. Bankruptcy Court building and surrounding land. The city also is seeking approval of a $20 million increase on a state revolving loan for water plant expansion.

Dare County, and the towns of Duck, Kill Devil Hills, Kitty Hawk and Southern Shores are seeking approval to finance more than $30 million in beach restoration projects. Dare County would use nearly $9.2 million in limited obligation bonds as a contribution to beach renourishment in those four municipalities, and for improvements to the county Justice Center. The towns are seeking special obligation bonds for the beach renourishment and dredging: Duck, $2.4 million and $2.5 million; Kill Devil Hills, $610,000 and $3.6 million; Kitty Hawk, $5.1 million; and Southern Shores, $5.7 million.

The Harnett County Board of Education wants the LGC to approve $14.6 million for an installment purchase on what is billed as a guaranteed energy savings contract employing a variety of energy conservation measures.

The Selma Housing Authority wants approval to obtain up to $17.5 million in financing to be loaned to GREH Lizzie Mill NC to purchase and rehabilitate the 100-unit Redwood Village Apartments.

Other financing items on the agenda include: 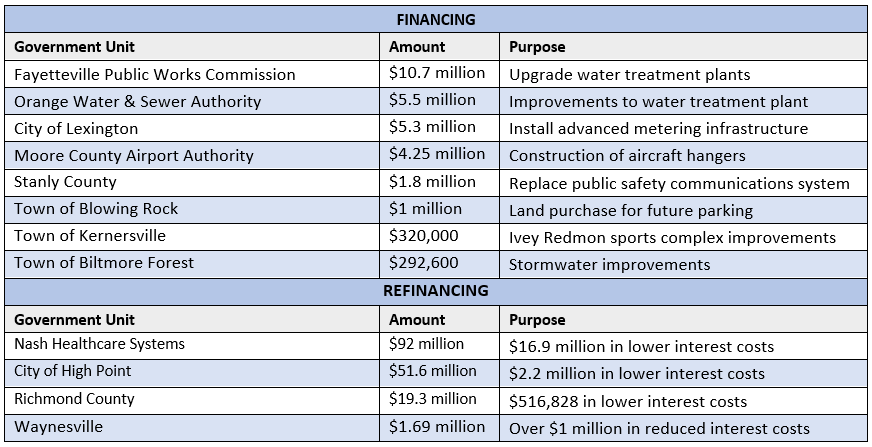