Blundering blindly into an Energy Emergency

This year has been an eye opener in Europe for real people on the results of depending too highly on unreliable intermittent wind and solar electricity to power homes and businesses.  NC is on the very same path thanks to RINOs ramming through NC's Green New Deal, HB951.

A British website, The Conservative Woman, has just published an article describing where the UK is at present as a result of these "net zero" policies, which is aptly entitled "Blundering blindly into an Energy Emergency" which can be read here: https://www.conservativewoman.co.uk/blundering-blindly-into-an-energy-emergency/

This fall, Europe and the UK saw week after week after week of very light winds, dubbed "the big calm", a condition that continues to persist.  Wind turbine electric production plummeted and both Europe and the UK burned through their natural gas reserves to keep the lights on.  Now gas reserves are very low and prices have skyrocketed.  Worse, this condition exists as the UK and Europe enter into the coldest part of the year, when demand will go up significantly.

In the past, the UK has used interconnectors with France to import France's mainly nuclear power to back up the UK's finicky wind turbines, but this winter one of the two interconnectors is down for months for repair.  Worse, an inspection at a French nuclear power plant revealed cracks and now several plants have been closed for inspection, which may take months.  France may not have any power to spare for the UK this winter.

The UK has substantial proven onshore gas reserves that could be tapped with fracking, but the British government has banned fracking.  There is also a new North Sea offshore oil and gas discovery that the British government is unsure if it will even allow to be developed due to the controversy over alleged "global warming".  On top of that, the government wants to phase out gas-fired power plants completely.

All of this means electric rate hikes and the very real prospect of blackouts this winter.  The government is already suggesting raising the electric rate cap by 40%.

The situation is just as bad across the Channel in the EU, where calm winds have also depleted gas reserves and prices are soaring.  Only Poland, which mainly uses coal to produce its electricity has largely been exempt: 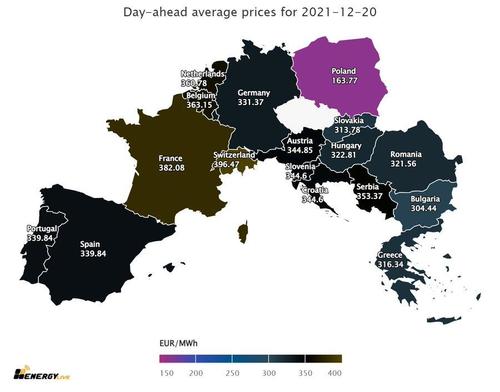 North Carolina is starting down the same path thanks to RINOs in the legislature.  HB951 requires reducing CO2 emissions by 70% by 2030 (compared to the EU's mandate of only a 50% reduction), which will mean a lot more dependency on unreliable wind and solar here in NC.  Can Phil Berger and Tim Moore spell B-L-A-C-K-O-U-T and R-A-T-E H-I-K-E?