The sinking ship of the Democratic-Media Alliance | Beaufort County Now | The Democratic-media alliance gambled everything on 2020 but in corrupting democracy in the name of protecting the country from an enemy of democracy, they tied themselves to a sinking ship.

The sinking ship of the Democratic-Media Alliance 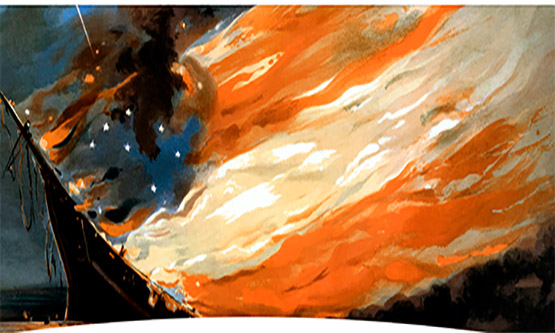 There comes a time when to understand current events one must back up and understand the Big Picture over time.  Conrad Black has done just that, writing at American Greatness .com

Almost no one seems to grasp the colossal irony of the current American political condition. The unique quality of it is that the country is divided between two political forces which, in the tedious hyperbole of contemporary political jargon, view each other as an “existential threat to democracy.” The Democrats can’t sell the bunk that January 6 was an “insurrection;” they can’t wish away concerns about the integrity of the 2020 election. All they have is the tired claim that Trump is a threat to democracy, and in their advocacy of that falsehood, they have made themselves the threat to democracy.

Trump emerged politically in 2015 to universal mockery. Nothing could have been more certain than that this vulgar and sleazy huckster (as he was portrayed,not without some reason), would bomb out trying to recalibrate his downmarket celebrity brand to catapult him into the White House.

As Trump cleaned up in the 2016 Republican primaries, the Democratic strategists reached to the bottom of their campaign bag of tricks. Late in the campaign came the 11-year-old Billy Bush tape, in which Trump had made some inelegant locker-room macho comments about how a celebrity could take almost unlimited liberties with women. This failed to kill him. It was stale, dated, and not exactly a startling revelation.

Next, the Democrats produced a pastiche of lies and defamations collected by a former British intelligence officer that, with the illegal collaboration of the senior intelligence agencies and the FBI, was leaked to the media as the fruit of an intelligence investigation—and thus did not require journalistic corroboration. Despite fervent efforts to get this story out, it had only just broken the surface when Trump won the election.

The Democrats then instantly switched from inevitable Clinton victory mode to impeachment mode and fastened the lead weight of the completely fabricated Trump-Russia election-fixing collusion fraud around Trump’s ankle. When Trump announced that the Obama Administration had been tapping his campaign telephones, the media thunderously declared that he had no proof. Yet when the proof eventually emerged, they had moved on the first of the phony impeachments over an unexceptionable call to the president of Ukraine.

Finally, COVID enabled a mighty smear-job of Trump as “anti-science” and forced an economic and academic shut-down that allowed the hostile media to blame him for the resulting recession.

Although Trump had a successful administration—practically eliminating illegal immigration, unemployment, and oil imports, shaping up the Western alliance, and deterring China, North Korea, and Iran from the endless provocations they had inflicted on previous presidents—it was impossible for him to defend himself against conditions created by the COVID pandemic and magnified by the Trump-hating media. For good measure, the Democrats seized the opportunity created by the pandemic, to alter election and vote-counting laws in the six swing states they focused on (Arizona, Georgia, Michigan, Nevada, Pennsylvania, Wisconsin).

In an election of 156 million voters and more than 40 million harvested ballots (i.e. those of unverifiable validity and cast by people other than those to whom the votes ostensibly belonged), where a shift of 46,000 votes in Pennsylvania and any two of Arizona, Georgia, and Wisconsin would have flipped the election to Trump in the Electoral College, 2020 takes its place along with the highly contested contests of 1876 (Hayes-Tilden), 1960 (Kennedy-Nixon), and 2000 (George W. Bush-Gore).

It is not clear who really won. Hayes and Tilden worked out a deal. Nixon declined Eisenhower’s urging to challenge the 1960 election as he thought it would be bad for the country (for which he has received no credit from all the authors and beneficiaries of the vast Kennedy mythos). Al Gore, at least, received a rushed day in court. Yet the judicial system abdicated in 2020 and the Supreme Court declined to hear the claim of the attorney general of Texas supported by 18 other states against the six swing states that they had violated the constitutional duty to ensure a fair election. None of the issues involving the integrity of the election on constitutional grounds was tried on the merits, and Trump and his followers are right in their anger at not having received a serious judicial hearing.

After the 95 percent anti-Trump national political media conducted Joe Biden’s campaign for him as he hid from the pandemic, the oligarchic social media platform cartel canceled and banished Trump (and the New York Post) from their platforms, Trump’s opponents outspent him 2-1 (including $419 million from Facebook’s Mark Zuckerberg, practically all of which went to Democratic precincts), and scammed the polls in several of the swing states, Democrats and anti-Trump Republicans achieved a Pyrrhic electoral victory. Their only argument for the last six years has been vilification of Trump, and the only fragment of that tired screed that still resonates at all is that Trump is a gangster and a putschist who revealed his tendencies with a supposed “insurrection” at the Capitol on January 6.

In the circumstances, Trump was restrained. The last thing he wanted was vandalism at the Capitol by anyone claiming to support him.

The Democrats, along with America and the world, are now stuck with the most incompetent administration in the country’s history. Biden clearly lacks the mental energy required of such a challenging position, and Kamala Harris seems simply to be a moron. None of their policies attract majority support from the country and their great COVID ally of 2020 is now an albatross around their necks. Inflation is eating the incomes of the middle- and working-classes, the southern U.S. border is open not only to millions of destitute people but to a large number of serious undesirables who are flooding in. China, Russia, Iran, are all exploiting American weakness and the departure from Afghanistan was the greatest military fiasco in U.S. history.

Consequently, Democratic leaders in Congress have effectively given up getting the grossly unfeasible Build Back Better giveaway through, and are pushing their only reelection hope: the Freedom to Vote and John R. Lewis Voting Rights Advancement Acts. These measures would make it difficult to update voting rolls, would ban highly popular voter ID rules, expand mail-in balloting, restrict efforts to validate signatures, and promote ballot harvesting. When taken with the Democratic effort to admit as many people as possible to the United States and permit them to vote without the irritating bourgeois formality of first becoming citizens, this is a recipe for ensuring that the Democrats and look-alike Republicans never again suffer the embarrassment that they did in 2016 of actually losing an election to a conservative opponent.

In all of their antics, from the Trump-Russia collusion nonsense through the very questionable election and now the effort to impose a durable theft of an electoral advantage implausibly disguised as protecting African-American voting rights, the Democrats have forced Republicans to denounce the Democrats as the real threat to democracy.

The national political media, complicit as they are in the Russia hoax and other anti-Trump frauds, have confirmed their embrace of the Democrats, come what may. They are staring down the barrel of a Trump return in 2024, either personally or through a candidate he endorses, in varying states of denial.

The distinguished Brit Hume, not apparently a Trump-hater, still claims Trump has no legitimate complaint over the 2020 election. (He knows better.) Peggy Noonan, otherwise the most gracious of women, writes viciously about Trump while still giving this wax-works effigy of a president advice on how to be a more effective orator. Andrew McCarthy, an outstanding legal scholar and former prosecutor, and quasi-Trump-hater, took the Russian bunk much too seriously, and is now reduced to acknowledging that Trump had just complaints about the COVID-related voting regulation changes, but that they may have been legal. If they facilitated a materially tainted election result (very likely), McCarthy knows as well as anyone that the Democratic vote-rigging derring-do in the swing states was not legal.

The Democratic media have been exposed as morally bankrupt in their rabid partisanship and dishonesty. The Democratic-media alliance gambled everything on 2020 but in corrupting democracy in the name of protecting the country from an enemy of democracy, and in inflicting upon America an almost totally incompetent administration, the Democrats and their media allies tied themselves to a sinking ship.

Donald Trump has many failings but he is no threat to democracy. The elites have failed: the bipartisan political class, cowardly big business leaders, Wall Street, Silicon Valley, Hollywood, professional sports, almost all the political media, and the academy; all have failed miserably. This is now a war to the political death, and the Democrats have had their great feast of Belshazzar, and they will soon learn that they “have been weighed in the balance and have been found wanting” by the people.