Pirates Hold Off Shockers In Opener, 6-5 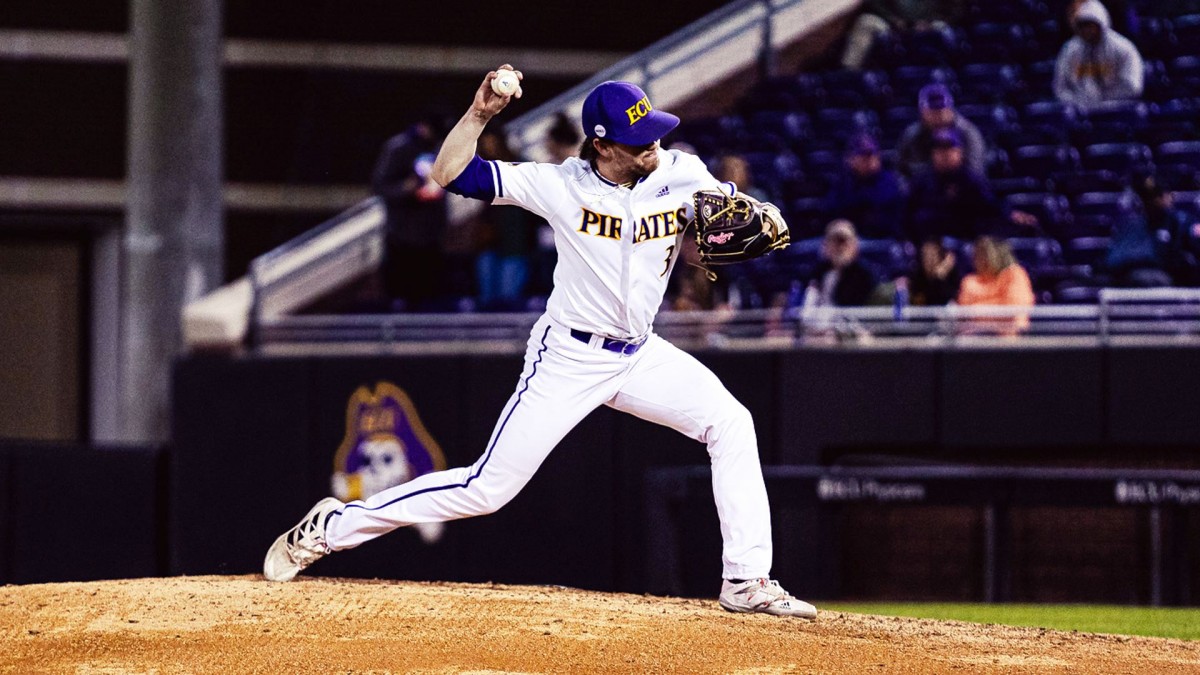 GREENVILLE, N.C.     Making his first-ever Friday night start, Ryder Giles tossed a career-high seven innings with a personal-best eight strikeouts, while his offense banged out 11 hits as East Carolina defeated Wichita State 6-5 Friday night at Lewis Field inside Clark-LeClair Stadium. With the victory the Pirates improved to 17-14 on the season and 3-1 in American Athletic Conference play and the Shockers dropped to 12-17 and 1-3 in league action.

Leading 6-5 in the ninth with two outs, the Shockers had the potential tying run on third in Jack Sigrist and the go ahead run on second in Couper Cornblum when Trey Yesavage struck out Chuck Ingram to end the ball game. Wichita State plated three runs in the ninth getting and RBI pinch-hit single from Payton Tolle, a bases loaded pinch-hit walk by Cornblum and scored their final run of the game on a wild pitch.

Giles (3-0), who worked the longest outing by an ECU starter this season, earned the win allowing just one run (earned) on three hits and struck out eight without allowing a walk. Yesavage notched his second save of the year tossing a third of an inning, while Ben Terwilliger gave up one run (earned) on one hit in his lone frame and Garrett Saylor surrendered three runs (all earned) on three hits in two thirds of an inning.

The Pirates plated three runs in the second inning jumping out to a 3-0 lead. Cam Clonch doubled to right field to start the stanza and moved to third on Alec Makarewicz' single to right. Jacob Starling pushed across the first run (Clonch) with a shot through the left side and Jacob Jenkins-Cowart followed with a double down the left field line scoring Makarewicz. Two batters later, Ben Newton scored Starling on a sac bunt.

ECU added another run in the fourth extending its lead to 4-0. Josh Moylan laced a one-out single to right and moved to second on Makarewicz' two-out walk. Starling tallied his second hit of the night with an RBI base hit through the left side scoring Moylan.

Xavier Casserilla's fourth home run of the season, a shot to left field, put the Shockers on the board and cutting the Pirates lead to three, 4-1.

ECU responded with a run in the fifth pushing the lead back to four, 5-1. Lane Hoover extended his hit streak to 10 games with a leadoff double down the right field line and two batters later, Makarewicz doubled him home with a shot off the right field wall.

Each team scored a run in the eighth making it a 6-2 ball game. Ingram stroked his eighth home run off the season with two outs off Terwilliger, but Jenkins-Cowart's sixth round tripper of the season, a solo shot to right field, proved to be the game-winning run for the Pirates.

Four Pirates registered multiple hits on the night in Jenkins-Cowart, Makarewicz, Moylan and Starling - all with two each. Jenkins-Cowart tallied his team-leading eighth multi-RBI game of the year, while Starling notched his third. In all, seven different starters recorded a hit on the evening.

ECU and Wichita State will continue the three-game series Saturday, April 9 at 4 p.m. (ET), which will be streamed on ESPN+.
Go Back