Published: Wednesday, May 4th, 2022 @ 10:03 pm
By: Carolina Journal   ( More Entries )
Publisher's Note: This post appears here courtesy of the Carolina Journal. The author of this post is Mitch Kokai.

The first year of the Biden presidency has prompted major swings in job approval ratings for some U.S. senators. But neither of North Carolina's sitting senators has seen much impact.

That's according to Morning Consult. The "global decision intelligence company" has released new rankings this week of the nation's most and least popular senators.

Among the most interesting findings, Democratic West Virginia Sen. Joe Manchin's job approval jumped 16 points from the first quarter of 2021 to the first quarter of this year. With a 57% approval rating, Manchin now ranks No. 8 among the 100 senators, according to Morning Consult. Manchin has made news as a frequent critic of fellow Democrat Joe Biden's presidential policies.

The most popular senator, John Thune of South Dakota (62%), saw his ratings jump by the second-largest total, 11 points, over the past year. Republican Sen. Lisa Murkowski of Alaska and Democratic Sen. Alex Padilla of California saw 10-point increases, according to Morning Consult.

On the other end of the spectrum, Democratic Sen. Patrick Leahy of Vermont watched his approval rating drop 13 points during the past year. With 59% approval, Leahy still ranks No. 6 among the 100 senators. Leahy's Vermont colleague, former Democratic presidential candidate Sen. Bernie Sanders, saw his approval rating dip by eight points. With 62% overall approval, Sanders still ranks No. 3 overall.

Retiring N.C. Sen. Richard Burr of North Carolina saw his approval rating climb by two percentage points from 2021 to 2022. That positive change was good enough to rank Burr No. 23 among the 100 senators in terms of popularity shift. Meanwhile, fellow Republican Sen. Thom Tillis watched his approval rating drop by a single percentage point, ranking him No. 66 in popularity shift over the past year.

Neither Burr nor Tillis ranks among the overall top 10 for most popular or least popular senators. That means Morning Consult does not display total approval ratings for either senator in the new report.

No Southeastern senator ranks among the nation's top 10 in overall job approval.

Senate Republican Leader Mitch McConnell registers 60% disapproval, the highest of any senator. With 44% disapproval (along with 46% approval), South Carolina's Lindsey Graham ranks No. 5 among the most unpopular senators in the Morning Consult report. 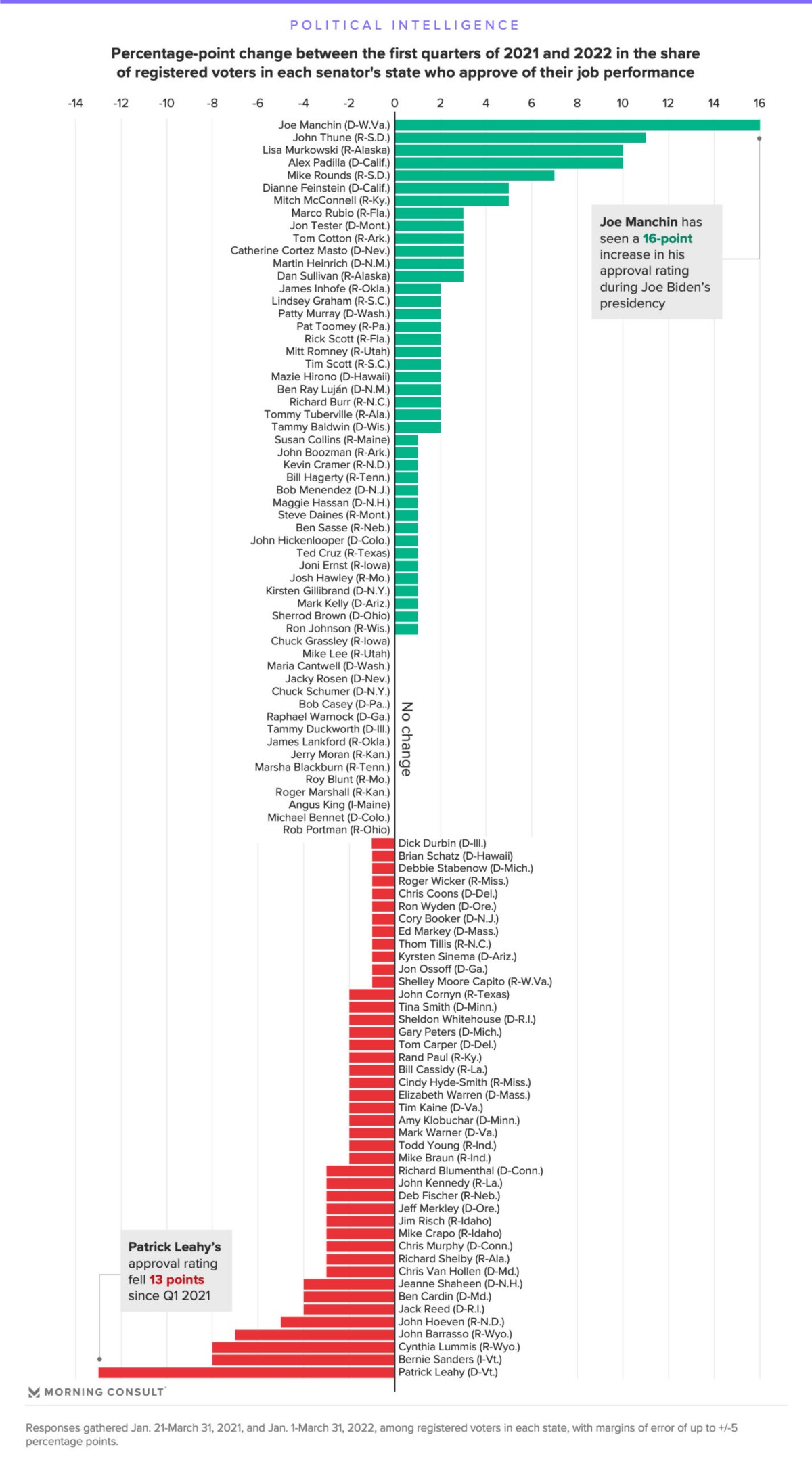