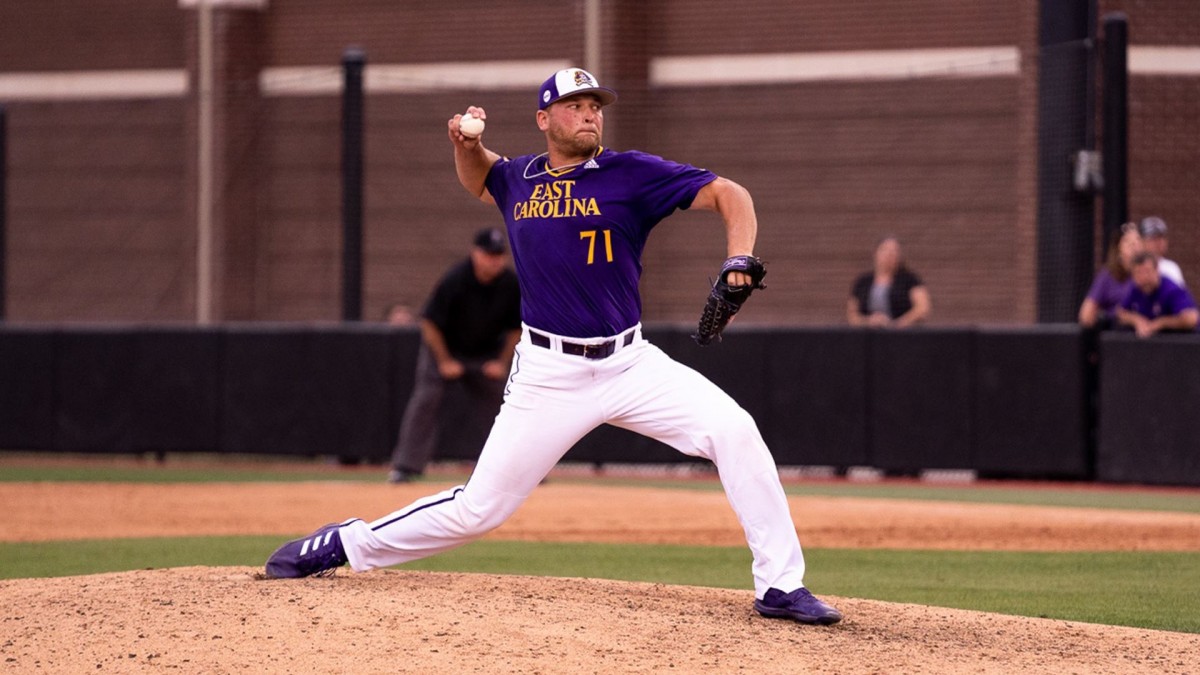 GREENVILLE, N.C.     Ben Terwilliger tossed a career-high three innings and struck out four, while East Carolina's offense erased a one-run deficit late in the game to claim a 4-3 American Athletic Conference series win over Cincinnati Saturday at Lewis Field inside Clark-LeClair Stadium. With the win the Pirates improve to 26-18 overall and 10-4 in league play and the Bearcats drop to 17-23 and 7-7.

Heading into the bottom of the eighth with the score tied at three-all, Bryson Worrell darted home from second when Josh Moylan reached on a Cincinnati error. With two away, Worrell doubled down the left field line and crossed home on Moylan's grounder to first where Ryan Nicholson booted the ball for the game-winning run.

Terwilliger (2-0) earned the win after allowing just one hit and striking out four over his three frames. The right-hander came into the contest in the seventh and after getting a quick 1-2-3 frame, Paul Komistek singled up the middle marking the only base runner he would allow. But Terwilliger got Joe Powell to pop up to second base, Ben Newton erased Komistek when he was thrown out trying to steal second and Griffin Merritt was retired on a strikeout. Terwilliger would retire the side in the ninth to give the Pirates a series win over the Bearcats.

Starter C.J. Mayhue was perfect through four innings before Cincinnati would get runners on and eventually chase him from the contest. The lefty would work four-plus innings surrendering three runs (all earned) on two this with five punch outs. ECU would three additional arms out of the bullpen bridging the gap from Mayhue to Terwilliger getting outings from Danny Beal (0.0 IP, 1 H), Trey Yesavage (1.2 IP, 1 H, 1 BB, 3 Ks) and Zach Agnos (0.1 IP, 1K).

Garrett Harker (2-3) took the loss allowing the run in the eighth (unearned) on one hit with two strikeouts. Starter Conner Linn gave up three runs (one earned) on five hits with a walk and five punch outs over seven frames.

ECU jumped out to an early 2-0 lead in the third inning thanks to a Cincinnati error and a pair of hits. With two away, Ben Newton reached on fielding miscue by Jake Hansen to get things going. Agnos followed with an RBI double to left center pushing across Newton and Lane Hoover doubled down the right field line easily plating Agnos.

Cincinnati would score three runs in the fifth taking its only lead of the game, 3-2. Nicholson led off the stanza when he was hit by a Mayhue pitch then Kerrington Cross followed with a single through the left side putting runners at first and second with no outs. Cole Harting singled home Nicholson and after an ECU pitching change, Wyatt Stapp laced a two-RBI base hit back up the middle clearing the bases.

ECU would tie the game at three-all in the seventh on a double and a pair of fly ball outs. Jacob Starling doubled to start the stanza, his second hit of the game, then took third on Alec Makarewicz' deep ball right field and came home on Newton's sac fly to center.

The two teams will close out the weekend series on Sunday, May 1 with a 1 p.m. (ET) scheduled first pitch and will be streamed on ESPN+.
Go Back