The majority on the Beaufort County Commission is just as corrupt as the Biden Administration | Beaufort County Now | Don't you think it is time to give conservatives a chance to show us what they can do? 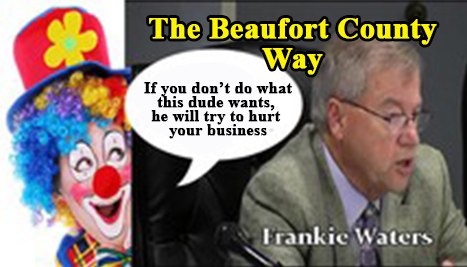 We know, from what we see in Washington, DC that good, fair, and open government is present only when good, fair, and honest men/women are available to make it work.  If government is turned over to weak, conniving and power-hungry men we see the results of that very clearly.  Of course, we have both kinds in Washington, DC and Washington, NC.  The good and the bad are easily identified.  Not by what men say but by what they do.

Frankie Waters is Chairman of the Board of Beaufort County Commissioners.  He is in the lead role to make sure government is run for the benefit of We The People.  It is up to Frankie Waters to make sure government business is conducted in the open without favoritism or prejudice toward any citizen or commissioner.  Frankie is woefully lacking.  Frankie has a lot of secrets.

It was Frankie who supported Sheriff Coleman closing the Beaufort County jail about two years ago with no notice to the board of commissioners.  Coleman claimed the jail doors did not operate properly, so he shut it down. The doors did not operate properly because Coleman had not properly maintained them.  He deliberately failed do his duty.  Frankie,  supported Coleman’s bad behavior in not doing his duty to have the doors repaired and in secretly closing the jail.  That cost the county between three and four million dollars, including the cost of “safe keeping” prisoners in neighboring jails.  The disgusting thing about this was, this closure was never reported to the Board of Commissioners and thus to the public.  Commissioners Hood Richardson and Stan Deatherage found out about what was going on and forced the issue on to the agenda.  We believe the plan was to induce a judge to order a new jail be built based on testimony from Sheriff Coleman and some commissioners, Frankie being one of them.  The point is:  Frankie’s backroom dealing cost the taxpayers millions of dollars.

Frankie strongly supports the improvements to “Broadband” internet service.  Think of broadband as being the local internet.  Frankie and his cronies are putting over four million dollars of county money into broadband improvements.  The money is going to the company that Frankie is stockholder in.  Reflect on these facts and ask yourself:  Does this smell right to you?

Money is piling up in the Beaufort County treasury.  That is a sure sign of over-taxation.  We can easily give a ten percent tax reduction this year.  Frankie has never indicated that he supports this tax reduction.  Recently, all County financial reports are trying to prove we do not have the money.  Don’t believe it.  Frankie and the Gang of Four  (Langley, Booth and Rebholz) are planning to spend that money.  If it is up to Frankie, there will be no tax reduction this year.

Then, there’s the Hospital Trust Fund, that Frankie and his cronies dissolved with the money going into the General Fund.  They promptly wasted that on such things as 1.6 million dollars to an architect for plans for a jail that will never be built.

Frankie Waters, registered as a Republican, just before the deadline so he could run for Commissioner as a Republican. Frankie formed a coalition with the two Democrats, Jerry Langley and Ed Booth along with a nominal Republican John Rebholz, to have majority control of the Commission.  That is how liberal Frankie gets to be Chairman and Langley gets to be Vice Chairman.  This happens with five Republicans on the Board of Commissioners, counting the two RINOS.

Frankie cost this County 100 good paying jobs with his campaign to close the Belhaven Hospital.  It was Frankie and his buddies who secretly sent the building inspector to condemn the hospital in Belhaven.  Shortly after that the judge ruled to lift the injunction and immediately the building was destroyed.  Turns out the building inspector did not legally have the authority to do what he did.  But, he got a lot of support from Frankie.

Frankie announced at the forum held at Beaufort County Community College during April that he ran for commissioner so we would have to build a new jail.  He has not given up.  Hood Richardson made the motion to build out the basement of the courthouse into a jail, at a cost of two million dollars, which the Federal Government gave us in Biden Covid handouts. This addition to the existing jail is all Beaufort County will need for a long time.  Frankie used the jail committee to blow this project into a proposed 14 million dollar three story building behind the court house.  Frankie loves to spend money.  There are no issues with the present jail. It is only half full.

Frankie Waters has deliberately tried to make Stan Deatherage look like he has done some questionable things.   In doing so Frankie has more than doubled the cost of the county website.  Deatherage has acted entirely within the law in doing the website.  In order to try to make Stan look bad, Frankie has cost all of us a lot of money.

It was Frankie Waters backing up Sheriff Coleman that cost us several hundred thousand dollars in the fiasco with school deputies.

There is more to come…

Can Beaufort County afford to keep Frankie waters as a commissioner?  Be careful who you vote for.  There are only two conservative candidates for Commissioner running in this primary.  They are Tandy Dunn and Stan Deatherage.  A vote for Frankie is a vote for corruption…backroom deals wasting YOUR money.