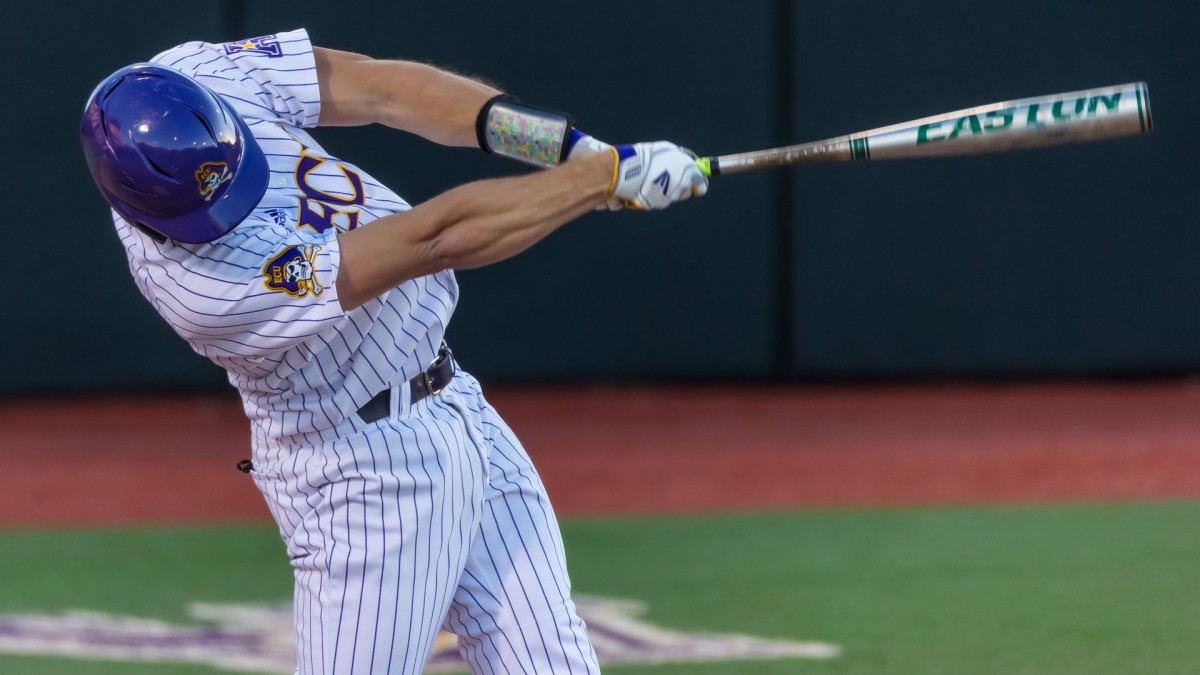 GREENVILLE, N.C.     Jacob Jenkins-Cowart recorded a pair of hits including a game-winning two-run home run in the seventh inning helping No. 25 East Carolina to home-and-home series sweep of instate foe Duke, 5-4, Tuesday night at Lewis Field inside Clark-LeClair Stadium. With the victory, the Pirates extended their win streak to seven games improving to 31-18 on the year, while the Blue Devils dropped to 20-27.

With the game tied at three-all going to the home half of the seventh, Jenkins-Cowart deposited a first pitch offering from Josh Allen over the left field wall for a 5-3 advantage. Lane Hoover singled with one out before scoring on Jenkins-Cowart's ninth home run of the season. RJ Schreck looked to have reeled the ball in just as he hit the wall, but ball was dislodged from his glove for the Pirates second home run of the contest.

Garrett Saylor (4-3) earned the win in relief tossing 3.2 scoreless frames with a walk and three strikeouts. Carter Spivey notched his fourth save of the year giving up a hit, walking one and fanning one in his inning of work. Merritt Beeker was solid in his second career start allowing a pair of unearned runs on three hits with two walks and a career-high five strikeouts in 3.1 frames. Trey Yesavage (0.0 IP, 1 H, 1 R, 1 BB) and Ben Terwilliger (1.0 IP, 1 H, 1 R, 1 BB, 2 Ks) also toed the rubber for the Pirates in relief.

ECU didn't take long pushing its first run across taking an early 1-0 lead in the first inning. Zach Agnos, who pushed his on-base streak to a team-best 23 games, led off with a walk to begin the frame and took second on a failed pickoff by Boucher. After a Hoover walk put runners at first and second, Agnos moved to third on a fielder's choice and scored on Bryson Worrell's sac fly to left field.

Duke evened the game at one-all in the third inning on Schreck's RBI single. With two away, Alex Mooney reached on a single back up the middle, stole second and moved to third on a Pirate error. Schreck plated Mooney with an infield single to first.

Worrell blasted his team-leading 10th home run with two outs in the home half of the third giving ECU a 2-1 lead. The long ball extended his current hit streak to 15 games and his on-base streak to 18.

Duke took its first and only lead of the contest in the fourth after scoring a pair of runs for a 3-2 advantage. Devin Obee drew a one-out walk then moved to second when Luke Storm walked. A Yesavage wild pitch pushed the runners up 90 feet before Obee scored on Wil Hoyle's fielder's choice bunt combined with a Pirate throwing error. Trevor Johnson followed with an RBI single scoring Storm from third for the one-run lead.

The Blue Devils lead didn't last long as the Pirates scored in the bottom of the fourth knotting the game at three-all. Josh Moylan laced a one-out double to left center and after an Alec Makarewicz walk, he would score on Justin Wilcoxen's pinch hit double down the left field line.

Duke would pull within one, 5-4, on Chad Knight's two-out single to left field that plated Johnson.

Offensively, the Pirates out hit the Blue Devils nine to five with Jenkins-Cowart (single, home run), Moylan (two doubles) and Worrell (home run, single) each tallying two on the night. Jenkins-Cowart and Worrell both plated a pair of runs giving them their 11th multi-RBI games of the season.

ECU continues its eight-game home stand this weekend playing host to South Florida in a three-game American Athletic Conference series. First pitch Friday, May 13 is slated for 6:30 p.m. (ET) and will be streamed on ESPN+.
Go Back