‘Inflation Reduction Act’ adds $369B in green spending | Eastern North Carolina Now | On July 27, Democrat U.S. Sens. Joe Manchin of West Virginia and Chuck Schumer of New York announced they had reached a deal on a budget reconciliation bill they were calling the “Inflation Reduction Act of 2022.”

Published: Tuesday, August 2nd, 2022 @ 3:49 am
By: Carolina Journal   ( More Entries )
Publisher's Note: This post appears here courtesy of the Carolina Journal. The author of this post is David Larson.

n July 27, Democrat U.S. Sens. Joe Manchin of West Virginia and Chuck Schumer of New York announced they had reached a deal on a budget reconciliation bill they were calling the "Inflation Reduction Act of 2022."

"The Inflation Reduction Act of 2022 will make a historic down payment on deficit reduction to fight inflation, invest in domestic energy production and manufacturing, and reduce carbon emissions by roughly 40 percent by 2030," the bill summary provided by Senate Democrats said. 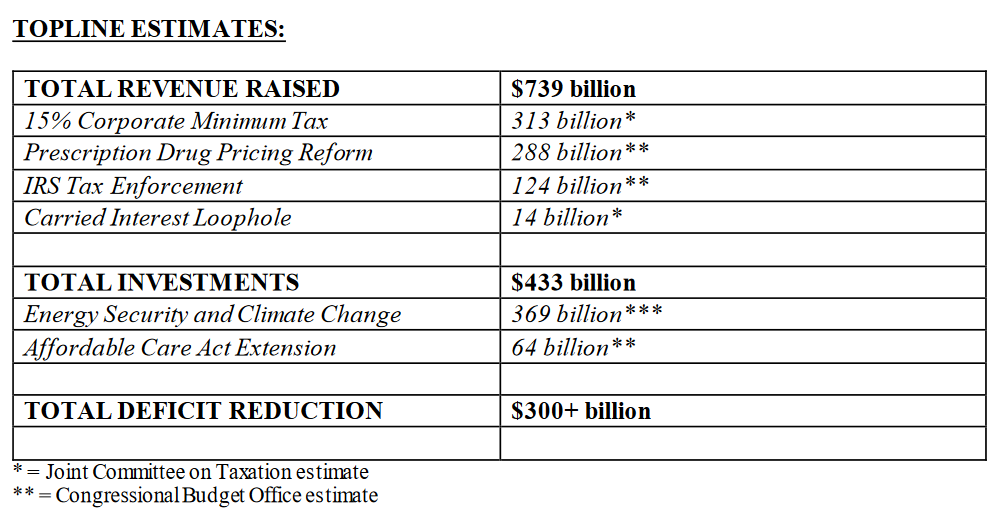 The estimate, as shown above, claims to be able to create $739 billion in revenue through a 15% corporate minimum tax, reforming drug pricing, adding stronger IRS tax enforcement, and using a carried-interest loophole.

But the bill doesn't just raise revenue to reduce the budget deficit as an inflation-fighting strategy. It also includes $369 billion in spending on climate change and green energy. U.S. Sen. Brian Schatz of Hawaii said the plan would amount to the "biggest climate action in history," and would involve spending on "clean energy, clean transportation, energy storage, farming, home electrification, and clean tech."

Update on Inflation Reduction Act: This will be the biggest climate action in human history. $370B for investments in clean energy, clean transportation, energy storage, farming, home electrification, and clean tech. The planet is on fire. Let's get it done.


Paige Terryberry, senior analyst for fiscal policy at John Locke Foundation, had concerns about the green energy spending, saying, "This bill accelerates Biden's war on affordable energy, spending $369 billion to use the government's heavy hand to force decarbonization on all sectors of the economy. This wasteful spending is a political move to subsidize green companies while penalizing others."

Regarding the drug price reform, Terryberry added, "The Senate proposal would require government to intervene and set prices for the top ten most expensive drugs. But price controls reduce supply and investment in research and development of drugs. In the end, patients lose."

Immediately after the bill's outline was released, Republican Senate Minority Leader Mitch McConnell of Kentucky denounced it as further damaging the sensitive economic situation, saying that the added taxes in the plan would kill jobs.

Democrats have already crushed American families with historic inflation. Now they want to pile on giant tax hikes that will hammer workers and kill many thousands of American jobs. First they killed your family's budget. Now they want to kill your job too.


President Joe Biden praised the plan in a statement, saying, "If enacted, this legislation will be historic, and I urge the Senate to move on this bill as soon as possible, and for the House to follow as well."
Go Back