RALEIGH: Governor Roy Cooper announced today the N.C. Parks and Recreation Trust Fund (PARTF) will award over $17 million in grants to fund 39 local parks and recreation projects across the state. The North Carolina Parks and Recreation Authority (Authority) approved the grants at its meeting held on Aug. 26 at the Nature Research Center in Raleigh.

"Our parks and recreation areas are so valuable to our communities and they've become more popular than ever," Governor Cooper said. "These projects we're funding today will give people even more opportunities in North Carolina to build healthier and happier lives."

Local communities applied for the grants to fund land acquisition, development and renovation of public park and recreation areas. Each year, the Authority is required to allocate 30% of PARTF's total funding to local government projects.

The Authority considered 49 local grant applications requesting $20.9 million in total. The maximum grant awarded for a single project was $500,000. Awardees must match funds dollar-for-dollar for the awarded amount.

This year, $17.9 million was allocated to PARTF for local projects-an amount at least triple that of most years in the last decade. With these awards, PARTF has now made more than 1,000 grants to build parks in communities across the state.

"Congratulations to the local governments that received Parks and Recreation Trust Fund grants to invest in the health and quality of life of their communities," said D. Reid Wilson, secretary of the N.C. Department of Natural and Cultural Resources. "The historic increases in funding by the legislature and Governor Cooper will result in more North Carolina families having ready access to outdoor recreation."

The Parks and Recreation Trust Fund is administered through the N.C. Division of Parks and Recreation, which is part of the Department of Natural and Cultural Resources. Local grants are awarded annually by the Authority at their quarterly meeting in August.

Grant recipients and award amounts are as follows: 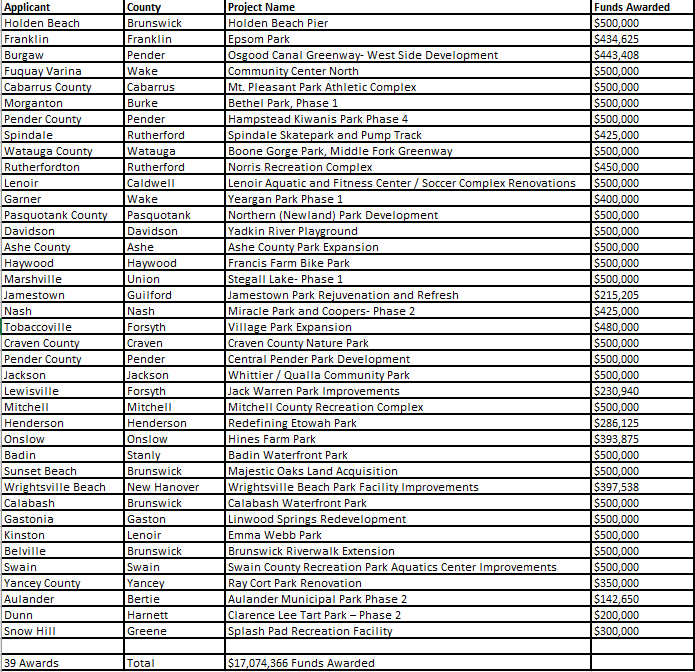