ECU Falls To No. 13 NC State, 21-20 | Eastern North Carolina Now | Following his first game as East Carolina's football coach, a decisive loss at NC State on the last day of August in 2019, Mike Houston vowed to bring a vastly different team into battle the next time the teams met. 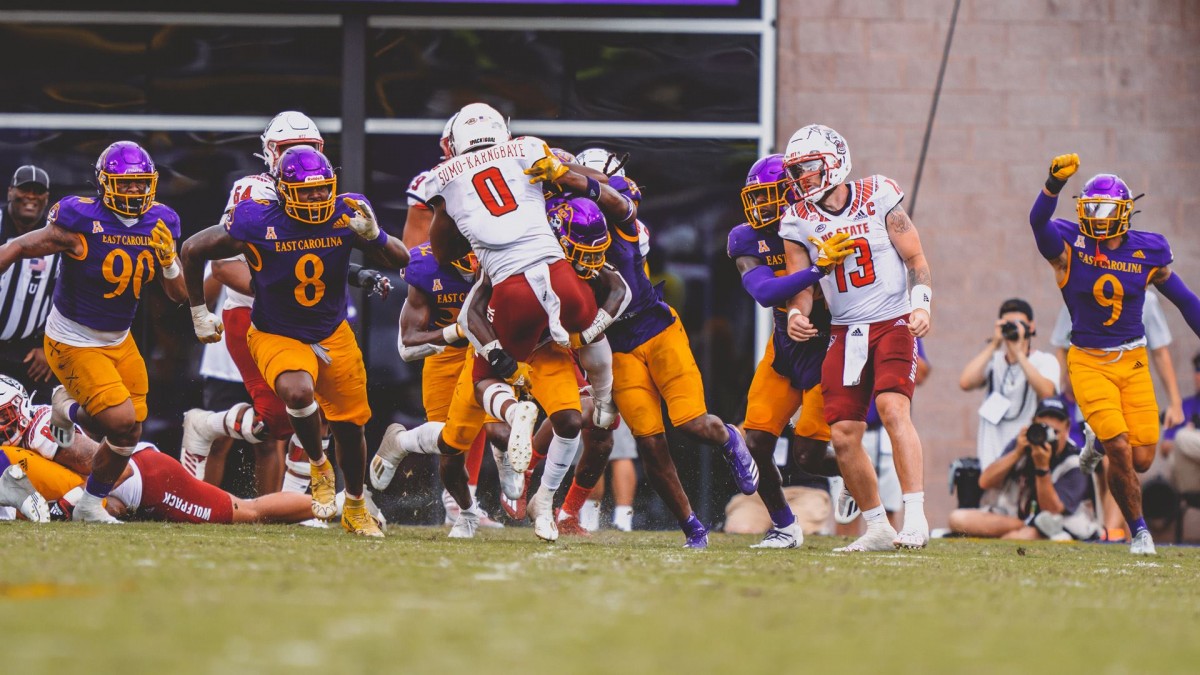 GREENVILLE, N.C.     Following his first game as East Carolina's football coach, a decisive loss at NC State on the last day of August in 2019, Mike Houston vowed to bring a vastly different team into battle the next time the teams met.

That day came on a steamy Saturday afternoon before a record crowd of 51,711 Dowdy-Ficklen Stadium to open the 2022 season. And Houston's words proved prophetic down to the final seconds when Owen Daffer's 41-yard field goal attempt sailed right, leaving the Pirates heartbroken and on the end of a 21-20 loss.

ECU, bolstered by two goal-line stands and an interception, clawed back from a 21-7 halftime deficit and had a chance to tie with 2:58 left, but Daffer hooked his extra-point kick. A chance at redemption came with nine seconds showing, but the miss ended an upset bid of the nation's 13th-ranked team.

The Wolfpack, playing their first true road game season-opener since 2008 (at South Carolina), escaped with their third straight and just their second win in six trips to Greenville. N.C. State had won the previous two meetings by a combined 92-9 score, including Houston's debut.

Saturday's heart-wrenching finish hit hard for Houston, who is 0-4 in season-openers at ECU and has dropped five straight.

"The kids fought their tails off," he said. "They inspire me with the way they play. I know nobody outside of Greenville gave us much of a chance, but those kids never doubted. We should have won the ballgame. We outplayed them. We dominated them physically in the second half. I'm just really hurt for those kids in that locker room right now

"They've brought this program from the depths back to where it was today."

Senior quarterback Holton Ahlers and linebacker Myles Berry remember those days and take pride in resurrecting the program. Both served as game captains and soaked in the moment as they walked out before an electric crowd for the coin toss.

"We were both here in 2018 when Coach Mo (Scottie Montgomery) got fired, actually in this room before the State game, and then we went on to lose, I think it was 58 to 3 at State," Ahlers said. "The program that it is now, it just makes me proud - I'm about to tear up even thinking about it. I looked at Myles when we were walking out there, and I was like, 'Dude, we did it. We brought ECU football back.' Whatever happens in game, look around, the energy's back in Greenville and around this team."'

Berry and his defensive mates made a statement by ending the Wolfpack's streak of 10 consecutive games with at least 27 points, including a second-half shutout. The Pirates limited quarterback Devin Leary to 211 yards passing, his lowest total since Oct. 17, 2020, when he suffered a season-ending injury against Duke.

"The standard that we play with has risen tremendously," Berry said. "We knew it was going to be a big task, but a game is a game. We fear no one. It was just great to see, and I'm proud of the guys and how we competed today."

Ahlers, on track to eclipse nearly every school record for a quarterback, became the American Athletic Conference leader in career completions (833) after connecting on 25 of 41 passes for 267 yards. He overcame an interception on the opening drive to toss a 39-yarder to former high school teammate C.J. Johnson for a 7-0 lead. The offense stalled against an aggressive Wolfpack defense the rest of the half, and State stormed back on a 12-yard pass from Leary to Thayer Thomas and a 24-yard run by Demi Sumo-Karngbaye sandwiched around a blocked punt that Sean Brown recovered for a touchdown.

That special-teams hiccup looked to be a backbreaker, but ECU found life in the second half.

A quick answer by the Wolfpack vanished on a third-down play from the 2 when Jordan Houston's fumble wound up in the hands of Gerard Stringer. Moments later, the ECU defense responded yet again, denying Sumo-Karngbaye on four tries from the one.

Winning the game would have made those stands legendary, Houston said.

The stalwart stands did set the stage for a dramatic finish. After Jireh Wilson picked off a Leary pass and returned it 34 yards, Rahjai Harris scored four plays later from the 3 to make it 21-20. Daffer's attempt to tie hooked low and left.

ECU then forced a three-and-out and started one final drive from its 29 with 2:27 to play. A 37-yard catch and run by Keaton Mitchell got the Pirates in field-goal range at the 31. An Ahlers keeper to the 24 on third down set up the potential game-winner.

After an NC State timeout, Daffer pushed his kick right of the upright.

"He's hurting worse than anybody right now," Houston said. "We've got to support him, and he's got to rebound from this."

Ahlers, always under the microscope as a quarterback, offered his support.

"We're going to need him to win a conference championship; we feel like we have a team to do that," Ahlers said. "I believe in him. I've been through a lot here too. I've been through all sorts of scrutiny and all that too, so I told him I was there for him."
Go Back