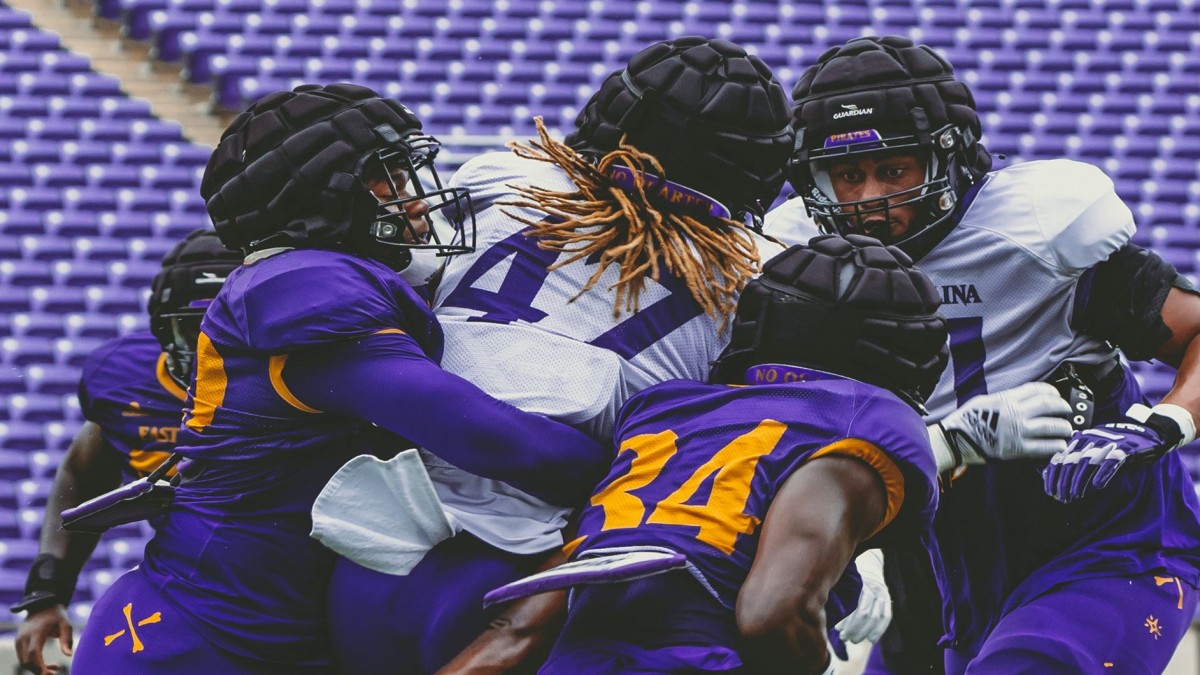 The controlled action, played under overcast skies with temperatures in the 70s, consisted of nearly 80 scripted plays and included all levels of the program's current depth chart - mostly featuring younger players to help fourth-year head coach Mike Houston and his staff formalize the Pirates' first official depth chart heading into the season opener against NC State on Sept. 3 in Greenville.

"I was really pleased with how this week went," Houston said. "Very pleased with the live work we did this week. I was pleased with what our ones and twos did this morning in our last scrimmage. Now it's a chance for them to kind of catch their breath and unplug from football a little bit. They'll get ready to start class on Monday and then we're going to start game prep for NC State."

Alex Flinn paced the quarterback unit by completing all seven of his passing attempts for 35 yards and a pair of touchdowns, connecting with Kerry King on a 15-yard score before finding Brandon Still from three yards out. Holton Ahlers accounted for the third touchdown with a 64-yard strike to Isaiah Winstead.

Winstead finished as the top receiver, hauling in five catches for 81 yards and a touchdown while Andre Pegues added 40 yards on five receptions.

Joseph McKay nearly reached the century mark on the ground, running the ball nine times for 95 yards. Kamarro Edmonds also toted the rock six times for 40 yards. In all, the Pirates racked up 450 yards of offense and 16 first downs on 79 plays (5.7 ypp).

As it did during last week's scrimmage, the ECU defense produced several stops, including a safety by Teylor Jackson and an interception from Malik Fleming. Ty Moss notched a team-high six tackles and added a pass breakup while Fleming recorded five stops and two breakups in addition to the pick. The Pirates were able to apply pressure to the tune of seven tackles for loss, four sacks, three forced fumbles and an interception.

The specialists enjoyed a strong day as Owen Daffer connected on a pair of 37-yard field goal attempts and the punting duo of Luke Larsen and David Chapeau averaged 38.6 yards per boot.

The Pirates will begin their in-season afternoon practice schedule next week beginning with the first day of classes on the ECU campus Monday.

In addition to the scrimmage, East Carolina also hosted its annual media day Saturday afternoon. Houston addressed members of the media before each assistant coach and several players were available for one-on-one interviews.

"Looking back and coming into preseason camp, it's just been an enjoyable camp from the standpoint of having a mature and experienced team that functions the way you want them to and does the things that good football teams do in preparation," Houston remarked. "It was a very solid camp and the best I've had since I've been here."
Go Back