East Carolina Powers Past Old Dominion, 39-21 | Eastern North Carolina Now | First came the rain. Then came the lightning and thunder. The electrifying show didn't materialize in the night sky above Dowdy-Ficklen Stadium on Saturday, however, but on the soggy turf below. 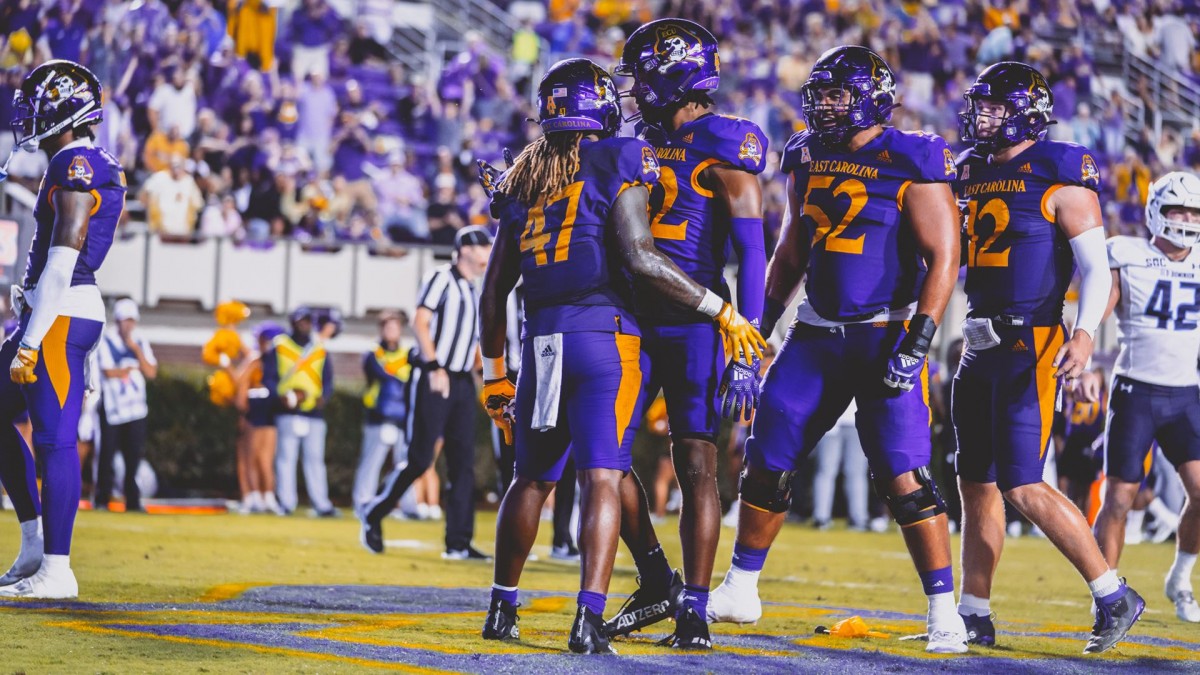 GREENVILLE, N.C.     First came the rain. Then came the lightning and thunder. The electrifying show didn't materialize in the night sky above Dowdy-Ficklen Stadium on Saturday, however, but on the soggy turf below.

Sparked by Keaton Mitchell (lightning) and Rahjai Harris (thunder), East Carolina transformed a tight contest into a dominant 39-21 win over Old Dominion, rebounding from a season-opening heartbreaking loss to N.C. State and even its record at 1-1.

Mitchell's 81-yard dash early in the fourth quarter delivered a staggering blow to the Monarchs (1-1), who were coming off an upset of Virginia Tech, then Harris landed the knockout just 24 seconds later. ECU outscored ODU 23-7 after clinging to a 16-14 lead in the third period.

"I loved the way we played in the second half tonight," fourth-year head coach Mike Houston said. "That's what we want to be. That performance in the fourth quarter, that's what it's supposed to look like. The good football teams, that's what they look like.

"I'm kind of ticked off that the score was as close as it was. That was a pretty dominant performance by our kids."

The running game, limited to 49 yards in the first half, found its footing in the second half as the ODU defense began to wear down, Mitchell, the Pirates' speedster, finished with 160 yards on 18 carries, eclipsing 100 yards for the seventh time in his career, and scored a pair of touchdowns.

Harris, more of a bruiser, finished with 61 yards on 16 carries and added four catches for 14 yards.

"That's a huge thing for us, getting Keaton and Rahjai and those guys rolling," said quarterback Holton Ahlers, who threw for 270 yards and a pair of touchdowns.

Houston knows the importance of having the complementary backs both producing.

Mitchell's run provided the catalyst and followed the pattern of many of his game-breaking runs - he now has 15 plays of 20-plus yards and six of 50 or more in the last two years. With the Pirates leading 22-14 and starting a drive at the 19, Mitchell darted through a hole on the left side and left the ODU secondary in his tracks.

"I told the line to keep going, keep doing what y'all got to do, and they kept chopping," Mitchell said.

"No joke, 30 seconds before he popped, I'm sitting here thinking, 'One of these has got to pop at some point because you felt like you were close," Houston said. "Once he got in the secondary you knew what was going to happen. It was a great job by him of being patient all night and not getting frustrated."

Harris cashed in a fumble recovery by J.D. Lampley moments later with a 15-yard run for a 36-14 lead.

"They made some crucial catches for us. It's cool to see them do as well as they did, but we've got a lot more playmakers that we can disperse the ball to," Ahlers said.

Johnson established himself early with three receptions for 27 yards on an opening 17-play drive that ended with an Owen Daffer field goal. An 11-yard catch on fourth-and-6 moved the Pirates to the 19, but they stalled at the 5.

Daffer, who missed an extra point and field goal in last week's 21-20 loss, received a rousing ovation from the crowd of 36,853 and then knocked through a 22-yarder for a 3-0 lead. Daffer also hit a 32-yarder to cap the Pirates' scoring. He had a pair of PAT attempts blocked, but Houston pinpointed a protection breakdown as the culprit.

Winstead helped key the second scoring drive with a pair of catches, including a 19-yarder to convert a third-and-5. He and Johnson each had a pair of receptions as the Pirates stretched their lead to 16-7 in the second quarter. Winstead picked up a first down with an 18-yard catch on third-and-10 from the ECU 10, and Johnson converted a fourth-and-8 with a 12-yard catch. His 27-yard catch and run on a crossing pattern set up Mitchell's 1-yard run.

"When you get those touches from the jump, it just boosts your confidence and gets you going," Johnson said. "It helps you want to get involved every play."

Ahlers, already the American Athletic Conference career leader in total plays and completions, added to his list of accolades with another solid night. His 39 pass attempts give him 1 ,468 for his career and move him into first ahead of Temple's Phillip Walker. He also moved up to second in AAC career passing yards with 10,756, trailing only Tulsa's Dane Evans (10,782).
Go Back