Earlier this year, I wrote how former congressman and Trump administration chief of staff Mark Meadows may have committed voter registration fraud in North Carolina.

According to a report by the American Accountability Foundation (AAF), an official in the Department of Justice (DOJ) also allegedly committed voter registration fraud. Janie Sitton, who ironically works in the DOJ's Voting Section, voted in the 2020 election in North Carolina while maintaining her home in Washington D.C. as her legal residence:

On 08/19/2020, Sitton registered to vote in North Carolina. As shown by the record of her voting history from the North Carolina State Board of Elections, soon after registering to vote, Sitton voted in the Presidential general election by absentee ballot, and then voted once more in a 2021 municipal election.

After the 2020 presidential election, Sitton abruptly restored her D.C. voter registration in May of 2022.

Looking at voting records from the North Carolina State Board of Elections, "Janie Allison Sitton" (voter registration number 000000136097) voted in Burke County from 2003 to 2010. She next voted in the 2020 General Election and again in a municipal election in 2021. The registration is currently listed as "removed" (see screenshot below). It was listed as "active" when the AAF did their search of Sitton's record, so the record has been changed in the last few weeks. 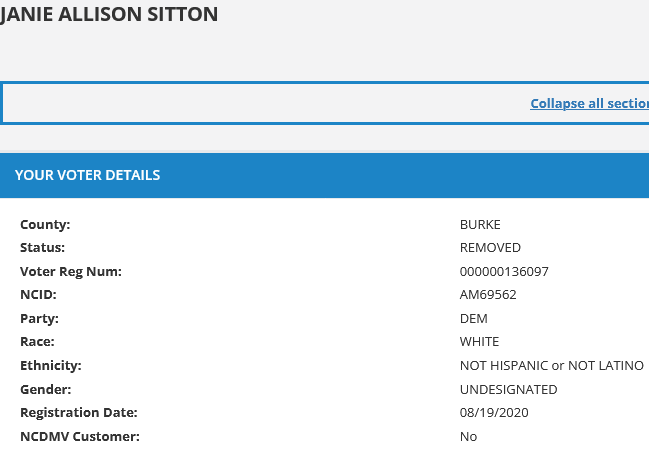 UPDATE: Again, none of Sitton's registrations were simultaneous. Some tweets posted in response to this article indicated that part of the problem was with pre-computerized and legacy registration systems that could not match registrations from different counties.
Go Back