Student Loan Forgiveness: Biden Wants More People Dependent on Government | Eastern North Carolina Now | On Monday, the Congressional Budget Office (CBO) released its estimates on the cost of President Biden’s executive action to cancel student loan debt. They found that this will cost $400 billion. The White House has still not released its own estimate.

On Monday, the Congressional Budget Office (CBO) released its estimates on the cost of President Biden's executive action to cancel student loan debt. They found that this will cost $400 billion. The White House has still not released its own estimate.

The CBO report read, "As of June 30, 2022, 43 million borrowers held $1.6 trillion in federal student loans. About $430 billion of that debt will be canceled, CBO estimates." For the 27 million borrowers with loans from the federal government, CBO estimated that 95% of borrowers meet the income criteria to be eligible for forgiveness, and 45% of income-eligible borrowers will have their entire outstanding debts canceled. In North Carolina, roughly 1.19 million people would be eligible for debt forgiveness, according to the White House.

Without commitment to reduce future spending, less cash going to the U.S. Treasury from student loan repayments means the government will tax or borrow more over time to make up the difference. Much of the borrowed money may be financed by the Federal Reserve, which would expand the money supply and increase price inflation.

CBO estimated the $400 billion cost over 30 years, as illustrated in the below graph. The graph represents the future flow of loan repayments the government will no longer be receiving due to debt forgiveness. 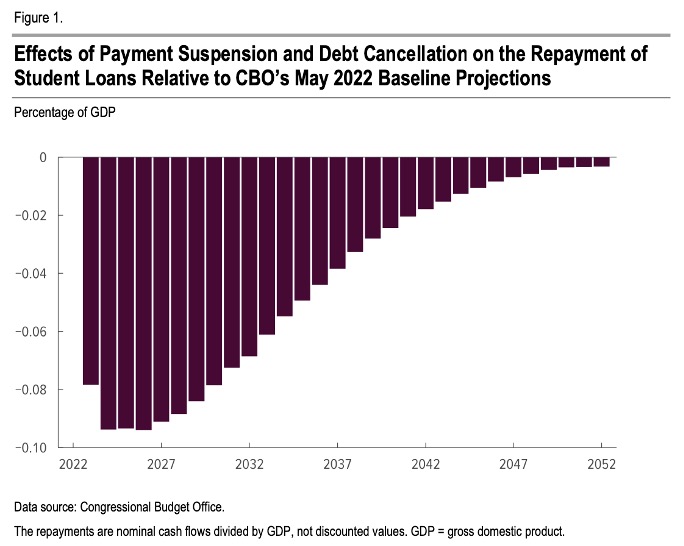 Beginning in March 2020, the U.S. government "temporarily" suspended student loan payments to the federal government, including interest. The Biden Administration's fifth extension of this pause, from September 2022 until the end of the year, will cost $20 billion, according to CBO.

The CBO's report was directed to North Carolinians Sen. Richard Burr (R-NC) and Rep. Virginia Foxx (R-NC-5), given their roles as Ranking Members of the respective Congressional Education committees. In June, Sen. Burr and Rep. Foxx wrote a letter to the Biden Administration's Education Secretary demanding clarity on student loan freezes and forgiveness.

The North Carolinian representatives are not interested in shallow coercions that will ultimately harm future taxpayers and inflate the cost of college.

Rep. Foxx, in response to the CBO report this week said, "CBO's $400 billion cost estimate shows this administration has lost all sense of fiscal responsibility. ... Rather than working with Congress to bring down college costs, President Biden has opted to bury the American people under our unsustainable debt."

Sen. Burr released a statement saying the $400 billion is a "cost that will be borne by working Americans who chose not to go to college or who responsibly paid off their loans. Every American should be outraged by the President's cynical ploy and by the real cost it places on those who stand to benefit the least."

Welcomed pushback came on Tuesday as Indiana borrower Frank Garrison sued to block the President's student loan forgiveness. Garrison is represented by the Pacific Legal Foundation, which called the Administration's action "flagrantly illegal," saying the Administration relied on an inapplicable law intended to allow the government to modify student loans during war or national emergency.

Another feature of Biden's debt forgiveness plan further reveals the Administration's conspiracy to addict the most vulnerable to government aid: the income-driven repayment (IDR) program.

Under Biden's IDR plan, forgiveness is based on post-graduate earnings. The program is designed so that those in high return programs will pay their loans almost entirely, while those who pursue less lucrative careers could get a free ride. The IDR plan would encourage more borrowing and abuse, as debt is often used for non-tuition expenses.

Analysis from Penn Wharton found that the IDR changes made by the Biden Administration would cost another $70 billion. The entire plan's cost exceeds $600 billion using their methodology.

Adam Looney at the Brookings Institution wrote, "broad debt relief policies are regressive and preserve gaps between more and less advantaged groups instead of closing them."

Of course, future taxpayers will ultimately bear the cost of the plan. The government cannot shirk the responsibility of some without consequences. The $400 billion price tag means the representative taxpayer burden is $2,500.

The Biden Administration has made two things very clear: they want more people to be dependent on the federal government, and they will pursue reckless policies to win votes.