Be careful at the Beaufort County Republican Headquarters 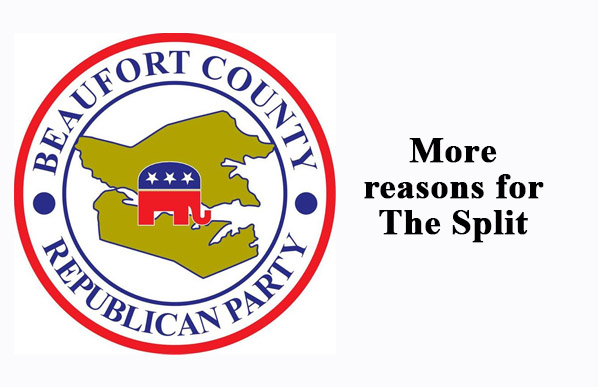 Normally one would think a political party that opened a headquarters during the campaign season would endeavor to provide wholesome assistance to all Republican voters.  That is, handing out signs, providing campaign brochures, promoting the various fund raisers, assembling mailers and otherwise presenting a wholesome appearance to the public.  A lot of these things do happen at the Republican headquarters on Minute Man Lane in the Pamlico Plaza Shopping Center.  There are other more sinister things going on also.

The most recent incident was last week.  I got calls complaining about the cancelling of the showing of the film titled “My Son Hunter”.  The showing of the film with the date and the location was presented by Chairman Garris to the Beaufort County Republican Executive Committee.  There were no objections.  Some advertising was done. People showed up to see the film and were told it had been cancelled.   No particular reason was given.  With a little digging we discovered the Chairman, Carolyn Garris suddenly decided to cancel the film because she wanted to use the headquarters to assemble a mailer for a candidate.   Chairman Garris had no authority to do this because the Executive Committee had given a consensus approval.  This is another insult and black eye handed to the Executive Committee and Republicans.  Garris thinks she has been anointed, not elected.  This damages the reputation of all Republicans. It is impolite insensitive and rude.

Another insult was handed to those who did show up.  They were told to sign in by Jody Forrest.  All of those who thought they were signing in were actually signing a petition to change the way we elect commissioners in Beaufort County.  Several were told they had no choice but to sign.  Some people realized what was happening and refused to sign.

We realize that the limited voting system is not popular in some places because the voter has only one vote each election (every two years).  However, the proposed system being pushed by Chairman Garris and Jody Forrest only allows one vote for a commissioner every four years. This is a scheme by a few Republicans who are clueless about the welfare of the public.  Any change in the way we elect commissioners will require the participation of a variety of interests including the Democrats, the commissioners and the federal courts.

Chairman Garris and a few other Republicans believe they have been elected dictators.  They are trying to seize power.

There have been complaints that Jody Forrest and Paul Varcoe, along with Garris, are steering the uninformed voters to vote for their darling Fake Frankie Waters for commissioner.  They slyly tell people that Stan Deatherage, Tandy Dunn and Hood Richardson are liberal   RINOs.

The headquarters is pushing liberal Republican Frankie Waters over conservatives Stan Deatherage and Tandy Dunn.  Waters, during a forum at the Community College, stated that he was not conservative and did not want any help from conservatives.  He went on to say he did not care about anyone but his son’s grandchildren.  Waters and his team of Democrats (Langley and Booth) and the RINO (Rebholz) raised spending more than 10 million dollars in Beaufort County this year.  That is a 16 percent spending increase.

Be careful around the Republican Headquarters.