With election upon us, the constant stream of campaign ads that most of us cannot seem to get away from has only steadily increased. While it is easy to tune these ads out, a judicial endorsement ad from Cheri Beasley caught my attention. The former supreme court chief justice has several current and prior judges coming out to endorse her for U.S. senate. The most notable of those is former Republican turned independent judge Bob Orr. Orr recently served as one of three special masters in a recent controversial court redraw of North Carolina's Congressional maps.

While Orr served on the North Carolina Supreme Court in years past, he is now better known for his recent activism in state politics and his moniker as the 'independent of the three special masters' who drew our current congressional map. Orr is registered as an independent, but he clearly has a party preference. He donated solely to Democrats in federal elections in 2022 and endorsed Democratic candidates Cheri Beasley & congressional district 13 candidate Wiley Nickel (D) in the two closest federal elections in North Carolina. However, his support of a candidate running in a district he helped draw is a concern.

The façade Orr has created as being even-handed and independent falls apart with even the slightest bit of examination into his endorsement and candidate preferences. Orr has also been a financial backer of Jeff Jackson, the former U.S. Senate Candidate in the Democratic primary. Jackson coincidentally found himself in a democratic-leaning congressional district that seems almost hand-crafted for him once he dropped out of the senate race.

Orr's endorsement of Nickel in North Carolina's most contested congressional seat and the timing of Jeff Jackson's being granted the almost ideal district calls into question if Orr put his weight on the scales for his preferred candidates or party when drawing the maps. The maps have been questionable in their design. Orr and the other special masters created seven Republican seats, six Democratic seats, and one toss-up seat. This is something that even the plaintiff's witnesses in the redistricting case Orr was involved in said was statistically unlikely, showing Republicans who likely receive nine or eight seats favoring them under politically neutral criteria. The likelihood of Republicans having an advantage in seven congressional districts or less happened only 5.3% of the time (see Figure 1).

Figure 1: Likelihood of North Carolina congressional map outcomes by Dr. Jowei Chen. The chart is on page 33 of Chen's report. 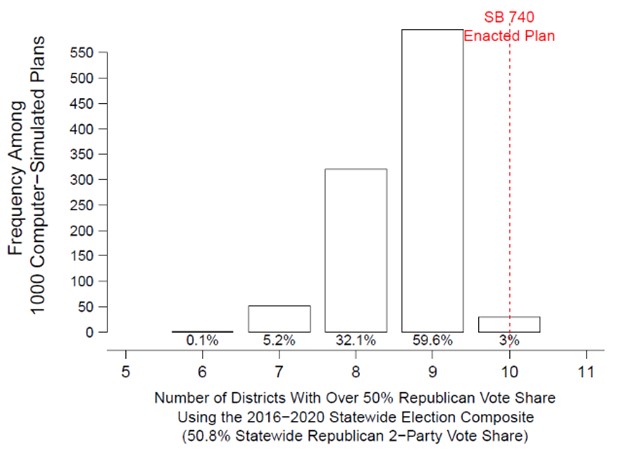 Orr has been heavily involved in shaping this year's congressional elections. Both as a court-appointed judge in the redrawing of congressional districts and as a public figure endorsing candidates in key elections. He all but disavowed Republicans when he left the Republican Party in 2021. His throwing endorsement and money behind candidates running in districts he drew calls into question his neutrality when designing those districts.
Go Back