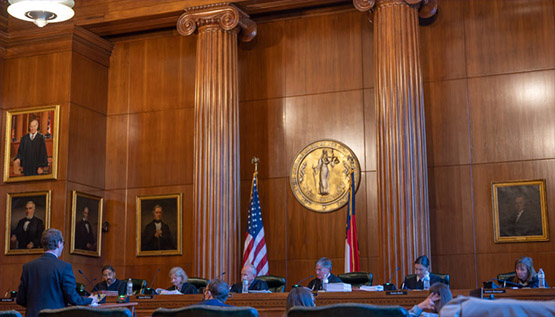 Just The News is reporting:

A state Senate map will return to trial judges to craft new boundaries for 2024 after Democrats on the state Supreme Court out voted their Republican colleagues to rule the map unconstitutional.

"The trial court erred in its determination that Legislative Defendants’ Remedial Senate Plan met constitutional standards. Specifically, the trial court’s legal conclusion that RSP is constitutionally compliant is unsupported by findings of fact that are supported by competent evidence," Associate Justice Robin Hudson wrote in the majority opinion released Friday.

"Rather, the evidence strongly indicates that the RSP creates stark partisan asymmetry in violation of the fundamental right to vote on equal terms."

The ruling stems from advocacy groups who challenged prior rulings that upheld revised state Senate and House districts approved by the General Assembly for the 2022 election. The groups alleged the revised maps continued to discriminate against black voters.

The decision affirmed the state House boundaries meet standards set by the state Supreme Court, but justices sent the Senate map back to trial judges to modify district boundaries for the upper chamber for 2024 "only to the extent necessary to achieve constitutional compliance."

"If our state is to realize its foundational ideas of equality and popular sovereignty, it must first ‘ensure that the channeling of "political power" from the people to their representatives in government through elections, the central democratic process envisioned by our constitutional system, is done on equal terms," Hudson wrote.

"Only then will ours truly be ‘a "government of right" that "originates from the people" and speaks with their voice.’"

The Friday ruling also rejected a request by Republican leaders to strike down a congressional redistricting map currently at the center of the U.S. Supreme Court case Moore v. Harper.

"Ultimately, a redistricting plan must comply with the broader constitutional standard of upholding the right to vote on equal terms and to substantially equal voting power," the opinion read. "Here, the trial court properly determined that Legislative Defendants’ Remedial Congressional Plan fell short of that standard."

Republican Chief Justice Paul Newby penned a dissent that chided the majority for commandeering a redistricting process that’s entrusted to the General Assembly.