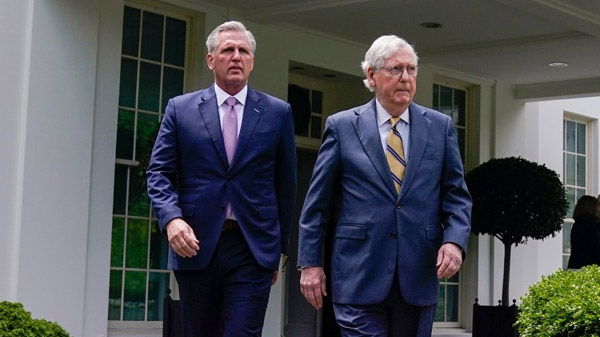 Another example of why we need a Convention of States to overturn what these crooked politicians are doing.

Twenty-one Republican senators voted with Democrats to advance a massive omnibus spending bill without reading a single page of the 4,000+ page legislation.

American taxpayers will be forced to cover the $1.7 trillion spending bill that includes billions of dollars in money for Ukraine and millions of dollars to build a walking trail named after Michelle Obama in Georgia.

Sen. Rand Paul condemned his fellow Republicans and their betrayal of voters.

“This process stinks. It’s an abomination. It’s a no good rotten way to run government. We’re standing up and saying NO,” Paul said.

McConnell’s plan was for the Establishment to sabotage both the Senate and the House during the midterm elections. When his efforts in the House failed, he colluded with Dems to strip his own party’s power in the House. This was about destroying the America First movement.

Thirteen House Republicans fired off a letter threatening to stop any legislation proposed by Senate Republicans who vote for the spending bill.

“Further, we are obliged to inform you that if any omnibus passes in the remaining days of this Congress, we will oppose and whip opposition to any legislative priority of those senators who vote for this bill – including the Republican leader,” the letter said. “We will oppose any rule, any consent request, suspension voice vote, or roll call vote of any such Senate bill, and will otherwise do everything in our power to thwart even the smallest legislative and policy efforts of those senators.”

Conservatives warned that Senate Republicans risk splitting the party in half.

“Put aside the absurd spending and empowerment of Biden bureaucrats to continue their intentional abuse of power and dereliction of duty. It is the willingness of Senate Republicans to abandon for now the one leverage point we have – the power of the purse – to stop Biden’s purposeful refusal to secure and defend our borders that is most offensive,” said the letter sent Monday.

House Minority Leader Kevin McCarthy, who is campaigning to be the next Speaker, vowed to honor that threat.

“When I’m Speaker, their bills will be dead on arrival in the House if this nearly $2T monstrosity is allowed to move forward over our objections and the will of the American people,” he said.