I'm in the Christmas Spirit: Louis Armstrong Sings Two of the Best 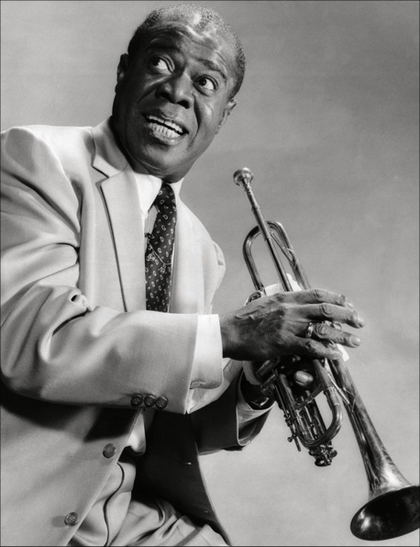 Louis "Satchmo" Armstrong
Even though Louis Armstrong did sing some Christmas tunes, like "Zat You Santa Claus?"; however, I could not find any Christmas videos of a fine enough quality to display in BCN. What I did find was a decent quality video of "Satchmo" singing live "What a Wonderful World", with the Armstrong version one of my favorite ten ballads ever written, performed by anyone, anywhere, and since the song is brimming with the optimism of a new, sacred, divine birth, which is the hallmark of Christmas, I naturally include it in my Christmas spirit series here.

Since no other decent quality Christmas Carols could be found, I chose another video, sung by Louis Armstrong, but more of an audio representation of the Louis Armstrong's classic "Moon River", written by Henry Mancini and Johnny Mercer ... one of the greatest ballads of the twentieth century. "Moon River" was specifically written for the film, Breakfast at Tiffany's, and, remarkably, was designed to accentuate iconic actress Aubrey Hepburn's slight vocal range.

"Moon River", which serves as a fine accompaniment to "What a Wonderful World?", gave a tremendous melodic boost to the 1961 romantic farce, and the song, like actress Hepburn, makes the film memorable, and an iconic classic from that simpler time.


Here below is the great "Satchmo" warbling, as only he can, of the Bob Thiele, George David Weiss classic, "What a wonderful world?": Below.


And now the classic Moon River (Due to the original video being removed due to copyright properties, I will post just the audio): Below.


And since we lost the performance of Louis Armstrong's rendition, I have included this performance by Elton John, which is a fine renditionsung well: Below.