Cleaner By Nature | Beaufort County Now | Three areas designed to hold stormwater runoff back from Greens Mill Run on the campus of East Carolina University are helping improve the water quality in the urban waterway.


Named for the 19th-century mill it powered, Greens Mill Run begins near Allen Road and meanders through Greenville before emptying into the Tar River near Hastings Ford.

Its watershed has two sections. The eastern half has been developed and contains little opportunity for treatment other than retrofitting to treat stormwater runoff from existing development, which is costly. The western half is urbanizing with networks of unbuffered ditches and channels.

The stream is classified as "impaired," with severe erosion and has frequent and rapid changes in stream flow.

Here are facts about the Greens Mill Run watershed:

Called bioretention cells, they are areas crews have excavated, rebuilt and planted with native plants to help hold runoff water, filter it and then let it soak into the soil or flow to the stream with fewer toxins.

"A lot of development at ECU began before we better understood how to manage stormwater," said Eban Bean, an assistant professor of engineering and member of the Institute for Coastal Science and Policy at ECU. "The idea was to get it offsite as quickly as possible.

That meant petroleum products, minerals such as lead, zinc and cadmium, sediment, nutrients and other pollutants went to ditches and streams that flowed to the Tar River. Now, thanks to a $100,000 grant from Sound Rivers (formerly the Pamlico-Tar River Foundation) and the N.C. Department of Justice, ECU has retrofitted three areas with bioretention cells and a stormwater wetland during the past six months.

According to Bean and co-investigators Michael O'Driscoll of the Department of Geological Sciences and Charlie Humphrey of the College of Health and Human Performance, preliminary results show the project is reducing runoff volumes and pollutants entering Greens Mill Run and the Tar River.

Capturing, treating and filtrating stormwater into the soil reduces the impact of campus on local waterways. Toward that end, Bean began working with ECU grounds staff in March to install the three bioretention cells, or rain gardens, and converted a dry retention basin to a stormwater wetland.

The bioretention cells are within a parking island in front of the Student Recreation Center, on the east side of Umstead Residence Hall and behind the Carol Belk Building on Charles Boulevard.

ECU's grounds department and a contractor excavated and graded the areas — which used to be relatively flat and covered in turfgrass — and layered sand, mixed media, silt and clay as a base to manage water filtration. Perforated pipe was also installed to move the water once it drains through the media. Topsoil went on the surface, and bermudagrass and native plants selected for their ability to hold soil and filter water were added. 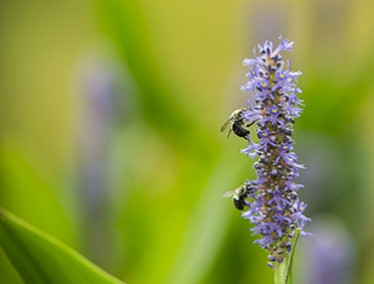 Plants in the bioretention cells and wetland include (scientific name, common name):

The stormwater wetland is at the back of the park-and-ride parking lot across from the Belk Building. Unlike the image of sandy soils in eastern North Carolina, the wetland area was heavy clay, so the water that collected in the dry basin tended to run off before it had a chance to infiltrate the ground.

Among the wetland's plants is pickerelweed, which has been showing off its purple blooms since the summer. Altogether, students, faculty and staff planted approximately 1,000 plants there.

"One concern we had initially was mosquitoes due to the standing water," Bean said. "However, we planted tall plants to attract dragonflies, which are a natural predator to mosquitoes."

In addition to plenty of dragonflies, many frogs have moved into the wetland, and they also prey on mosquitoes. Stephanie Richards, who studies vector diseases in the ECU Department of Health Education, put traps out and found very few mosquitoes in the wetland and plans to use the site for her classes. The peninsula extending into the wetland was designed to separate inflow and outflow and serves as a gathering spot for discussions and teaching.

"It's good for our students to see...ECU be an example of what we should be doing with our stormwater management," Bean said. 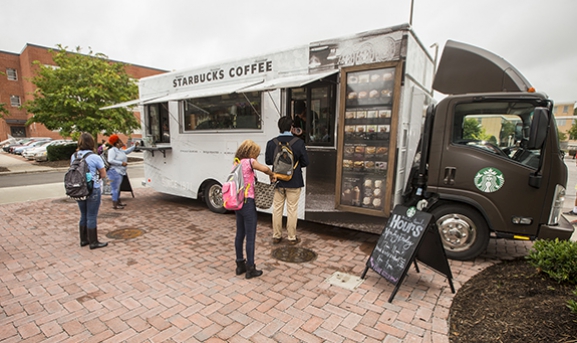 The Starbucks mobile unit at ECU is shown on the permeable parking pad created to reduce stormwater runoff.
Starbucks wanted to bring a mobile unit on campus to satisfy campus coffee desires. But there wasn't an ideal place to park it.

So ECU's grounds department went to work. The result is an 850-square-foot permeable parking pad that not only supports the truck but also reduces stormwater runoff.

"The conventional approach would have been to install concrete or asphalt to support the load of the trailer, which also would have increased stormwater runoff," said John Gill, director of the grounds department.

Instead, his department, with the assistance of Eban Bean of the College of Engineering and Technology, designed the permeable paver plaza.

"This pavement allows rain and runoff for most storms to rapidly infiltrate through the pavers and collect within a storage layer just below the surface, where it can naturally soak into the ground," Gill said.

In addition, this novel design uses wood chips mixed in with the stone subgrade to improve water quality by removing nitrogen. This step is important since all of ECU's Main Campus eventually drains to the Tar River, where nutrient concentrations, especially nitrogen, impair water quality.

A monitoring well was also installed allowing students in engineering, geological sciences and other departments to study the parking surface's effectiveness in reducing runoff and improving water quality.

In 2012, the grounds department installed a similar permeable parking surface across 14th Street from the Gateway East and West residence halls. 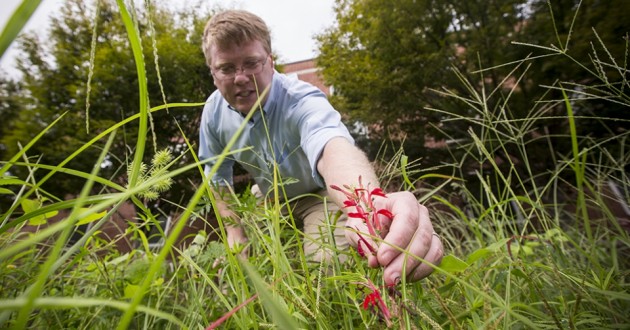