An international security expert, Bergen presented "Making Sense in a World of Trouble" in Wright Auditorium Sept. 29, as the premier lecture for the 2015-16 Thomas Harriot College of Arts and Sciences Voyages of Discovery Lecture Series.

The world is witnessing its first "social media war," Bergen said. The Islamic State, or ISIS, has drawn more than 8 million people to its cause through social media, he said, with more than 46,000 ISIS-associated Twitter accounts and English language web sites that promote the group and provide step-by-step instructions on how to join.

ISIS has recruited more than 30,000 followers in the past two years, with thousands more joining each month, he said.

ECU students enjoy a casual conversation with journalist Peter Bergen.
Bergen explained that ISIS developed out of the United States' invasion of Iraq in 2003, which was intended to dismantle Al-Qaida.

By 2008, Al-Qaida was basically non-existent, he said, but in 2011 the remnants of that group restructured themselves in Syria into what is now known as ISIS.

He said that ISIS uses social media to convey a three-part message: They are winning. They are creating an "Islamic utopia" on Earth. They are inviting women to join and marry "heroic, Islamic fighters."

"ISIS thinks they are ushering in the end of times," he said. "They are also trying to promote it as Jihadi cool."

Efforts have begun to reign in the group's use of social media, Bergen said. Facebook and Twitter are removing posts that promote violence. Former ISIS members are speaking out, indicating that ISIS is not the utopia it claims to be. Opposition groups have been formed. Muslim clerics are working to persuade young people not to join.

Despite the growth of ISIS, Bergen said the world is safer now than before the terror attacks of 9/11, thanks to improved no-fly lists and terror watch lists, enhanced communication between the CIA and FBI, a new Department of Homeland Security and 2,000 new FBI agents assigned to counter terrorism after 9/11.

United States offensive measures such as the invasion of Afghanistan, drone strikes and the assassination of Osama bin Laden have played a strong role as well. People are also more observant, he added. Reports from citizens have prevented two separate attempts to detonate bombs on U.S. airlines, along with an attempt to explode bombs in an SUV parked in Times Square.

As a result, he said terrorism problems are largely managed. "The attack of 9/11 was a surprise, but we have created defensive measures which make it harder for people to come into the U.S. to attack us," he said.

Bergen is a print and television journalist and author; the director of the national security studies program at the New America Foundation in Washington D.C.; a fellow at Fordham University's Center on National Security and CNN's national security analyst. He has held teaching positions at the Kennedy School of Government, Harvard University and at the School of Advanced International Studies at Johns Hopkins University.

His presentation marked the beginning of the Voyages series' ninth year. More than 22,000 have attended the lectures, which have brought 36 speakers to campus.

Speaking about the series, Provost Ron Mitchelson said, "It has educated, inspired and challenged us. It represents ECU's commitment to the region and people of eastern North Carolina — fulfilling our pledge; our motto to serve."

Prior to the evening presentation, Bergen met with a selected group of students including graduate students enrolled in a security studies class, honors students and representatives from the Harriot College advancement group.

For additional information about the Voyages series and upcoming speakers, visit www.ecu.edu/voyages. 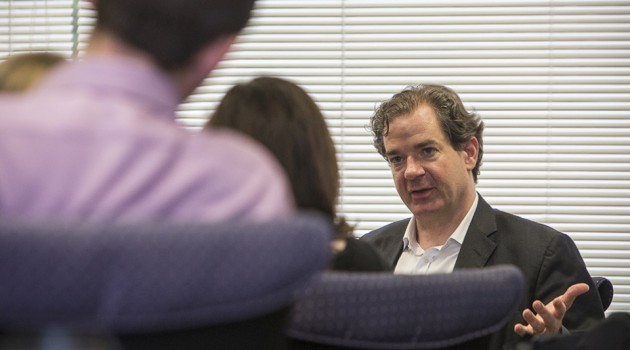 International security expert, journalist and author Peter Bergen visited ECU Sept. 29 as the premier lecturer for the annual Voyages of Discovery lecture series. Pictured above, Bergen met with selected ECU students prior to the evening presentation. (Photos by Cliff Hollis)
Go Back