Whitney selected as Chairman of the State Board of Elections

RALEIGH, N.C.     A. Grant Whitney, Jr. was unanimously selected as Chairman and sworn in today, Friday, January 15, as the third Republican member of the bipartisan State Board of Elections. The Honorable Ann Marie Calabria administered the oath and Whitney's family was present for the ceremony. 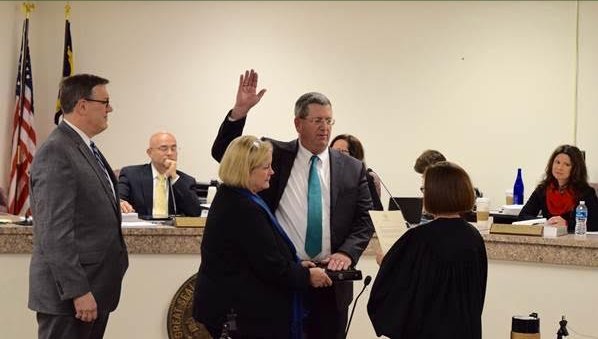 "My wife and I have lived in North Carolina all of our lives, raised and educated our two children here as well," said Chairman A. Grant Whitney, Jr. " I am delighted to have the opportunity to give back just a little of the great things that North Carolina has meant to all of us."

Gov. Pat McCrory appointed Whitney to fill the unexpired term of Josh Howard, who resigned effective Jan. 1. Whitney will serve through the remaining term which ends May 2017.

"We welcome Chairman Whitney's bipartisan leadership of our board during an important election year," said Executive Director Kim Westbrook Strach.

The Board also ordered three new elections to be held on March 15, 2016.

For additional information visit North Carolina State Board of Elections website at www.ncsbe.gov.