ECU's Coprich Gives Back To His Hometown | Beaufort County Now | East Carolina University football player and graduate student Jeffrey Coprich has turned a tragedy into a way to honor his sister while advocating a lifelong hobby - reading.

ECU's Coprich Gives Back To His Hometown


East Carolina University football player and graduate student Jeffrey Coprich has turned a tragedy into a way to honor his sister while advocating a lifelong hobby - reading.

On his third birthday, Coprich's family was involved in a car accident on the way to a family reunion. The car flipped multiple times, killing his 7-year-old sister, Essence, and 2-year-old cousin Ejuanhe Greathouse.

Growing up near Watts, California - where gang life and drugs were pervasive - presented many challenges to Coprich. "Growing up in LA made me a tough person. I was surrounded by a lot of gang activity and violence, and it makes you a different person," Coprich said.

His sister's death was not the only one. "A lot of family and friends have lost their lives to gang activities. But I am thankful for where I grew up because it made me the person I am today - a mentally tough and strong individual," said Coprich. 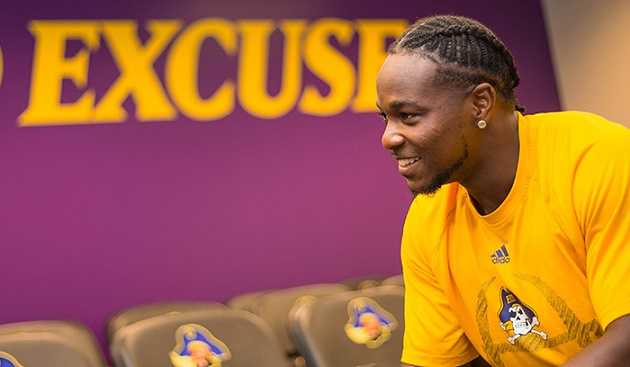 Encouraged by his father, Jeffrey Coprich Sr., Coprich never lost sight of his ultimate goal of going to college. "I always knew that education was the way out," he said.

Coprich graduated from the University of California-Berkley with a degree in legal studies and came to ECU as a graduate transfer after being granted an additional year of eligibility from the NCAA. ECU Defensive Coordinator Kenwick Thompson previously worked as a linebacker's coach and recruiting coordinator at UC-Berkley and kept in touch with Coprich.

"Growing up, I struggled with reading. It wasn't until third or fourth grade that I realized that I was behind. The libraries didn't always have books that kids found interesting, so they didn't want to read. I wanted to make sure that these kids had access to materials that were engaging and fun," said Coprich.

That's where Coprich got the idea for helping inner city youth while honoring his sister's memory by upgrading the local school library and starting a book club.

After the accident, the 116th Street Elementary Library in Watts was renamed for Essence, who had attended the school and was well liked by students and teachers.

The library was in need of renovations and repairs so Coprich worked with Congresswoman Maxine Waters, the I AM Foundation, Microsoft and the Los Angeles Unified School District to obtain a grant to purchase new materials for the library, including books, computers and tablets.

The book club holds monthly meetings, and students read a new book each month and write a short report to be presented to other members.

Recently, Coprich was recognized by the American Football Coaches Association and was named to the Good Works Team, which honors collegiate football players who are engaged and give back to their communities.

Coprich and his father have also created the Unsung Heroes Award to recognize high school athletes and community activists around LA that may not receive recognition elsewhere. The awards are in their fourth year, and they continue to grow each season.

While new to ECU, Coprich said that he loves the Pirate Nation. He will play as a running back on the football team and is obtaining his master's degree in communication.

"It's like one big family here, and that's really important for a school and a team," said Coprich.

Although he is on the opposite side of the U.S., Coprich plans to stay involved with the library and the book club.