Published: Tuesday, February 14th, 2017 @ 7:31 am
By: John Locke Foundation   ( More Entries )
Publisher's note: The author of this post is John Trump, who is managing editor for the Carolina Journal, John Hood Publisher.

Lawyers for NCGA say confirmation process enhances transparency; Cooper's team instead refers to it as 'tyranny'

That same panel - Superior Court Judges Jesse Caldwell III, Todd Burke, and Jeffrey Foster - on Tuesday issued a temporary restraining order in favor of Cooper, who has filed a lawsuit citing constitutional issues in the confirmation process, the root of which came with a measure, House Bill 17, passed by the General Assembly in December.

The injunction would effectively extend the TRO until the lawsuit goes to trial in March.

The hearing in the Wake County Courthouse on Friday lasted more than 2 1/2 hours as lawyers from both sides presented arguments that largely centered around separation of powers and the Senate's constitutional limits to advise and to consent.

Cooper, say his lawyers, believes the Senate confirmation process as defined in House Bill 17, particularly Part III, Section 38, violates the separation-of-powers clause and, as a consequence, inserts the Senate into a core function of the executive.

Attorney Noah Huffstetler III, representing Berger and Moore, said the confirmation as stated in the law is simple, straightforward, and transparent, all the while displaying the virtue of efficiency.

Cooper's team argued the Senate is simply failing to follow the law. 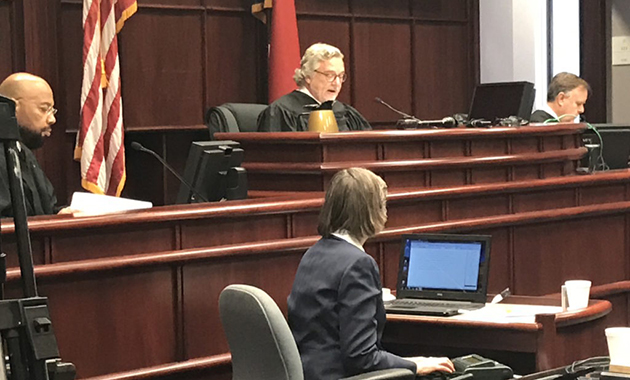 
Attorney Jim Phillips, representing the governor, said Cooper's claims stand on their merits and referred to the case as an example of legislative overreach. He said the Senate is treating the separation-of-powers clause as the proverbial "bump in the road" and that the legislative interpretation of "advise and consent" interferes with a core function of the governor in appointing his Cabinet, whose members will set the course for the state and uphold the law. The Senate process, as written in the law, causes irreparable in a number of ways, not the least of which involves a failure to follow statutes and the state constitution.

Cooper, Huffstetler and his team argued, can't possibly show irreparable harm unless and until a nominee comes before the Senate and is disapproved.

The Senate, despite Cooper's legal maneuvers, have nevertheless tried to proceed with the confirmation process

Committee Co-Chairman Wesley Meredith, R-Cumberland, said the confirmation hearing would be reset, pledging, "we are going to get answers to questions regarding their qualifications, potential conflicts of interest and willingness to obey the law."

The judges Friday directed pointed questions at both sides. A list of questions for nominees, though legitimate and germane, said Caldwell, could prove cumbersome and inherently time-consuming. If the legislature thought the executive branch was out of control, Burke asked, then why hasn't already been proposed and passed. Why is it now so compelling?

The defendants' team called the confirmation process a positive thing for North Carolina, as that relates to open government and a strong system of checks and balances. It's good, sound public policy and is probably overdue, they said.

To a judge's question, Cooper's team responded that the separation-of-powers clause is a protection for the people against tyranny.

In a news release, Berger's office shot back.