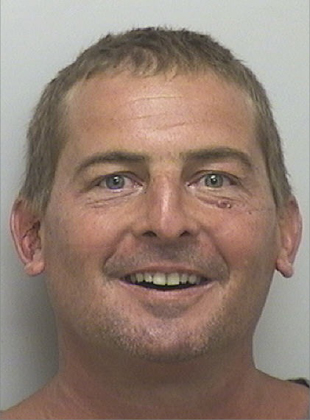 Blythe Hilton Noe III
approximately 5:00 p.m., Deputy Zach Martin responded to the area of Country Club Estates off River Road in Washington in reference to a report of a careless and reckless driver that may be impaired. While patrolling the area of Wedgewood Drive, a white male walked up to Deputy Martin’s patrol car and began yelling and cursing. Deputy backed away from the subject to create distance and called for back-up. The intoxicated subject then grabbed the patrol car and shook it violently.

Deputy Martin exited the vehicle and began giving the subject verbal commands. The subject refused to comply and threatened to kill Martin. While Martin awaited back-up, family and neighbors of the subject attempted to calm the subject down. When additional units arrived, the subject had entered the woods behind a home on Wedgewood Drive. Deputies and Troopers from the NCSHP located the subject in the woods and took him into custody after a short struggle.

As Deputies attempted to walk the subject to his residence to be placed into a patrol car, the subject spit in a Deputy’s face, kicked a Deputy, and continued to resist. As a result, Blythe Hilton Noe III, age 41, of South Wedgewood Drive in Washington was charged with Malicious Conduct by a Prisoner; Assault on a Government Official; Resist, Delay, Obstruct an Officer; Communicating Threats; Disorderly Conduct; and Intoxicated and Disruptive. Noe was transported to the Magistrate’s Office and held in the Beaufort County Detention Center on a $6,000.00 secured bond.