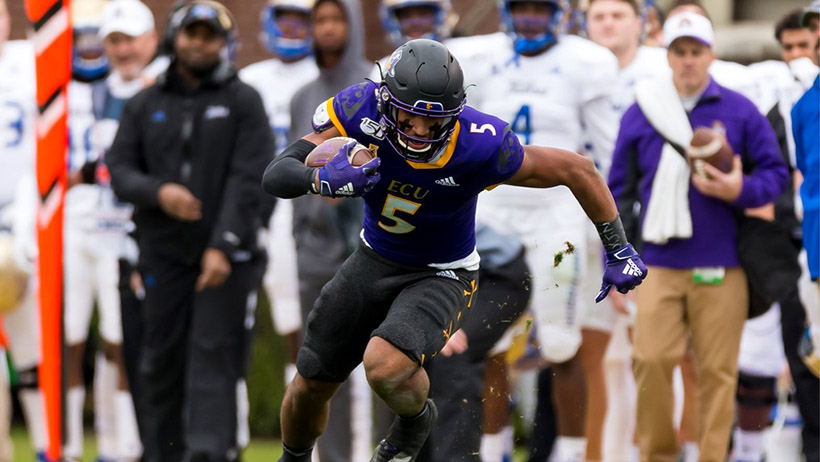 NEW ORLEANS, La.     East Carolina wide receiver C.J. Johnson has been named to the 2019 Football Writers Association of America-Shaun Alexander Freshman All-America Team presented by Stand Together according to an announcement by the organization Monday.

Johnson is the first Pirate offensive player in program history to earn a place on a postseason national rookie squad and eighth overall, most recently following linebacker Jeremy Grove's FWAA selection in 2011.

The Greenville, N.C. native set an ECU freshman record with a team-leading 908 reception yards, while also topping the unit with a 16.8 yards-per-catch average, a 75.7 yards-per-game clip and four 100-yard receiving outings. His reception (54) and touchdown catch (four) totals stood second among all Pirate receivers.

Johnson, who opened six of 12 contests during his initial campaign, also established an East Carolina and American Athletic Conference single-game reception yards standard with 283 (career-best 12 catches) against Cincinnati on Nov. 2, which ranks as the highest individual single-game output at the FBS level in 2019. His other triple-digit performances included a 141-yard effort versus Tulsa, 106 at UCF and 100 against Temple.

Among AAC members, Johnson was the only offensive playmaker chosen and joins Cincinnati defender Ahmad Gardner (CB) and Memphis specialist Kenneth Gainwell (AP) on the squad. He is also one of three selections from the state of North Carolina along with UNC quarterback Sam Howell and NC State offensive lineman Ikem Ekwonn.

The 13-person panel of nationally-prominent college football experts represented each of the FBS conferences along with independents in the selecting the team. Both true freshmen (20 players) and redshirt freshmen (12 players) were considered for the team.

Founded in 1941, the Football Writers Association of America consists of 1,400 men and women who cover college football. The membership includes journalists, broadcasters and publicists, as well as key executives in all the areas that involve the game. The FWAA works to govern areas that include game-day operations, major awards and its annual All-America team.
Go Back