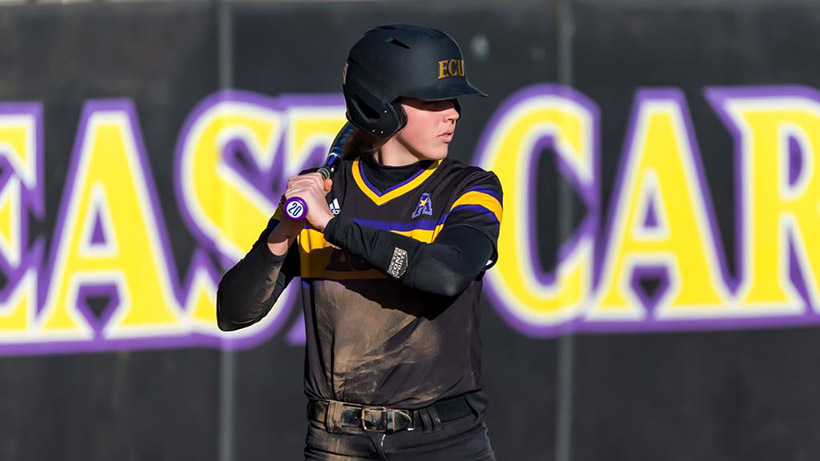 FRESNO, Calif.     East Carolina ended its weekend at the Fresno State Bulldog Classic on a high note Sunday morning, building a 5-0 cushion on the way to an 8-6 victory over 10-time and defending Summit League champion North Dakota State at the Margie Wright Diamond.

The Pirates improved to 14-9 overall with their third-straight victory in advance of a nine-game homestand that begins next weekend. ECU also hit an astounding .356 during the tournament with 38 runs scored on 53 hits, 10 doubles, two triples and five home runs.

Junior infielders Ashleigh Inae and Chandley Garner, as well as senior catcher Abigail Umphlett, collected a pair of hits apiece while Umphlett notched her first triple of the campaign. Garner also chipped in with a run scored and three RBI while freshman RHP Logyn Estes drove in what turned out to be the winning two runs in the sixth inning with a double. Lauren Reimers had a nice day for the Bison, going 3-for-4 with two runs scored and two RBI. East Carolina out-hit NDSU (7-16) by a 12-10 margin while the Bison committed three errors to the Pirates' two.

Not only did Estes (8-2) get it done at the plate, but she also picked up her eighth win of the season against two losses in the circle, hurling the final four frames. She allowed just one earned run while scattering four hits and posting one strikeout against no walks. Paige Vargas (4-9) was saddled with the loss. She lasted just 1.1 innings while surrendering five runs (three earned) on five hits with a walk and a strikeout.

Senior outfielder Olivia Narron reached second on a throwing error to lead off the contest before Inae hit a flare single into left field to give ECU runners on the corners with no outs. Following a strikeout, Garner pounded a double into the right center gap to score both runners and put the Pirates on top, 2-0.

East Carolina kept the pressure on in the top of the second, plating three runs on three hits and a couple of North Dakota State errors. Umphlett led off with a triple that eluded the glove of the right fielder before freshman outfielder Sydney Yoder walked and Narron reached on an infield single to load the bases with no outs on the board. An errant throw home on a force out attempt allowed Umphlett to score before redshirt senior utility Rachel McCollum hit a sacrifice fly to right and Garner bounced an RBI single off the third base bag to leave the Pirates ahead 5-0.

The Bison broke onto the scoreboard in the bottom of the second as three consecutive singles to start the frame led to their first run of the contest. A groundout resulted in another tally before junior RHP Kama Woodall induced a grounder to second to shut the inning down.

North Dakota State drew closer in the bottom of the third. After a groundout, two-straight singles put the Bison in business. Woodall notched a strikeout for the second out, but Reimers laced a double to left field to score two and make it a one-run contest at 5-4.

ECU quelled the NDSU momentum in the top of the fourth as Inae singled up the middle to lead it off before redshirt senior infielder Tate McClellan laced a double to the right field wall to plate her and push the Pirates back ahead by two.

After taking the circle to begin the fourth, Estes helped herself in the top of the sixth by lining a two-run double into the left center gap to propel East Carolina to an 8-4 cushion. The Bison answered in the bottom of the inning, scoring on an error and a flare single to center field that sliced the Pirate lead to a deuce. North Dakota State put a runner on with two outs in the bottom of the seventh, but Estes froze Reimers looking to end the contest.

The Pirates return to action March 13-15 when they welcome Sacred Heart, La Salle and Rutgers to the ECU Softball Stadium for the Purple-Gold Invitational.