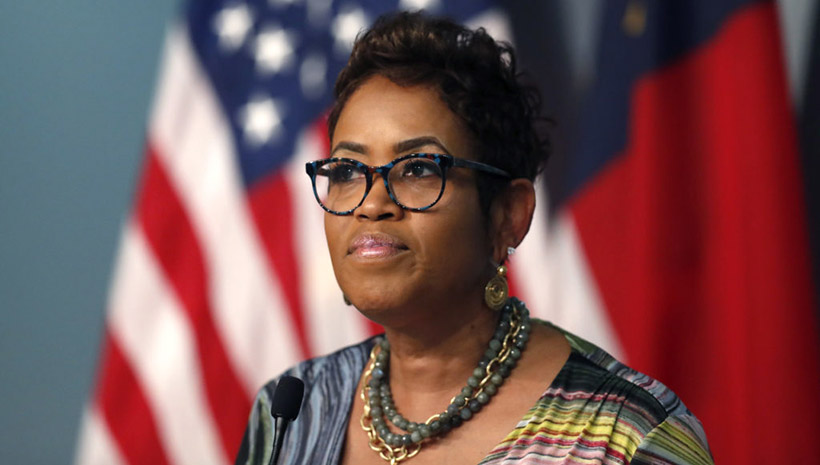 Machelle Sanders, secretary of the North Carolina Department of Administration, speaks during a briefing at the Emergency Operations Center in Raleigh, June 4, 2020. | Photo: Carolina Journal

Problems with policing and race relations must be dealt with, North Carolina's leading politicians say. But meeting to talk about the issues doesn't guarantee change, experts say.

Many North Carolinians are asking lawmakers to do something, as the country continues to face civil unrest after the death of George Floyd, as well as COVID-19.

Instead of calling for legislation after the protests and riots, the governor and lawmakers responded as they often do: by creating task forces.

Cooper created the Andrea Harris Social, Economic, Environmental, and Health Equity Task Force to identify and fix inequities in health care, environmental justice, and the economy. He directed the Pandemic Recovery Office to distribute money fairly to all businesses in need, including those owned by minorities.

Machelle Sanders, secretary of the Department of Administration, will head the group. No one has been named to the task force so far, but Cooper said membership will represent all demographics.

"It permits him, as he did today during his pre-screened press conference, to avoid taking positions on any politically challenging issues, instead passing off responsibility to his new task force," Senate Republicans said.

Moore's commission, the Task Force on Justice, Law Enforcement, and Community Relations, was announced about an hour before Cooper's Andrea Harris task force. The group will include lawmakers, law enforcers, clergymen, and civil rights leaders. It will look at data and research to advise legislation, Moore told Carolina Journal.

What's the goal? CJ asked Moore. What specific changes do you hope to make?

"I don't have any predetermined or preconceived outcome," Moore told CJ.

The simple goal is getting people from all backgrounds to sit at a table and hash out ideas, opinions, and solutions, Moore said.

"I don't in a million years think a group of lawmakers are going to be able to meet and fix the problems of racism," Moore said. "But I think we can make steps in that direction. I think we can see the determinations."

Task forces are a mixed bag in North Carolina — as they are in many other states, said Chris Cooper, a political scientist at Western Carolina University.

"At their worst, they are a way for politicians to claim to voters that they are paying attention to an issue, without actually following through," Cooper said. "At times, however, they can provide the time and resources for a group to gather opinions and evidence and find better policy solutions than they would have otherwise."

A good example is the N.C. State Constitution Study Commission in 1968, led by former Gov. Dan Moore. That group paved the way for the state's third constitution, Cooper said.

Another example is the N.C. Commission on Administrative Law and Justice, headed by former N.C. Chief Justice Mark Martin. Some of its findings were used to back North Carolina's milestone "Raise the Age" legislation in 2017.

North Carolina has seen countless task forces over decades, Chris Cooper said, many influential. Those study commissions include one on migrant labor in 1982, one on mental health in 1988, one on electricity deregulation in 1997, and one on higher education in 1993.

Most recently, the House Select Committee on COVID-19 successfully met and negotiated a relief package, which passed the General Assembly unanimously. That effort is evidence task forces work when it comes to forming consensus legislation, Moore told CJ.

"Governor Cooper's task force on racial inequities is necessary, but may produce recommendations that would be difficult to pass in a time of divided government," McLennan said.

Indeed, study groups offer policymakers an opportunity to deal with issues in greater depth and detail than the normal public policy process, said Mitch Kokai, senior political analyst at the John Locke Foundation. But there's no evidence a task force will be more effective than a typical legislative debate, Kokai said.

"It's hard to point to a particular task force in the recent past and say that it made the difference between a good idea getting passed or falling by the wayside," Kokai said.

Legislative task forces — like Moore's — are more likely to make policy changes, Chris Cooper said, since they are "connected to policymakers who have the ability and the incentive to pursue their recommendations."

Still, without accountability, the work of any task force can be pushed aside and forgotten. The topic of a study, too, can affect whether the legislature or governor adopts recommendations, McLennan said.

"It's more difficult for politicians to dodge recommendations if the people know about it," he said.

The governor's task force is set to meet at least twice monthly during the statewide emergency over COVID-19. Its first report to Cooper is due Dec. 1 — after the fall election, perhaps as Cooper's term is ending.

Moore's group will convene at the end of the legislature's 2020 short session, but there's no deadline or timeframe, the House speaker told CJ.