Rule of Law … or Mob Rule? | Eastern North Carolina Now | Mob violence seems to be the rule across the nation’s historic landmarks, indiscriminately tearing down or vandalizing everything from Gen. U.S. Grant to Cervantes to monuments to the “Greatest Generation.” 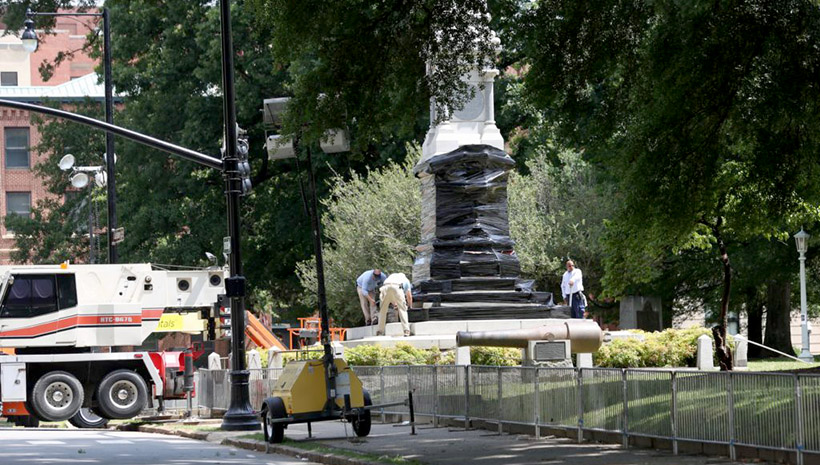 Mob violence seems to be the rule across the nation's historic landmarks, indiscriminately tearing down or vandalizing everything from Gen. U.S. Grant to Cervantes to monuments to the "Greatest Generation." This is especially true in cities and states with Democratic executive leadership, including North Carolina.

Finally, in a few places we see a glimmer of hope for the rule of law.

In Washington, D.C.'s Lafayette Square, park police were allowed to stand their ground to prevent a mob from rioting and toppling a statue of President Andrew Jackson. Regardless of what you think of North Carolina's native son and seventh president, facing down the mob is cause for celebration. Good for law enforcement for using pepper spray to do it.

In Seattle, the romance may be gone from Democrat Mayor Jenny Durkan's "summer of love," along with Durkan's rose-colored vision for "democracy" in the CHAZ turned CHOP, six blocks of mob rule within the city's Capitol Hill area. Things there turned violent over the weekend. Apparently, having no duly elected recognized rule of law leads to violence. Ceding ground to violent mobs doesn't subdue them. Instead, it emboldens them.

Who knew? The answer, of course, is just about any reasonable person.

But considering some of North Carolina's elected executive leadership, reason isn't what we have. Raleigh's Fayetteville Street is boarded up after weekends of mob rioting and looting. Uptown Charlotte has its own plywood storefronts, and a World War II Memorial was defaced with the communist hammer and sickle. Violence erupted over the weekend, leaving four dead with no witnesses, even though 400 people were present at a Juneteenth celebration.

The N.C. Capitol wasn't without violence, either, over the Juneteenth weekend. Gov. Roy Cooper's Department of Public Safety ordered the Capitol Police to stand down and let a mob have its way with part of the Capitol Historic District, tearing down Confederate statues, dragging them through the streets, and eventually hanging one from a streetlight.

Cooper then ordered the removal of other monuments and blamed the Friday night riot on the General Assembly for failing to repeal a 2015 law allowing an orderly, democratic public process for monument removal and relocation through the N.C. Historical Commission that Cooper controls. A law that his fellow party member and current Attorney General Josh Stein voted for when he was a state senator.

Between Cooper's economic shutdown and the subsequent constitutional crisis, as well as this mob violence, the governor has abandoned the rule of law and democratic processes. His senior adviser, Ken Eudy, shed some light as to why with a weekend tweet. "You know what would have avoided the dangerous incident of last night? Expanding Medicaid. Constitutionally funding public schools. Resisting voter suppression. No one died last night, but thousands have died because of NC's refusal to expand Medicaid."

Apparently, the Capitol Police were ordered to stand down and let the mob riot and destroy public property because the elected state legislature didn't roll over for the governor's progressive agenda. That isn't governing.

It's hard work to go through a democratic process such as convening the Council of State, made up of the 10 statewide elected executive branch officials, to get approval for an emergency declaration, or working with the legislature, a duly elected, co-equal branch of government.

If voters decide on government divided between two parties, well, that requires patience and usually some kind of compromise. So, a governor may not get everything he wants, but most probably doesn't cede ground to a violent mob to get it.

Eudy's own words voice what I and others have suspected. Cooper isn't looking out for North Carolina. Instead, he's looking toward November to consolidate power and advance a progressive agenda, including the budget-busting Medicaid for healthy people, curtailing educational choice, and higher taxes. He's betting public opinion will be with him when he campaigns that failure to expand Medicaid is "violence against the poor," invoking troubling images from these current riots.

Voters will have a lot of races to decide this November, but it all boils down to one choice. Will voters choose mob rule, or the rule of law?
Go Back