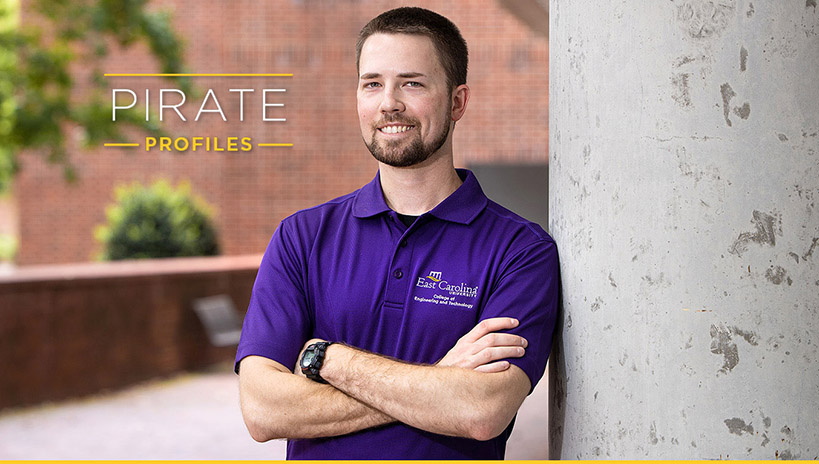 A lifelong tinkerer and Marine veteran, Spencer Lee has built everything from off-road vehicles to robots. His interest in "all things mechanical" is shaping his career as an engineer and project manager along with a major in industrial engineering technology at East Carolina University.

Lee's current project: completing his final semester in ECU's College of Engineering and Technology. He is set to graduate in December.

Lee enrolled at ECU in fall 2018 after starting at Wake Technical Community College. "I chose ECU because I heard great things about the engineering program, both from some of the professors I had at Wake Tech and a few friends," he said. "I liked the campus layout as well. Everything is less spread out as compared to some other local universities. Lastly, it was close by home so I could commute if necessary."

Lee has a degree in automotive/diesel technology from Nashville Auto-Diesel College in Nashville, Tennessee. He built off-road performance vehicles before joining the Marine Corps in 2009, which included a tour in Afghanistan.

There he worked in motor transport logistics, providing support to all ground-based units with wheeled vehicles. With his degree in automotive diesel technology, Lee headed fleet management, which post-deployment led to becoming quality control chief responsible for managing other Marines, and the equipment in his unit as well as seven other units on base.

"This led me down the path to becoming an engineer and project manager. I feel this has been a major asset toward this degree that is centered around those two concepts," Lee said. 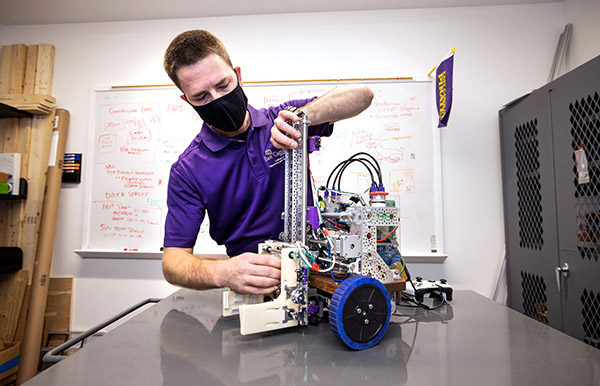 Spencer Lee works on a robot in the Science and Technology Building.
He also was exposed to a more specific field of engineering at the Florida Institute of Technology and NASA Ames Research Facility. "This is where the real interest took hold," he said.

After his military service, he began classes at Wake Tech while working in a pharmaceutical facility producing equipment for bottling, counting, packing and other functions for medications. "This led me to choose industrial engineering because I enjoyed improving on processes and product quality procedures as well as the machines themselves," Lee said.

At the community college, Lee led weekly student meetings in the engineering department, an aerial drone competition, the North Carolina Space Grant weather ballooning competition and a rover competition at NASA's Langley facility in Virginia in the summer of 2018.

"When I arrived at ECU, I immediately wanted to become involved in something beyond regular classes," said Lee, who became lead designer for ECU's chapter of the Association of Technology, Management and Applied Engineering competition robot. He worked closely with teammates in programming, fabrication and materials procurement as well as with faculty advisors. In fall 2019, the team took first place in a national robotic competition.

Earlier this year, Lee interned with NASA in video informatics, which involved identifying, cataloguing and developing a database to help store and disseminate video data. He also volunteered to help produce a 3D printed, National Institutes of Health-approved face shield for a Hampton, Virginia, medical facility. He analyzed the face shield using 3D slicing software on his personal laptop, helping find design flaws, sizing concerns and fit issues that could cause production stoppages.

"I learned a great deal of what it truly means to be an industry professional — developing the relationships, understanding the process from start to finish and seeing all the pieces in between, working with others for a common goal, and seeing the idea through to the end," said Lee, who created a checklist for the next intern, which had never been done.

Lee's dream job is to work for NASA full time. Right now, he's hoping to find a good-paying job that lasts given the current pandemic. "Adapting to changing circumstances is something I am accustomed to," he said.

What advice do you have for other students? Do any and everything you can to set yourself apart from others, but don't overdo it. Be sure to take the two to four short years you have on campus and form lasting bonds with professors and classmates alike.

What is something cool about ECU that you wish you knew during your first year? How involved everyone is, from teaching staff to the lab supervisory staff to alum, in making sure you have everything you need and their want to see you achieve.

This Pirate has a passion for all things mechanical.