Tensions Fester Between Hunters and Landowners Over Dogs | Beaufort County Now | A battle simmering between landowners and deer hunters who use dogs shows no signs of easing. Landowners believe that deer-dog hunters are infringing on their property rights because they have little recourse if hunters let dogs run loose on their land.

Tensions Fester Between Hunters and Landowners Over Dogs

Published: Friday, June 29th, 2012 @ 12:41 am
By: John Locke Foundation   ( More Entries )
Publisher's note: Signé Thomas, who brought this informative piece to us, is an editorial intern with the Carolina Journal.

Debate over whether counties or state should set policy

RALEIGH     A battle simmering between landowners and deer hunters who use dogs shows no signs of easing. Landowners believe that deer-dog hunters are infringing on their property rights because they have little recourse if hunters let dogs run loose on their land. Current state law (the Landowner Protection Act) states that in order to hunt on properly marked private property, the hunter must carry a card with the written permission of the landowner.

However, this prohibition on trespassing does not apply to the hunters' dogs.

In 2009, the Pasquotank County Board of Commissioners asked the General Assembly to outlaw all hunting on private property unless the hunters have written permission from the landowners. That resolution went nowhere, and in February 2011, the Pasquotank commissioners rescinded that request.

Elizabeth City resident Doug Lane pushed for the 2009 resolution and urged the county board to stick with its earlier decision. "North Carolina needs to have hunting rules that apply to the entire state," Lane said. "Local ordinances vary so much that it is difficult for a hunter to keep track of the laws."

Lane sees Georgia as a model for North Carolina to emulate. In 2003, 41 Georgia counties allowed hunting with dogs; six of them strongly considered banning the use of dogs. A hunter responsibility act passed that year, regulating dog hunting with a revocable permit system and revocable dog hunter license. Since the law's enactment, the six counties considering a ban have continued allowing dogs in hunting. There have been no complaints lodged at the state level by frustrated landowners, leaving some wondering if this approach would work in North Carolina. 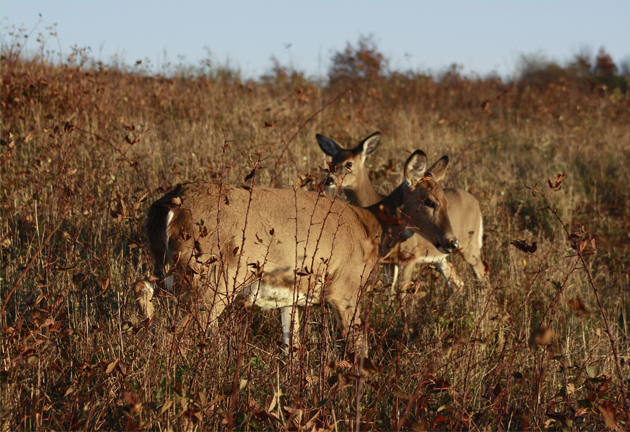 Whitetail Doe feeding on a hilltop meadow: Above.   photo by Stan Deatherage

Henri McClees, executive director of the North Carolina Sporting Dog Association, does not favor the Georgia plan. She says several differences between Georgia and North Carolina would make the plan unworkable: Georgia is more urban and has fewer areas for hunting; North Carolina has the dog-deer line in place; and this state has the Landowner Protection Act.

NCSDA also rejects the Georgia plan because the legislature "delegated all the regulations for hunting to a separate [regulatory] body," the Department of Natural Resources, McClees said. "We don't think that is a good idea." She believes that elected officials are more accountable to constituents.

David Cobb, head of the Division of Wildlife Management within the North Carolina Wildlife Resources Commission, states that while "Georgia DNR has the authority to regulate deer hunting with dogs, the Wildlife Commission does not have the authority in North Carolina, east of the 'Dog Line' that has been retained by the legislature."

In the eastern counties that allow dog-deer hunting, there are no local laws that completely ban deer hunting with dogs. "A total ban is the best solution because it is easy to enforce," Lane said, but "I do not think [a ban] is fair to those hunters that hunt responsibly. A compromise that allows them to hunt yet protects my property rights is needed statewide."

McClees says there is tension particularly in the counties where the dog-deer line falls in the middle of a county. She says that the Landowner Protection Act "was a big cooperative effort from people on both sides of the issue."

Landowners also take issue with the fact that they must post signs or paint trees on their property before the Landowner Protection Act applies.

You must "post your land with signs or with purple paint," McClees says. Some landowners complained that hunters were removing signs from trees; painting them offers a more permanent and identifiable way to designate property that is off-limits for hunting.

Lane has drafted a hunting ordinance that he would like implemented in Pasquotank County. It has several key differences from the Landowner Protection Act: It would be unlawful for a hunter to "release hunting dogs that go on the land of another" without written consent of the landowner, and it would make trespassing a Class 2 misdemeanor for both humans and dogs, punishable by imprisonment and fines. The ordinance is specified to be "complaint-driven," meaning that no arrests can be made without the consent of the landowner.

Lane's draft also calls for a change in the regulation regarding the posting of private property: "Landowners are not required to post their land for this ordinance to be enforceable." The final piece of Lane's draft calls for each hunting dog to wear a collar with a tag that states its owner's name, address, and phone number.

McClees thinks there's nothing wrong with the current Landowner Protection Act. "We've heard very few complaints since the enactment of [the law]," she said. "So far, we've been pleased with the results."

McClees also doubts a new law would solve the trespass problem. "I'm not sure [the dog problem] can be solved with legislation," she said. "I don't want to see us only relying on legislation to resolve problems among neighbors. I tell hunters, 'Get to know your neighbors. Ask if they have any complaints. Try to rectify the situation; don't get into arguments; try to work it out.' What I want is better relationships between [the] people that have been there and people that are moving in."

McClees adds that some landowners who are new to certain areas also take issue with the noise that the dogs make, even when the dogs aren't on their property.

Lane's frustration comes from more than just noise. "Land-use changes and population growth have made it very difficult for this sport to continue without negatively impacting others," he said. Lane says while there are good hunters, there are also bad hunters, and he has had firsthand experience with anonymous hunters who have threatened him.

"In the past, they have shot high-powered weapons into my property knowing that I live in the woods," he said. "They have waged a low-level conflict on me for over 20 years." Lane says that a Pasquotank County deputy once told him that "someone is going to get killed over this issue."
Go Back