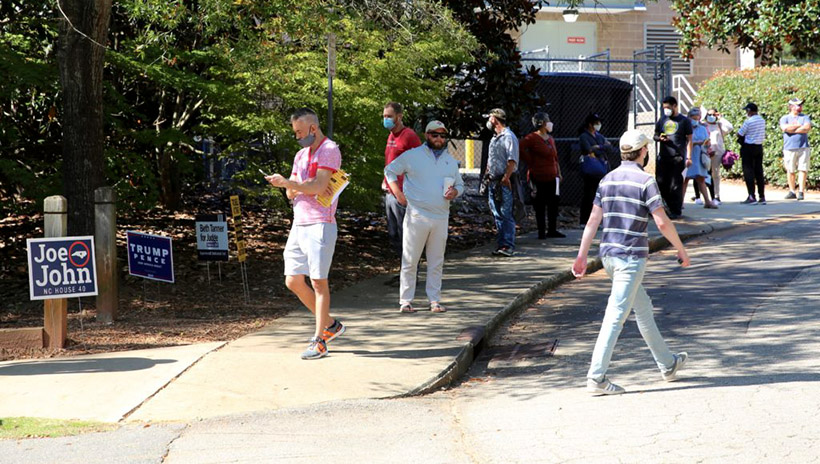 The election lawsuit merry-go-round keeps turning, as tens of thousands of North Carolinians cast ballots at early voting sites, and legislative leaders urge the State Board of Elections to "stop this chaos."

The most recent development happened Friday, Oct. 16. N.C. Superior Court Judge Bryan Collins refused to block a settlement between Democrat-led plaintiffs and the Democrat-controlled elections board that would loosen legal safeguards on absentee ballots. Collins said the N.C. Court of Appeals prevented him from acting when it issued a temporary stay Thursday, stopping the board from imposing the settlement until at least Monday, when the appeals court will hear from the parties.

The settlement was worked out in closed session last month by the state board and a union-backed group, N.C. Alliance of Retired Americans — represented by Democratic legal heavyweight Marc Elias. The deal would have removed the requirement for absentee ballots to include a witness signature; allowed voters to place absentee ballots in unmanned drop boxes; and extended the deadline for elections board to receive and count absentee ballots after the election from three days to nine days.

The board's changes would have modified state law without the legislature's approval — a violation, lawmakers say, of the U.S. Constitution. The law passed in June to make voting safer and easier during the COVID-19 pandemic. The rules changes also would take effect after more than 1 million ballots have been cast absentee, either by mail or at early-voting sites. Three lawsuits either challenge or defend those changes.

Republican legislative leaders asked for the appeals court stay on Tuesday. The court told the parties to file briefs no later than 5 p.m. Monday, Oct. 19, and hinted it would decide quickly whether to allow the settlement or toss it.

The witness requirement was restored in an order issued Wednesday by U.S. District Court Judge William Osteen. In the Democracy NC vs. State Board of Elections lawsuit, Osteen slammed the elections board's deal to eliminate the witness requirement as "a flagrant misuse of this court's injunctive relief."

Osteen didn't touch the other two rules changes. Even though he suggested they might be illegal, he wouldn't address them because the election was under way.

Osteen also is overseeing lawsuits filed against the state board by voters, candidates, and GOP officials.

On Thursday, legislative leaders asked Osteen to issue a temporary stay blocking those two rules while lawmakers asked the 4th U.S. Circuit Court of Appeals to step in.

Meantime, the N.C. Supreme Court — which has a 6-1 Democrat majority — could intervene and overturn the N.C. Court of Appeals' order, letting the election rule changes take effect, unless the state justices are blocked by a federal court.

A news release issued Friday by Senate Elections Committee co-chairmen Warren Daniel, R-Burke; Ralph Hise, R-Mitchell; and Paul Newton, R-Cabarrus noted the "chaos" has worried Democratic Party activists. The senators said the state board could end the confusion by dropping the settlement and embracing the law passed in June.

The senators said Guilford County elections board member "Rev. T. Anthony Spear[man], who also leads the N.C. NAACP, told national media that he blames the State Board of Elections for the chaos. He told CNN: 'I fault the state board. People are losing confidence. People are losing trust in the election cycle.'"