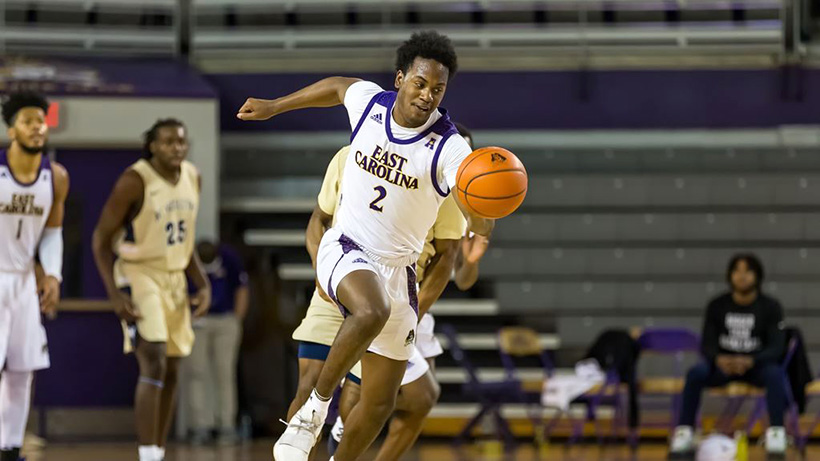 GREENVILLE, N.C.     The top two scorers in the American Athletic Conference will collide when East Carolina visits SMU in their conference opener for both teams Wednesday night in Dallas.

Junior Kendric Davis of SMU and Jayden Gardner of East Carolina, both preseason first-team all-conference selections, rank one and two in the league in scoring as league play begins. Through four games Davis is averaging 21.3 points, 8.0 assists and 2.5 steals per game. Gardner has averaged 20.2 points and 8.0 rebounds per game, including 3.0 offensive boards.

Both teams enter the game unbeaten with ECU (5-0) off to its best start in eight years while SMU (4-0) has won each of its first four games to begin the season for the third time in five years under coach Tim Jankovich.

The Pirates are coming off a gritty 73-67 win over a pesky North Florida squad on Thursday. ECU outscored the Ospreys 7-0 down the stretch to remain undefeated behind 20 points and 12 rebounds from Gardner as well as 16 points off the bench from J.J. Miles.

SMU hasn't taken the court since its buzzer-beating victory at Dayton 11 days ago. Emmanuel Bandomuel's floater from the left side with 0.2 left on the clock capped an improbable finish to a game the Mustangs trailed for more than 30 minutes and never held more than a three-point lead. Davis scored 21 points to lead the Mustangs and Bandoumel added 19.

Four players are averaging double figures for SMU, who own the league's top offense with 89.0 points per game. The Mustangs enter league play as The American's top 3-point shooting team (.385) and has the widest rebounding margin (+11.2) of the any team in the 11-member conference.

East Carolina ranks third in both scoring offense (76.3 ppg) and defense (62.8 ppg) and is second to the Mustangs in 3-point field goals percentage (.380).

Miles, who was named to The American's weekly honor roll Monday after going a combined 9 of 10 outside the arc in two games last week, leads the league in 3-point field goal percentage at 56.3 percent.

ECU snapped a 10-game losing streak to SMU in the first of their two meetings last season as Tristen Newton buried a 3 in the closing seconds for a 71-68 victory. Gardner led the Pirates with 20 points and nine rebounds while Newton was one of three Pirates to score 11 points.

Less than two weeks after their first meeting, SMU posted an 84-64 win for their fifth straight home victory against ECU, who is 2-7 all-time at Moody Coliseum. Gardner had 18 points for the Pirates, but the Mustangs buried 15 3s.