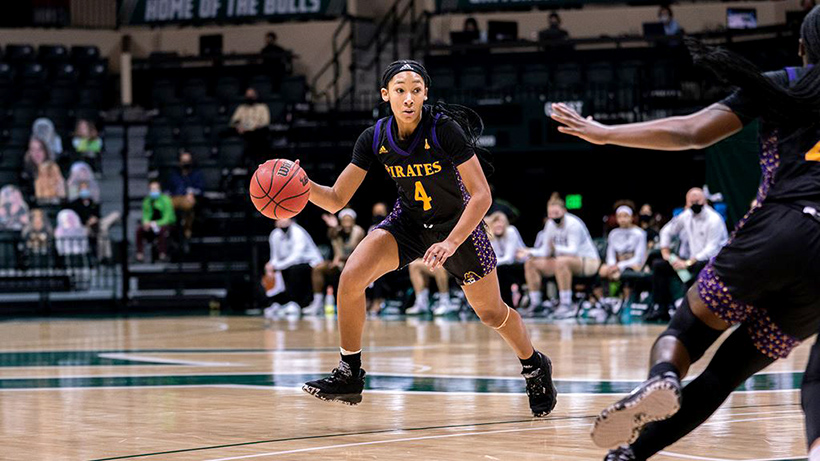 GREENVILLE, N.C. — East Carolina attempts to bounce back from its first American Athletic Conference loss of the season when it hosts Temple Wednesday evening inside Williams Arena at Minges Coliseum.

Tipoff is scheduled for 6 p.m., and the game will be streamed live via ESPN+ with Patrick Kinas (play-by-play) and Debbie Taylor (analyst) on the call.

The Pirates, owners of a 5-4 overall record, fell to 3-1 in league play Saturday afternoon with a 71-58 setback at the hands of then No. 21 USF in Tampa. The Bulls converted 28 of 36 free throw attempts and out-rebounded ECU 48-30, using a late fourth-quarter run to pull away for the win. Lashonda Monk and Sierra DaCosta netted a team-high 13 points while Monk added three assists and four steals on the way to AAC Weekly Honor Roll recognition.

Monk leads three Pirate players averaging double figures in the scoring column, putting up 15 points per game — a mark that ties her for fourth in the league. Taniyah Thompson (12.3 ppg) and DaCosta (12.0 ppg) are the others. As a team, East Carolina is averaging 59.9 points, 33.2 rebounds, 10.0 assists, 12.0 steals and 2.8 blocks per game. The Pirates lead the American Conference in both steals per game and turnover margin (+6.1). Nationally, ECU ranks 10th in total steals (108), 17th in steals per game, 20th in turnover margin and 23rd in turnovers forced per game (21.22).

Scouting Temple     Temple brings a 2-3 overall record and 2-0 American Conference mark to Greenville for its first league road contest. The Owls fell to Villanova, Florida Gulf Coast and then No. 4 South Carolina in non-conference play before bouncing back with consecutive victories over SMU and Tulsa at home. AAC Co-Preseason Player of the Year Mia Davis paces the unit in points per game (22.4) and rebounding average (10.1) while Alexa Williamson is putting up double figures in the scoring column with 10.2 per outing. As a team, Temple is averaging 64.8 points, 42.0 rebounds, 12.8 assists, 6.4 steals and 4.0 blocks per game while shooting the ball at a 39.9-percent clip from the floor. Tonya Cardoza is in her 13th season as the Owls' head coach and owns a 229-165 record at Temple.

The Temple Series     Temple leads East Carolina 7-2 in a head-to-head series that dates back to 2015 and the Pirates' entry into the American Athletic Conference. The teams split a pair of meetings last year as ECU defeated the Owls 56-50 during the regular season before Temple knocked off the Pirates 67-57 in the AAC Tournament.

1K Club     DaCosta is just 11 points shy of reaching 1,000 scored for her career. She spent three years with head coach Kim McNeill at Hartford, earning America East Conference Rookie of the Year accolades in 2016-17 before garnering third-team all-conference laurels as a junior. DaCosta has averaged no less than 9.8 points per game in any season of her collegiate career.

Instant Impact     East Carolina received a boost Dec. 16 when the NCAA granted immediate eligibility to all Division I transfers. Junior Maddie Moore, a 6-3 forward who joined the squad after two years at UNC Charlotte, suited up for the Purple and Gold for the first time in the win at Cincinnati and made an impact — scoring 10 points. She followed that up with a 10-point outburst in the victory over Tulane.

American Athletic Conference Women's Basketball Championship     The 2021 and 2022 American Women's Basketball Championships will be held at Dickies Arena in Fort Worth, Texas. The 14,000-seat arena, which opened in the Fall of 2019, features two premium club spaces, 40 suites, 32 loge boxes and a warmup arena that can stage a full practice court. The American basketball tournaments are scheduled to be held in the same city and venue for the first time in conference history. The 2021 women's tournament will feature each of the league's 11 teams in a single-elimination tournament. Three first-round games will take place on Monday, March 8, followed by four quarterfinal matchups on Tuesday, March 9. The semifinal contests will be played on Wednesday, March 10, with the championship game slated for Thursday, March 11.

Up Next     After battling Temple, ECU returns to the road Saturday (Jan. 9) for an American Athletic Conference showdown with Wichita State at Koch Arena. Tipoff is slated for 3 p.m.