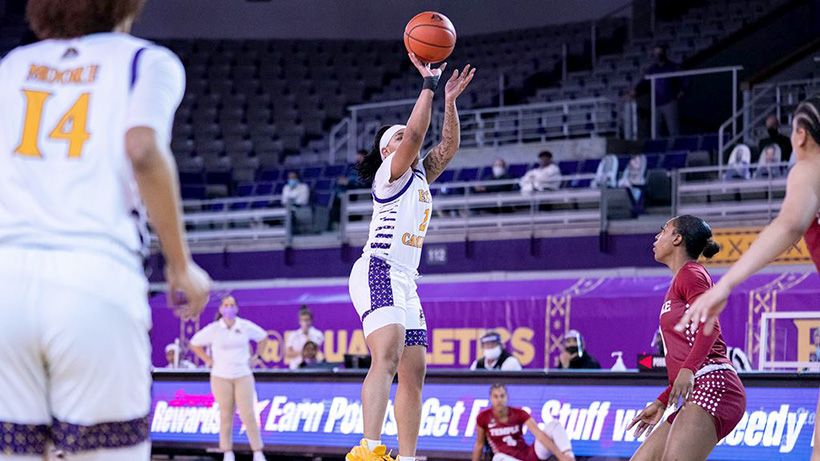 The contest is scheduled for a 6 p.m. tipoff and will be streamed live via ESPN+ with Chris Edwards (play-by-play) and Brittany Hoyt (analyst) on the call.

The Pirates (5-5, 3-2 AAC) were set to travel to Wichita State for a Saturday afternoon matchup last weekend, but the Shockers paused team activities due to COVID-19 issues within the program.

In its most recent outing a week ago, ECU dropped a 66-57 home decision to Temple who remained unbeaten (4-0) in AAC play. The Owls led by a single point entering the fourth quarter and pulled away as the Pirates missed their first 10 shots from the field in the period.

Lashonda Monk scored a team-best 17 points while Taniyah Thompson finished with 12 points and six rebounds. Ryann Evans finished the night with a season-high and squad-leading seven boards (three offensive). East Carolina was unable to find its shot in the second half, hitting just seven of 32 from the field, while ending up at 33.3 percent (21 of 63) for the evening. Conversely, the Owls converted 11 of 26 in the final 20 minutes and shot the ball at a 41.7-percent (25 of 60) clip overall. Temple won the rebounding battle 43-37 while also recording more assists (20-12) and steals (9-8). The Pirates hit a season-high nine three-point field goals, including four by Monk.

Monk (15.3), Thompson (12.3) and Sierra DaCosta (10.9) are all averaging double figures in the scoring column and Tiara Chambers, who has missed the last two games with an injury, still tops the squad in rebounding average (6.3 rpg). Monk and Dominique Claytor have collected a team-high 25 steals apiece.

Scouting UCF     UCF brings a 5-2 overall record and 3-1 mark to Greenville for Wednesday's affair. The Knights lost their first American Athletic Conference game of the year by a 61-58 margin Saturday at Temple. Like East Carolina, UCF boasts a trio of double-digit scorers on average in Courtajia Sanders (13.0), Diamond Battles (11.0) and Brittney Smith (10.0) while Masseny Kaba leads the squad in rebounding average (6.0). As a team, the Knights are putting up 58.1 points, 35.7 rebounds, 13.1 assists, 19.9 turnovers, 9.1 steals and 3.4 blocks per game and are shooting the ball at a 43-percent clip from the field. UCF is limiting its opposition to just 51.9 points a contest and ranks ninth in the nation in the statistic. Katie Abrahamson-Henderson is in her fifth season as the Knights' head coach.

The UCF Series     East Carolina owns a 13-10 advantage in the series with UCF dating back to 2006 when the Pirates and Knights were members of Conference USA. UCF has won the last five meetings, including a 91-55 decision in the teams' lone meeting of the 2019-20 campaign. The Pirates are 9-2 against the Knights at Minges Coliseum.

1K Club     DaCosta is just eight points shy of reaching 1,000 scored for her career. She spent three years with head coach Kim McNeill at Hartford, earning America East Conference Rookie of the Year accolades in 2016-17 before garnering third-team all-conference laurels as a junior. DaCosta has averaged no less than 9.8 points per game in any season of her collegiate career.

Playing For A Century     Four Pirates are within striking distance of suiting up for their 100th career games in the Purple and Gold - Justice Gee (99), Dominique Claytor (99), Lashonda Monk (98) and Raven Johnson (93).

Up Next     ECU wraps up its two-game homestand Saturday at 3:30 p.m. against American Athletic Conference foe Houston.