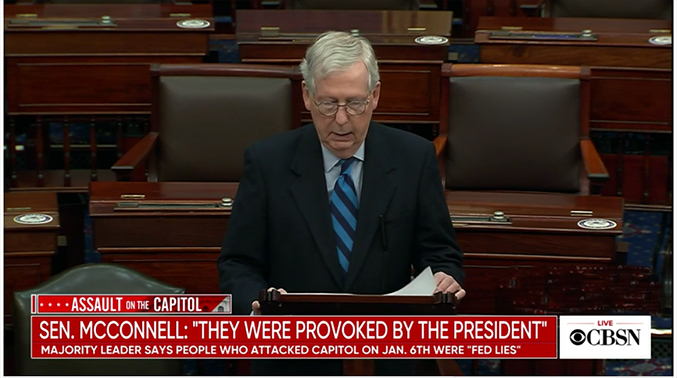 Joseph Farah, writing at WND.com, explains why Mitch McConnell stabbed Donald Trump in the back:

Republicans like to talk about Nancy Pelosi, Dianne Feinstein, Barbara Boxer and Eric Swalwell among other politicians cozy with Chinese Communists – especially those who will swear eight ways to Sunday that the gravest threat to the U.S. still comes from Russia.

It's not just Henry Kissinger, Joe Biden, Jeff Bezos and the New Tech Elite who have gotten rich serving China at the expense of their homeland, America.

I'd like to introduce you to the first family of the GOP – Mitch McConnell and Elaine Chao.

Until Wednesday afternoon, Mitch McConnell is the Senate majority leader. His wife, Elaine Chao, was secretary of transportation until Jan. 6 – the day of the Capitol melee.

Here's what she said then: "Yesterday, our country experienced a traumatic and entirely avoidable event as supporters of the president stormed the Capitol building following a rally he addressed. As I'm sure is the case with many of you, it has deeply troubled me in a way that I simply cannot set aside."

McConnell congratulated Joe Biden for being president-elect on Dec. 15, while President Trump was still trying to "Stop the Steal." McConnell is said to privately back Trump's impeachment and publicly stated, "The mob was fed lies. … They were provoked by the president."

How do we explain this antipathy of both McConnell and Chao toward their president?

McConnell and Chao were married in 1993. Critics of Chao have always worried that her ties to Chinese business interests present a conflict. Her China-born father, James S.C. Chao, had a cozy relationship with then-Communist Party leader Jiang Zemin and owned a shipping company that does business with the Chinese government.

But it's her relationship with the shady Lippo Group that really caused worries.

A review of financial assets held over a six-year period by Chao and McConnell revealed that Chao, a former Cabinet officer, had served as director of the Chinese company. Its chief executive James T. Riady had agreed to plead guilty to a felony charge of defrauding the U.S. government. Prosecutors said he funneled foreign donations to the campaigns of Bill Clinton. And Lippo's man in the U.S., John Huang, was convicted of campaign fraud in 1999.

Senate financial-disclosure records showed that, over a four-year period, Chao held a seat on the board of Protective Life Corp., which owned 50% of CRC Protective Life Insurance. Lippo co-owned the rest of the Hong Kong-based unit with China Resources Holdings Co., an intelligence-gathering front company for China's People's Liberation Army.

But the way Chao really scored big was by temporarily turning the conservative Heritage Foundation into a pawn for the Chinese. One of her assets had been Heritage donor Maurice "Hank" Greenberg, with AIG, a pro-China lobbyist whose insurance company has done business with China.

For a time, Chao and Greenberg made anti-China scholars as rare as hens' teeth at Heritage. Greenberg and AIG have donated a fortune to McConnell. The Kentucky Republican happens to be one of Capitol Hill's biggest China boosters.

While we're working on cleaning out the dead-wood RINOs like Rep. Liz Cheney, we had better take a long look at Mitch and Elaine too.