Observer Commentary--The leftwing nuts who hate Donald Trump now are shifting their hatred to include anyone who supports/ed Trump.  Now it is Franklin Graham.  We urge you to send a donation to the Samaritan's Purse to show your support for Rev. Graham. 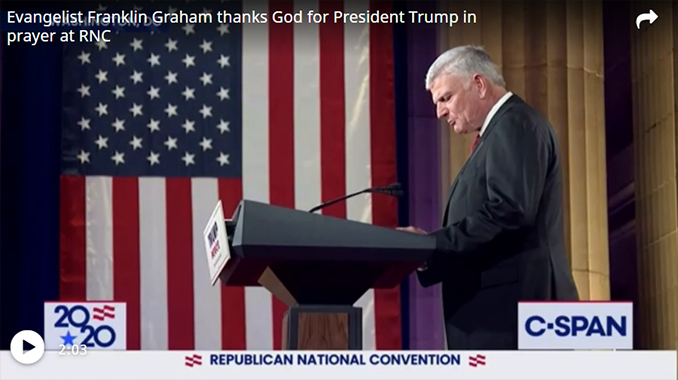 Hayley Fowler, writing for the News and Observer reports:

Thousands of people are calling for the evangelist Franklin Graham to be fired for supporting Donald Trump after armed rioters stormed the U.S. Capitol in the president’s name.

As of Tuesday afternoon, more than 17,000 people have signed a petition by the Christian community Faithful America that pushes for Graham’s removal from Samaritan’s Purse and the Billy Graham Evangelistic Association. The petition, created Jan. 15, is addressed to the board of directors at both organizations.

Graham is the son of the late evangelist Billy Graham and is the chairman, president and CEO of Samaritan’s Purse and BGEA.

“Graham gets away with his hatred and conspiracy-theories by hiding behind the humanitarian work of Samaritan’s Purse and his late father’s name,” Faithful America said in the petition. “It’s time for Samaritan’s Purse and the Billy Graham Evangelistic Association (BGEA) to realize that by propping up Franklin’s unchristian extremism, they are abandoning their Gospel missions, undermining democracy, and helping incite white-nationalist sedition.”

The petition encourages board members to fire Graham or resign in protest.

Paul Saber, who serves on the board of directors for both organizations, told McClatchy News in a statement Tuesday that Faithful America “fabricated this lie that (Graham) incited violence at the Capitol.”

“The Boards of Directors for Samaritan’s Purse and the Billy Graham Evangelistic Association have expressed that they fully support Franklin Graham and are more than satisfied with the job he has done and is doing in leading these ministries,” Saber said. “Franklin Graham was not in Washington, D.C., and he did not encourage people to go to the Capitol on January 6.”

Armed Trump supporters stormed the Capitol on Jan. 6 as lawmakers met to certify the election results, with the violence resulting in the deaths of at least five people. Many have blamed the violence on the president, who urged his supporters to march to the Capitol during a rally Wednesday morning.

Graham subsequently called for unity on Twitter and urged Christians to pray for the incoming Administration. But Faithful America said Graham’s “idolatry” of Trump remained unshaken.

In a Facebook post Thursday, Graham compared the 10 Republicans who voted to impeach the president to the apostle Judas betraying Jesus.