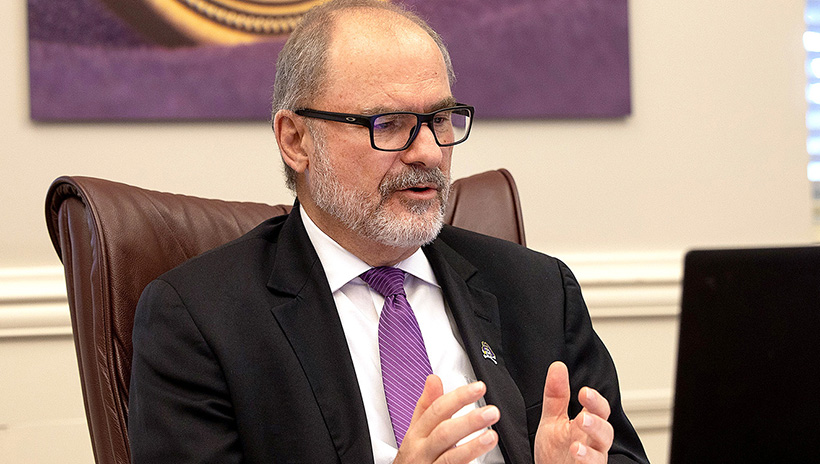 A year ago, East Carolina University was a very different place. But despite the challenges of the past 12 months, the university is strong and prepared for the future.

That was the message from Interim Chancellor Ron Mitchelson during Wednesday's State of the University address. As with many things these days, Mitchelson spoke virtually.

"I was pretty excited about what we were doing and when we were doing it," he said of the first few weeks of 2020. "Before March showed up, we were off and running with some tremendous face-to-face instruction."

But the spread of COVID-19 sent students home after spring break and put classes online. "We pivoted," Mitchelson said. "We went to remote instruction. Things changed; we really coped with it. A lot of passion for the university, a lot of compassion."

Since that time, ECU has tackled the challenges the coronavirus brought and, he said, come out strong.

For example, spring 2021 enrollment is up slightly compared to a year ago. Numerous organizations, such as Princeton Review and U.S. News & World Report, rank ECU highly in various categories. ECU is a more diverse campus than it was five years ago, retention rates are up among almost all demographics, and four-, five- and six-year graduation rates have climbed. The five-year rate exceeds nearly all of ECU's peer institutions.

"Whether it's the finish in four initiative we all worked on ... or the willingness of professors and student life to engage students and help them be successful, it's a community effort," Mitchelson said.

ECU also has more military-affiliated students than any other school in the University of North Carolina System. Research expenditures have more than doubled since 2016, topping $50 million. That 120 percent growth rate topped the latest Higher Education Research and Development Survey. The university is working to be more fiscally and environmentally sustainable.

In addition, ECU established the THRIVE (Towards Hiring, Resources, Inclusions, Value and Excellence) program to identify and eliminate organizational barriers that impede the full participation and advancement of diverse faculty in academic institutions — in ECU's case, particularly, to recruit and retain women in STEM fields. It's funded by a $1 million National Science Foundation grant. 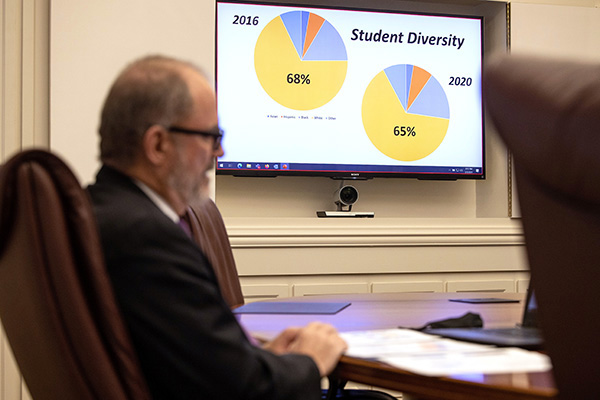 Speaking virtually, Mitchelson noted several accomplishments, such as ECU becoming a more diverse campus.
Looking ahead, the Life Sciences and Biotechnology Building is set to open in the summer, and ECU's Intersect East project promises public-private partnerships, jobs and innovation.

"This adaptive reuse of the landscape is something we can be proud of for years," Mitchelson said.

Finances have taken a hit due to the pandemic. Mitchelson said the university has reduced full-time equivalent positions by nearly 200, furloughed employees and frozen hiring. "We've done the difficult things of limiting expenses," he said. "We've been helped by two rounds of federal assistance."

Next month, ECU will welcome its newest chancellor, Philip Rogers — a Greenville native and former administrative leader at ECU. "I couldn't be more excited about the return of this great Pirate," Mitchelson said.

And as he looked back on his year-plus as interim chancellor and ahead to his upcoming retirement, he said the experience has been "humbling but rewarding."

"I'll be eternally grateful to this institution for the opportunity to serve and thankful to you for the commitment," he said.