Better stock up on ammo, regardless of how expensive it is, or learn to reload | Beaufort County Now | Reports are Biden will try to make it nearly impossible to manufacture ammo

Better stock up on ammo, regardless of how expensive it is, or learn to reload 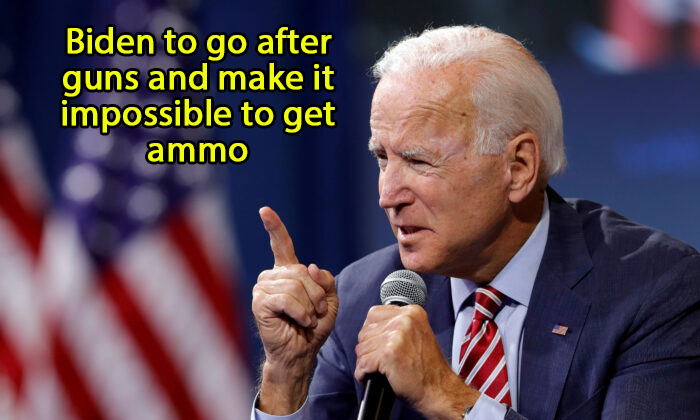 With control of the House, Senate, and White House as a backdrop, Biden administration officials in their meeting with gun control advocates conveyed confidence about enacting gun control legislation through legislative and executive actions that in the past had not gotten the votes.

White House Press Secretary Jen Psaki told reporters on Thursday that the Biden Administration is moving forward with fulfilling its “ambitious plan” of increasing gun control in the near future.

“During the campaign, President Biden laid out an ambitious plan to make our community safer. And that’s why in part, yesterday, senior members of his team … hosted a virtual discussion with leaders of gun violence prevention groups to discuss our shared goals,” said Psaki.

“We look forward to working with gun violence survivors and advocates and sharing more in the weeks and months ahead about our efforts to make our communities safer,” she added.

The main part of Biden’s gun control agenda includes banning the manufacture and sale of “assault weapons” and high-capacity magazines, regulating possession of existing assault weapons under the National Firearms Act, buying back these weapons and high-capacity magazines from citizens, requiring background checks for all gun sales, ending the online sale of firearms and ammunition, and providing more funds to enforce these laws.

The gun control groups who were in attendance at Wednesday’s meeting shared their optimism about getting gun control laws in place that had previously been blocked by the GOP majority in the Senate.

“This meeting provided more evidence that the Biden Administration is committed to being the strongest we’ve ever seen on gun safety,” said John Feinblatt, president of Everytown for Gun Safety, said in a joint press release.

Among the topics discussed at Wednesday’s meeting were steps that can be taken to close background check loopholes, stopping the sales of unregulated and untraceable “ghost” guns, and expanding violence intervention programs.

Shannon Watts, founder of Moms Demand Action, said she is confident that the public will see gun control executive and legislative action in the near future.

“In 2013, after gun safety stalled in the Senate, President Biden stood by former Congresswoman Giffords and vowed to fight the gun lobby and that the time would come for change. That moment has arrived,” said Peter Ambler, executive director of Giffords.org, referring to former Rep. Gabrielle Giffords (D-Ariz.).

Giffords is a gun control group founded by former Congresswoman Giffords, who was shot in the head by a gunman in 2011 at a “Congress On Your Corner” constituent event in Tucson, and where six people were killed and 12 were injured.

In addition, Kris Brown, the president of Brady, praised the Biden Administration’s willingness to take “decisive action” against gun violence.

“They know that this is a public health threat and that there isn’t a moment to waste. This administration is prepared to take a whole-of-government approach to keep Americans safe and Brady looks forward to working with them to do so,” said Brown in a Thursday press statement.

The Brady organization was named after Jim Brady, former press secretary for Ronald Reagan who in 1981 became permanently disabled from a gunshot wound during the attempted assassination of the Republican president.

Meanwhile, gun rights groups are encouraging members to demand that their state and federal lawmakers advocate for gun owners by protecting the Second Amendment. Colorado’s Rally for Your Rights members are gearing up to fight local and federal legislation that infringes on their Second Amendment rights to own a gun for self-defense.

The National Rifle Association (NRA), has urged members “to make their voices heard in opposition to any infringement upon their constitutional rights.”

The 117th U.S. Congress has filed a half dozen gun control measures with the House Judiciary Committee and includes Rep. Bobby Rush’s (D-Ill.) H.R.30, which would punish and deter firearms trafficking and Rep. Al Green’s (D-Texas) H.R.167, which would prohibit the transfer of a firearm at a gun show by a person who is not a federally licensed firearms dealer.

Rep. Sheila Jackson Lee (D-Texas) has filed four gun control bills including H.R.127, which would require the licensing of firearm and ammunition possession and the registration of firearms and to prohibit the possession of certain ammunition.

Gun rights groups have called H.R. 127 “The Gun Apocalypse” because the bill would require expensive psychological evaluations for multiple family members before being able to purchase a gun.

Hat tip to Buzz Cayton for sending us this link

“Biden wants to ban our semi-auto rifles, tax our guns/mags & more. He knows the only thing standing in his way to DISMANTLE THE 2ND AMENDMENT is NRA. Gun owners must stay vigilant & be engaged in elections and the legislative process,” The NRA told its members.