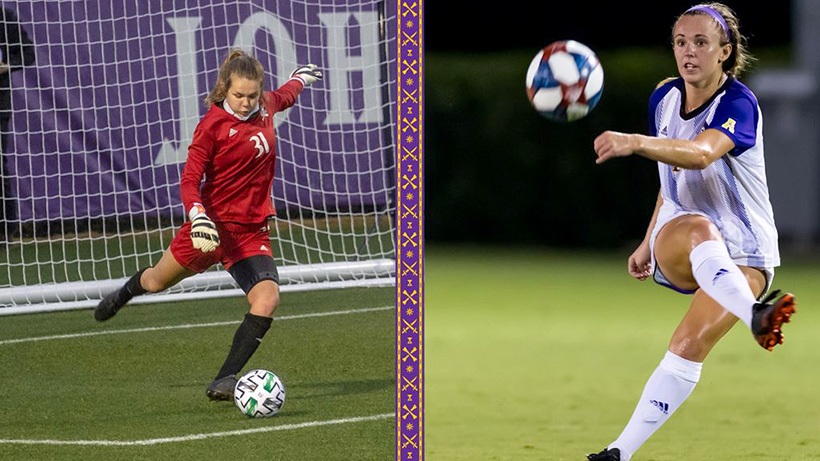 GREENVILLE, N.C.     After allowing just one goal over 185 minutes in the opening two games, the ECU soccer team had a pair of players earn AAC Weekly Awards, as Carsen Parker was named the AAC Defensive Player of the Week while Maeve English was named the AAC Goalkeeper of the Week, as announced by the league office on Monday.

English jumped right into the starting lineup as a freshman and has played like an experienced veteran. She allowed just one goal in her first career start, making three saves against Old Dominion. She was even better in her first AAC contest, making five saves to complete her first career clean sheet. Her biggest save of the day came in the 89th minute when she made a diving stop on a Houston shot to preserve the tie.

"Maeve has had a fantastic start to her career," said head coach Jason Hamilton. "Asking a freshman to step in as a goalkeeper is a tough thing to do at this level. I think this will be one of many honors we see her receive over her career."

Parker has played all 185 minutes in the center of the Pirate defense. The senior from Cumming, Ga., was a major reason the Pirates have only allowed the single goal in two games. Along with her contributions on the defensive end, Parker added the biggest goal of her ECU career in the win over Houston. The two teams went to overtime for the third straight season and the Pirates were looking for their first win in that span. Five minutes into the opening stanza, Parker was the quickest to a loose ball in the Houston box after a Morgan Dewey cross and she buried it into the roof of the net for the game-winning goal.

"I could not be happier for Carsen to get this recognition," Hamilton said. "She has logged a lot of minutes over the past few seasons and sometimes is hidden in the shadows of some of the others we have around her. This is a good representation of a strong group we had and still have in the backline."

English becomes the fifth Pirate to be named the AAC Goalkeeper of the Week, but the Greenville native is the first to receive the honor as a freshman. Parker is the third ECU player to be named Defensive Player of the Week, joining her current center-back partner Kim Sanford. It is the third time in three seasons under Hamilton that the Pirates have had multiple players honored in the same week.

The Pirates will return to the pitch on Saturday, Feb. 20 when they head to VCU for a 2 PM, contest.