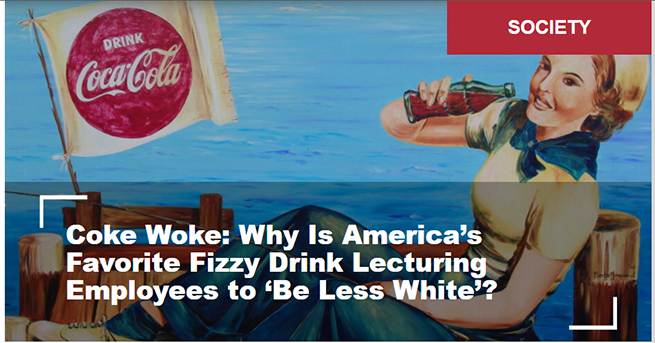 Instead of having the good sense to understand the dangers of embracing and propagating bigoted myths about an entire race of people, the management at Coca-Cola seem to have embraced it.

A whistleblower inside of the Coca-Cola Company has revealed the shocking bullet points of a training seminar that expounds the racist idea that character traits allegedly inherent to the pale face tribe – like oppressiveness, arrogance and lack of apathy – should be rejected. Has corporate America finally crossed the line of acceptability?

In these crazed days of hyper political correctness, when it is verboten to point out the physical differences between racial groups, to the point where ‘cultural appropriation’ is actually a thing, it is hard to imagine that one of America’s largest transnational corporations would promote stereotypes against the approximately 50 percent of people on the planet who make up the Caucasian race, not to mention its consumer base. But that is exactly what Coca-Cola, in cooperation with academia, has done.

“To be less white is to be less oppressive, be less arrogant, be less certain, be less defensive, be less ignorant, be more humble, listen, believe, break with apathy, break with white solidarity,” the page reads, before advancing to the dangerous conclusion that white people feel themselves “superior” on the basis of nothing more than their skin color.

To fully appreciate how offensive that paragraph is, or should be, simply substitute the term ‘white’ with any other racial identification – black, Asian, Spanish. The lewd lecture, however, does not end there.

“In the U.S. and other Western nations, white people are socialized to feel that they are inherently superior because they are white,” according to the slide show. “Research shows that by age 3 to 4, children understand that it is better to be white.”

🚨🚨🚨 BREAKING: Coca-Cola is forcing employees to complete online training telling them to "try to be less white."

These images are from an internal whistleblower: pic.twitter.com/gRi4N20esZ

Now imagine what may happen during a staff meeting when a white Coca-Cola executive wants to suggest an alternative plan of action, or simply speak his mind. Fellow colleagues will be tempted to roll their eyes in disdain while thinking, “there goes another closet white supremacist, trying to dominate the room with their privileged sense of superiority.” This type of not-so-subtle indoctrination, which promises to go mainstream under the Biden administration, may even cause white people to become more withdrawn and “less certain,” for fear of appearing like one of those grotesquely caricatured white people that everyone – and not least of all white people themselves – are fretting over.

Take Robin DiAngelo, for example, the diversity consultant who supplied Coca-Cola, and a number of other corporations with the above talking points on the evils of “inherent white racism.” DiAngelo, the author of the New York Times 2018 bestseller ‘White Fragility: Why It’s So Hard For White People To Talk About Racism,’ takes the position that “even a minimal challenge to the white position [of supremacy] becomes intolerable, triggering a range of defensive moves including: argumentation, invalidation, silence, withdrawal and claims of being attacked and misunderstood. These moves function to reinstate white racial equilibrium and maintain control.”

That’s a pretty harsh indictment against white people, especially considering that the United States is one of the most culturally diverse countries in the world, and one which has allowed millions of minorities – through a gaping hole in the US-Mexico border, no less – to join its ranks. I would be among the first to point out America’s failures and problems, but full-blown racism – while certainly latent among a very narrow and insignificant subgroup of the population, and not just among whites – is nowhere near the epidemic proportions that DiAngelo wants her readers to believe it is. In fact, even Black Americans have taken exception with such notions.

Writing in The Atlantic, John McWhorter, professor at Columbia University, described DiAngelo’s ‘White Fragility’ as “the prayer book for what can only be described as a cult,” that teaches the reader “how to be racist in a whole new way.”

“I have learned that one of America’s favorite advice books of the moment is actually a racist tract,” McWhorter writes with refreshing courage from the college campus, especially considering the threat of banishment for simply questioning the leftist inquisition. “Despite the sincere intentions of its author, the book diminishes Black people in the name of dignifying us. This is unintentional, of course, like the racism DiAngelo sees in all whites.”

McWhorton then proceeds to describe his own experience as a Black man growing up in the United States, which I would imagine mirrors those of many others.

“In my life, racism has affected me now and then at the margins, in very occasional social ways, but has had no effect on my access to societal resources; if anything, it has made them more available to me than they would have been otherwise…” he writes. “Being middle class, upwardly mobile, and Black has been quite common during my existence since the mid-1960s, and to deny this is to assert that affirmative action for Black people did not work.”

That is certainly not the rosier depiction of America circa 2021 that academics like DiAngelo want her readers to hear. But then again, she has the entire federal government supporting this deranged cause now that the Biden administration has rescinded the Trump administration’s executive order prohibiting Critical Race Theory training at the federal level.

Instead of having the good sense to understand the dangers of embracing and propagating such bigoted myths about an entire race of people, the management at Coca-Cola seem to have embraced it. Yet, as history has demonstrated on numerous occasions, notably during World War II with the deranged racial theories put forward with terrible efficacy by the Nazis, race-based stereotypes are one bus stop away from subjecting one group of people to outright violence, possibly even genocide.

At this point, one can only make wild guesses at the true purpose for such a program. One possible reason for corporate America deliberately fanning the flames of racial tension is to deflect attention away from the massive wealth divide, which, coincidentally, exploded in the very same year that Big Business, and various concerned philanthropists, like George Soros, was dumping huge amounts of money into various social justice groups, not least of all Black Lives Matter.

According to the New York Times, the donations represent “a huge financial undertaking that will support several Black-led racial justice groups for years to come.” Where this tremendous push at the corporate and governmental level will take race relations is not clear, but the writing is on the wall.

I honestly can’t comprehend how stupid and unbearable American woke-society is becoming.

Today, white people in the United States find themselves in the impossible position of having to prove they are not racist, when it is being argued at the academic level that feelings of “white superiority” is practically a genetic trait built into their DNA visible under a microscope. Therefore, as this warped quasi-logic goes, the crimes of their ancestors are their crimes too. Nothing that white people have done to correct past historical wrongs matters.

And therein lies the evil cunning behind this radical bunkum: the very moment a white person attempts to counter such odious claims, they will appear to be conforming to the very woke definition that has been attributed to them – oppressive, arrogant, defensive, confident, etc, etc. Even maintaining their silence, according to DiAngelo, is a sign and symptom of “white guilt.”

In other words, white people have no recourse against these outrageous claims, except to pray that more people across the political and racial divide will speak out against the madness. Otherwise, we may be heading for another horrific human catastrophe down the road, and probably sooner than anyone can imagine.

Who could have imagined just 10 short years ago that the simple act of “enjoying a Coke” could be loaded with so much unnecessary political baggage?