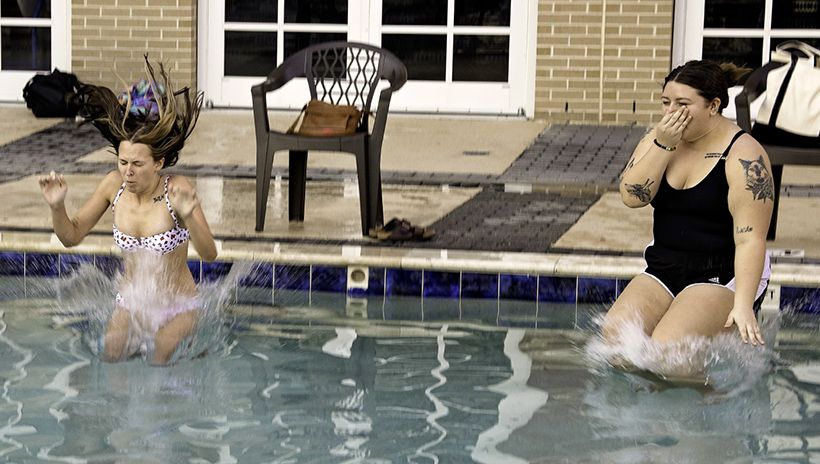 That countdown was followed by splashes, then shrieks and cheers as students, faculty and staff took turns jumping in the outdoor pool at the Eakin Student Recreation Center during the 25th annual Polar Bear Plunge.

The event, which started with about 35 jumpers, mostly faculty and staff, has become an ECU tradition, with hundreds of students participating each year.

Jon Wall, assistant director of sport and youth programs, said students love being a part of the tradition — and the free T-shirt. That was the case for Emma Thomas, a freshman who hopes to become a Pirate nurse, who said she expected it to be cold ... but it was even colder.

Autumn Gollick was back this year for her fourth Polar Bear Plunge. With outside temperatures in the 60s it was not her coldest jump. "But I mean, I'm not going to complain," she said.

Like Gollick, lots of students come back year after year, Wall said, but none of them have jumped in the icy pool as many times as "Papa Bear" Stephen Gray, director of disability support services, who has participated each year since the event began. Early on he would jump multiple times, but more recently he has simply stayed in pool for the duration, cheering on the students and making sure they get full credit for participation by going underwater to get their hair wet.

"The students absolutely love him, and the fact that he can sit in that cold pool forever," Wall said. "I mean, the dedication to be here every year and then be in the cold water — he loves the students and is great with them." 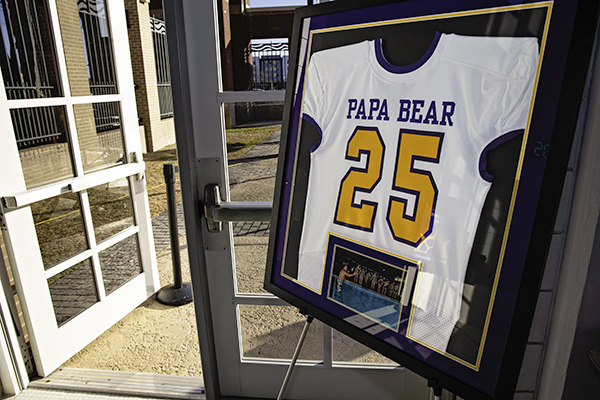 “Papa Bear” Stephen Gray has participated each year and was honored with a commemorative jersey.
Gray described the sensation of jumping in the icy water as "instantaneous." The water temperature for this year's event was 48 degrees.

"It just wakes your system up, and you open your eyes really bright and big and you see everything around you, and then you get out of the water really quick," he said.

Gray, who grew up in New England and learned to swim in the cold water of the Atlantic Ocean, said he never gets used to it, but it's not unbearable.

"I go and feel the water, and then I just take it and cover my body with water, so I get mentally prepared for it," he said.

A framed Papa Bear jersey was presented to Gray at the beginning of this year's Polar Bear Plunge, which he has announced will be his last.

"It's been something that I really cherish," he said, "to be a part of an activity that students can say they did and they'll remember for the rest of their life, even if it's for that one instant."

The plunge has become a mark of pride for students, some of whom come in groups to form a memory together. Residence halls, student organizations and athletic teams have been challenged to see who can generate the most participation.

Jason Pilkington, a recreation and park management major, jumped along with his girlfriend and several other friends. "I just wanted to see if I could do it and see just how cold it would be," he said. 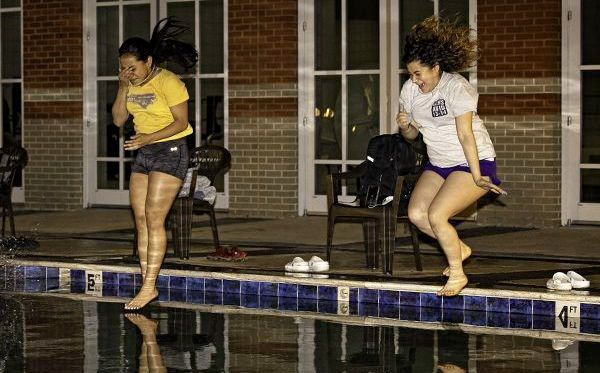 The temperature outside was not as cold this year, but the water was.
Pilkington said the jump was fun despite the smaller groups of jumpers due to COVID-19 precautions. Pre-registration was required, unlike in years past, and groups of 10 jumpers were spaced 10 minutes apart so that the chairs where they placed their towels and belongings could be sanitized. The event was spread out over a longer period, with 375 jumpers participating over nearly 7 hours instead of twice that many in 90 minutes.

The precautions left extra time for anticipation to build between jumps. Some jumpers waited even longer so that TV reporters could time their live shots with a jumping group. While she waited, first-time jumper Breya Robinson said, "I would have been more nervous if it had been colder outside."

Later, when she came out of the water, Robinson was still smiling, but she admitted, "It's cold!"

Gray said he would always remember standing in the water and looking at the faces of the students.

"Here are these 17-, 18-year-olds that are just in the wonderment of, 'Are we really going to do this?' And they joke with their friends and they're holding hands, and their eyes just pop out of their heads," he said. "If someone could do a video of just the faces when they come up, it would be priceless."