Student: Noah MacKay | Beaufort County Now | A fascination with astronomy and the mysteries of the universe pushed Noah MacKay far beyond stargazing. 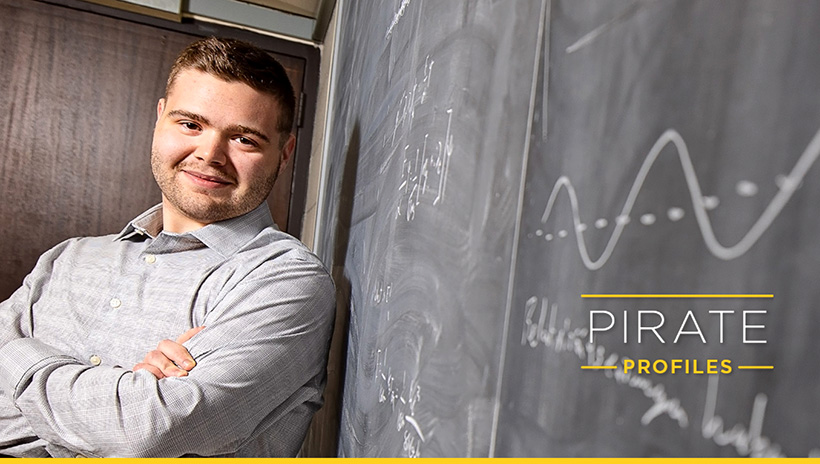 A fascination with astronomy and the mysteries of the universe pushed Noah MacKay far beyond stargazing.

Now in his first year in East Carolina University's graduate program in physics, MacKay is a teaching assistant and preparing for his thesis work while researching non-equilibrium noise with Dr. Martin Bier.

MacKay earned undergraduate degrees in physics and foreign languages and literatures with a concentration in German as well as a minor in math at ECU in 2020. Eventually MacKay plans to earn a doctoral degree in theoretical physics.

As a child, he became interested in astronomy and gravity, and would read encyclopedias and nonfiction books about science, geography and history. By eighth grade, he was hooked on math.

"It is the blending of science and math, and the ability to answer these universal mysteries that made me fall in love with physics," MacKay said. "I'm just eager to understand how nature works." 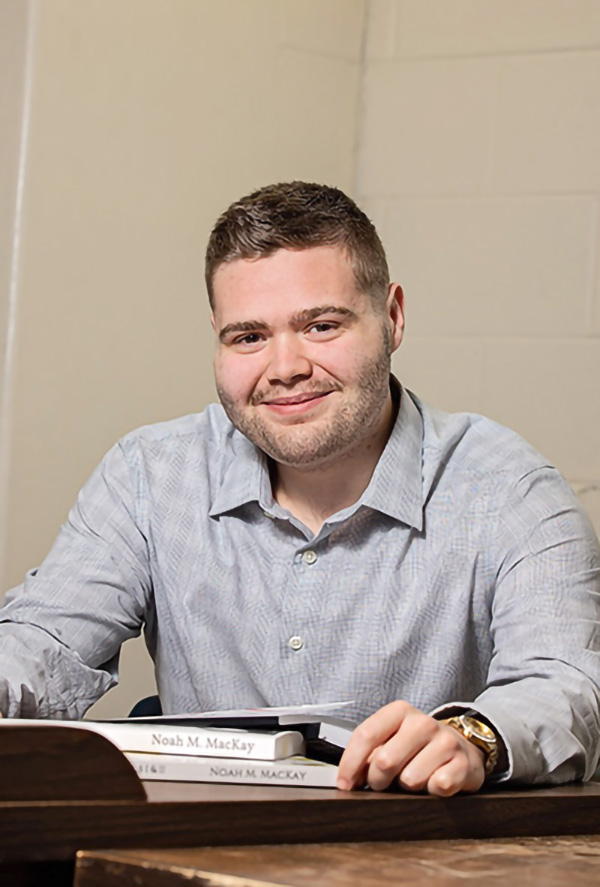 Graduate student Noah MacKay sits with some of the books he has written.
As an undergraduate, MacKay co-founded ECU's first official astronomy club, became a member of the Sigma Pi Sigma and Delta Phi Alpha honor societies, and co-published an article with an ECU faculty member on the German Republic-era poet and satirist Erich Mühsam.

In summer 2019, MacKay studied in Germany with other ECU students led by Dr. Susanne Jones. "For a small-town boy who had never left the country, going to Berlin was a mind-opening experience," he said. "I did think my studying obligations syphoned time away from exploring a city so rich in culture and history, but being there in the first place was still a treasure. If it weren't for me conquering my fear of flying, I wouldn't have been in the city my grandmother was born in."

Overcoming obstacles is nothing new for MacKay.

He was diagnosed with Asperger's syndrome when he was 8 after having been misdiagnosed five years earlier. "It was a long and bumpy road, but it led me to where I am today," he said. "I never saw autism as a negative downside or something to cringe at. I'm quite proud of my autism."

Graduate student Noah MacKay sits with some of the books he has written.

MacKay keenly listens to people and his surroundings, which has helped with his coursework, he said.

"For someone who understands equations and the intricate laws of science, I cannot understand, dissect and comprehend the changing 'yes and no's' of society and the nonchalant social queues," he said. "So I'm usually blunt and straight to the point. It is more honest that way, and I expect others to return the favor."

As an advocate for others with autism spectrum disorder, he encourages students to rise above their challenges and dispel negativity. While their voices may seem underappreciated, they are as provoking and valuable as those without a disorder. "Like all disabilities, there are challenges to face," MacKay said. "But once you rise above your challenges, you can make the impossible possible."

MacKay has explored a variety of possibilities with his writing and self-published books. He started writing fiction novels at age 15, creating a fantasy series called "Age of War." He also has written several poems in German. MacKay has written four volumes on mathematical physics titled the "The Theory of Physics." And he currently has an independently written scientific manuscript under review.

Role model: My parents, without whom I wouldn't have come this far.

Your words to live by: Go on the path least traveled, but always bring your passion with you.

What advice do you have for other students? Don't take everything you have for granted; work hard, be responsible and be respectful.

What is something cool about ECU that you wish you knew during your first year? That the faculty and peers in your major would become an extended family to you.