Corruption in the FBI should not be tolerated 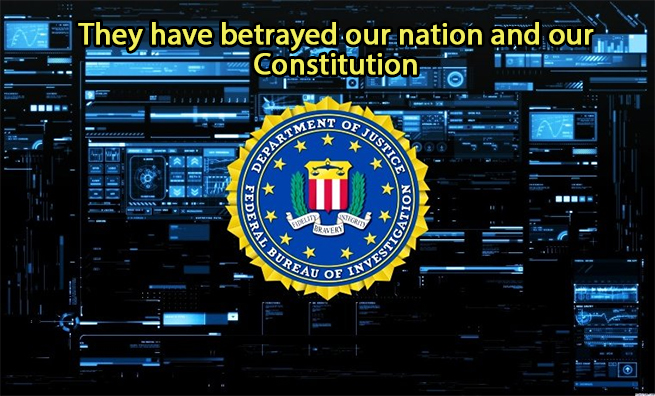 The American people, regardless of political affiliation, should be bellowing a primal scream of outrage in light of the new evidence–overwhelming evidence at that–of the FBI’s corruption. If you have not read John Solomon’s latest revelations about the contents of formerly classified FBI documents that were declassified one week before Donald Trump left Washington, DC, then you need to take the time. You can read it here.

Permit me to point out some background you need to appreciate the appalling gravity of these documents. In theory the FBI is not supposed to be a Secret Police (i.e., a GESTAPO). No FBI Agent or official is supposed to have the ability to wake up in the morning and decide to start investigating an American citizen just because the Agent does not like what someone has written or said. But we now know that world is our reality.

In theory, Special Prosecutor John Durham, could put the brakes on this lawlessness by indicting and convicting James Comey, Andrew McCabe, Peter Strzok, Lisa Page, James Baker, Bruce Ohr and others. Do not hold your breath. Durham appears to be a fraud and his failure to act will further embolden the FBI to engage in more illegal acts.

The FBI documents use code names for various members of the Trump campaign team. Here’s your cheat sheet:

But they were not the only ones targeted. These men also were put in the cross-hairs, without knowing the FBI was after them for the mere act of supporting Donald Trump:

Inspector General Michael Horowitz lied with his claim that Crossfire Hurricane was “properly predicated.” It was not. There was no justification for this massive counter intelligence investigation, which had only one purpose–help Hillary Clinton.

The key informant/spy in this operation is Stefan Halper, an obese bloodsucker whose father-in-law was a top level CIA officer in the 1970s:

Halper is an American foreign policy scholar and retired Senior Fellow at the University of Cambridge where he is a Life Fellow at Magdalene College.[1] He served as a White House official in the Nixon, Ford, and Reagan administrations, and was reportedly in charge of the spying operation by the 1980 Ronald Reagan presidential campaign that became known as “Debategate“. Through his decades of work for the CIA, Halper has had extensive ties to the Bush family.[2] Through his work with Sir Richard Billing Dearlove, he had ties to the British Secret Intelligence Service MI6.

Halper is referred to in the FBI documents as Confidential Human Source aka CHS.

Here are the key documents for your own perusal. Do not take my word for it:

The money quote from Solomon’s article is this:

Former FBI Assistant Director for Intelligence Kevin Brock said the information about Papadopoulos’ foreign lobbying that the bureau used to open the Russia collusion probe failed to meet the bureau’s own legal standards to justify the larger dragnet that encompassed Page and many other Trump officials.

“Normally when the FBI opens an investigation on a U.S. citizen, it has specific facts justifying an investigation of that person,” explained Brock, who led the implementation of many of the bureau’s current rules for informants and intelligence gathering. “But here what the ECs are saying is they don’t know who is involved and they are just conjecturing that someone in the Trump campaign might be in a position to receive help from Russia. You just can’t open a full field investigation on conjecture. .  .  .

“What they are doing is using preferred definitions,” he said. “When we employ the investigative techniques used against Carter Page to break the laws of another country and steal their secrets, it’s okay to call it spying. When we use those same techniques against a U.S. citizen, it’s called an investigation.”

Let us give the despicable Bill Barr credit for one thing. He told the truth about Obama. The Obama Administration was spying, illegally so, on Donald Trump and his campaign staff. We now know what a dishonored, disgraceful outfit the FBI has become. The FBI has betrayed the Constitution.

Source:  They Have Betrayed the Constitution - Overwhelming Evidence of FBI Corruption (thegatewaypundit.com)