Data on Covid deaths show the folly of lockdowns | Beaufort County Now | No significant difference in severity of pandemic between states that locked down and those that did not.

Data on Covid deaths show the folly of lockdowns

Jeffrey Tucker and his colleagues at the American Institute of Economic Research have been working overtime exposing both the horrific costs as well as the utter lack of any compensatory benefits of the economic carnage and spirit-crushing isolation that somehow became America’s go-to public health strategy against COVID-19 since this awful nightmare first began.

He’s even written a book on the subject whose title aptly sums up the choice we’ve been facing all along: Liberty or Lockdown.

Today on Twitter, however, Tucker posted an image compiled by a businessman named Keith Anderson that couldn’t possibly better exemplify that old adage about a picture being worth a thousand words.

It’s a simple bar-graph of the total number of COVID-19 fatalities each U.S. state has reported as of February 24, in ascending order, which was posted this morning at the invaluable website, Lockdown Skeptics.

The average number of fatalities suffered by states that imposed lockdowns last spring vs those that didn’t is also represented. And one important piece of information here is that states which locked down wound up with more reported COVID-19 fatalities on average than states that remained free.

But it’s the ingeniously simple color-coding scheme for the raw data that really makes the graph so potent. States that imposed lockdowns when the hysteria over COVID-19 began are represented in blue, while those that declined to do so are colored red. 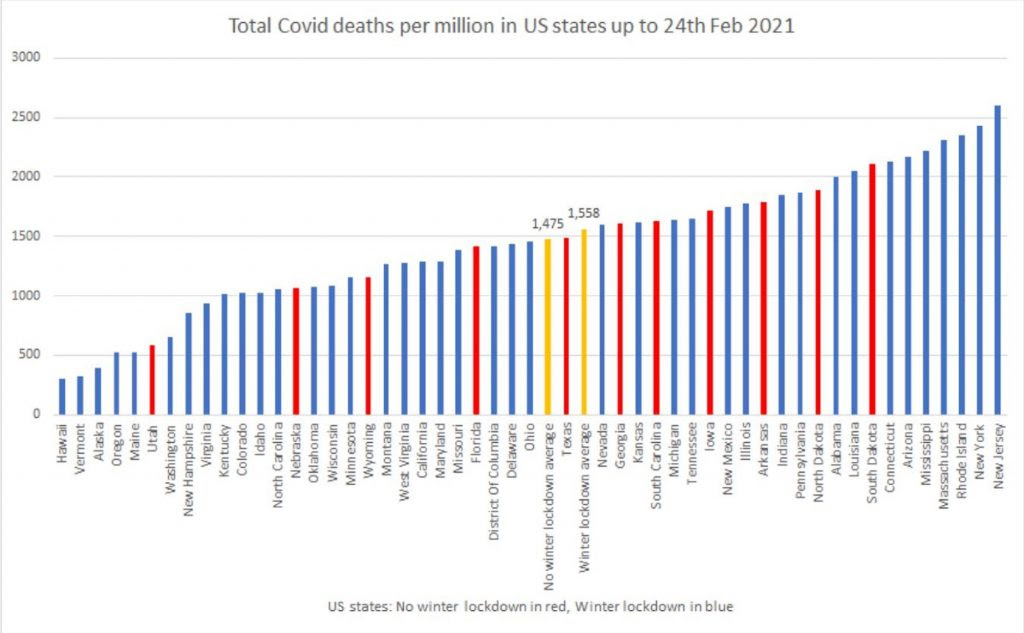 As you can see, apart from the free states doing slightly better on average than their locked down counterparts, the red bars representing the former couldn’t possibly be more randomly distributed among the latter.

Hence, the utter pointlessness of all the damage we caused to ourselves by defiling America’s founding commitment to individual liberty couldn’t possibly be more clear.

Source:  folly-of-lockdowns-exposed-in-one-graph – RedState  where you can access the active links and enlarge the chart.

Here's more:  Lockdowns Do Not Control the Coronavirus: The Evidence – AIER