NC Lt. Gov Mark Robinson to Newsmax TV: Conservative voices being silenced in schools | Beaufort County Now | Past time for conservatives to fight back like this 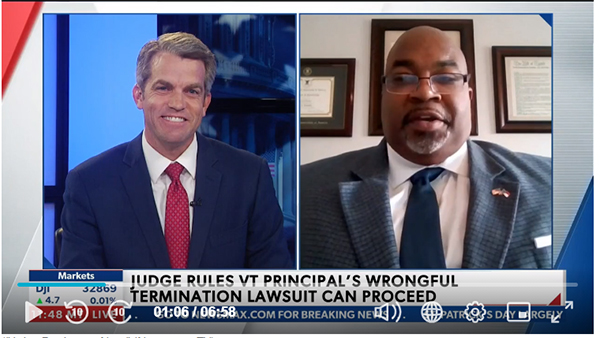 Click here to watch the video:  NC Lt. Gov Mark Robinson to Newsmax TV: Conservative Voices Being Silenced in Schools | Newsmax.com
North Carolina Lt. Gov. Mark Robinson says the firing of a principal in Vermont for making a Facebook post critical of the Black Lives Matter movement is another “blatant attempt to flat out discriminate against people because of their political ideologies."

“And that’s just not fair. It’s not the American way and it’s certainly something that should not be done in education,” Robinson said during an appearance on Newsmax TV’s “John Bachman Now.”

“What we’re doing here in North Carolina is that we have formed a task force to try to push back against some of these agendas we see going on.

“A lot of these schools try to pride themselves on being a safe space for everyone, where all voices are allowed in, where we want to hear everybody’s concerns. Unfortunately, sometimes that’s not the case.”

Robinson’s task force will collect complaints from parents, students, and teachers in public schools from across the state “who are literally afraid to speak up” to their school boards.

Tiffany Riley, who was principal of Windsor High School in Rutland, Vermont, from 2015-2020, was fired last summer after she said she did not agree with the “coercive measures taken to get” BLM’s point across, although she did write that she “firmly believes Black Lives Matter.”

She also wrote that, “While I want to get behind BLM, I do not think people should be made to feel they have to choose black race over human race.”

Robinson said voices like Riley’s shouldn’t be shut down, specifically in the education realm.

“Conservative voices are often pushed out of the conversation, not allowed, and labeled. And those are the very things a lot of these folks say they’re trying to avoid and those are the things we see happening,” he told host John Bachman.

“We cannot reach a solution without having an honest, open dialogue. When it comes to education, we have to make sure we are leaving these divisive, political conversations outside of the classroom.

“Everybody is entitled to their opinion, you are not, however, entitled to put your opinions onto impressionable young minds in the classroom.”

Riley is suing the school district, claiming she was wrongly dismissed and that her First Amendment rights were violated.