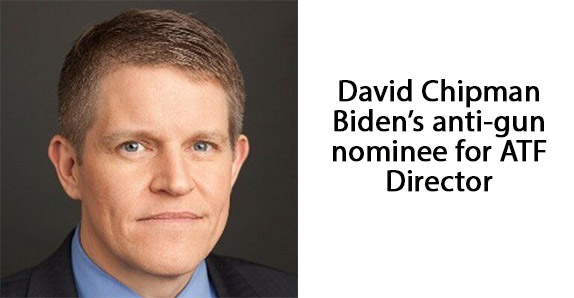 President Biden is nominating David Chipman, a former federal agent and adviser at the gun control group Giffords, to be director of the Bureau of Alcohol, Tobacco, Firearms and Explosives, the commander-in-chief announced Thursday.

Chipman would replace ATF acting director Regina Lombardo. During his time as a senior policy adviser with Giffords, he spent considerable effort pushing for greater regulation and enforcement on ghost guns, changes to the background check system and measures to reduce the trafficking of illegal firearms.

Chipman spent 25 years as an agent at the ATF. During his career, he worked on stopping a trafficking ring that sent illegal firearms from Virginia to New York, and served on the ATF’s SWAT team.

Chipman is a gun owner, according to The Associated Press.

He is an explosives expert and was part of the team involved in the investigation of the Oklahoma City bombing and the first World Trade Center bombing. He also was engaged in the probe of a series of church bombings in Alabama in the 1990s. He retired from the ATF in 2012.

Chipman, who lives in Washington, D.C., hails from Detroit and attended college at American University according to his Giffords biography. He received a master’s degree from Johns Hopkins University in management.

Gun-control advocates have emphasized the significance of the role of ATF director in enforcing gun laws, and Chipman is certain to win praise from this group.

Biden announced Chipman’s nomination on the same day he unveiled a half-dozen executive actions aimed at addressing a proliferation of gun violence across the nation that he called an "epidemic and an international embarrassment."

"The idea that we have so many people dying every single day from gun violence in America is a blemish on our character as a nation," Biden said during remarks at the White House.

He announced he is tightening regulations for buyers of "ghost guns" — homemade firearms that usually are assembled from parts and often lack serial numbers used to trace them. Also, a proposed rule, expected within 60 days, will tighten regulations on pistol-stabilizing braces like the one used in Boulder, Colorado, in a shooting last month that left 10 dead.

Gun control advocacy group Everytown for Gun Safety tweeted that it was "thrilled" about Chipman’s nomination.

"David will be an invaluable point person as this administration looks to fight illegal gun trafficking and end the special treatment of the gun industry," the Everytown tweet states.

The long-time gun control advocate added that "Chipman’s background at the ATF and his expertise in preventing gun violence make him an unparalleled choice for this nomination."

Her organization is unquestioned in its support of Chipman with Brown noting, "Brady urges the United States Senate to confirm him without delay."

Meanwhile, Tim Schmidt, president and founder of the U.S. Concealed Carry Association (USCCA), called it "deeply troubling" that Biden nominated someone who opposes the views of "record numbers of Americans [who] embraced their right to self-protection."

"It’s our hope that the Senate will carefully review this nomination and consider how confirming a lobbyist and advisor for one of the country’s most fervent anti-gun groups to now run the ATF will make America a safer place," Schmidt continued in an emailed statement to Fox News. "We don’t believe it will."

And Mark Oliva, director of public affairs for the National Shooting Sports Foundation, said Chipman’s nomination was "overt politicization of the bureau that regulates the firearm industry."

"Mr. Chipman was a registered lobbyist for the gun control group Everytown, before joining Giffords gun control in 2019," Oliva told Fox News. "The idea of a gun control front man leading the agency to regulate firearms is unacceptable."

Oliva said that gun control groups "would have howled if President Trump nominated someone from the firearm industry to run the ATF during his term in office."

"This is a troubling reversal of years of proactive safety cooperation between ATF and the firearm community," he continued. "The men and women of ATF have a difficult enough mission, they deserve a leader without a political agenda."